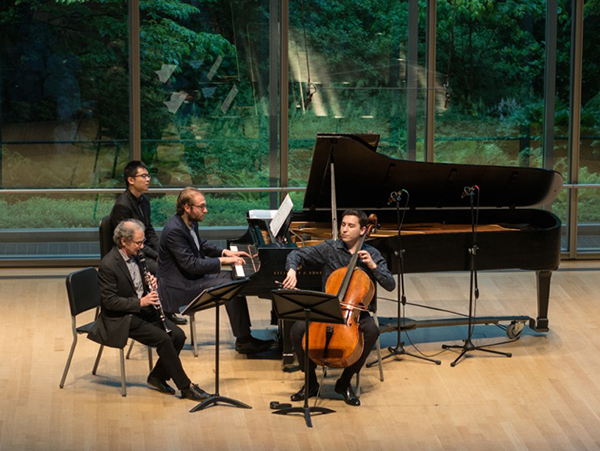 Pivotal moments in the lives of composers linked works by Louise Farrenc, Paul Hindemith, and Johannes Brahms for ChamberFest Cleveland’s third concert on Saturday, June 15 in CIM’s Mixon Hall. But that program was prefaced by Adam Golka’s new arrangement of Debussy’s La mer for two pianos, an hors d’oeuvre that could easily have been served up as a main course.

Before brilliantly playing his arrangement with fellow pianist Roman Rabinovitch, Golka noted that Debussy had himself made a four-hand piano version of his famous “three symphonic sketches” of the sea, but it necessarily left out nearly half of the details in the original. In addition to putting those back, in his reworking Golka incorporated inside-the-piano effects, imaginative use of pedals, sympathetic vibrations induced in one instrument by the other, and sonic coloring involving one of the piano lids.

The two pianos were set facing each other, Golka’s with the lid open and Rabinovitch’s closed. Near the beginning, Golka’s busy page turner leapt up and raised the lid on the other instrument, producing a nice swell in volume and crescendo of tone representing the sun emerging over the water.

The pianists made a formidable team, playing with exquisite coordination and bringing out all the nuances in Golka’s canny adaptation of Debussy’s liquescent score. It was easy to forget that they were producing such lustrous sounds by striking hammers on strings — but the percussive qualities of the piano allowed for sudden outbursts of color when needed.

The concert proper, titled “Turning/Tipping Points” included a piece that validated a woman’s prowess as a composer, another that represented for one composer the ascendency of the viola over the violin, and a third that inspired a veteran composer to jettison the idea of retirement and return to his craft.

Louise Farrenc was known as a 19th century French piano virtuoso before pivotal, mid-century works established her credentials as a serious composer. Clarinetist Franklin Cohen, cellist Oliver Herbert, and pianist Adam Golka made a fine case for her melodious Clarinet Trio in E-flat (1856) on Saturday.

The premiere of the Trio was given in 1857 by Farrenc’s piano student Sophie Pierson and the Paris Conservatory’s virtuoso clarinetist Adolphe Leroy, but the cellist’s name is lost to history. Perhaps that reflects the tertiary role of the cello part, which sometimes trades melodic gestures with the other players, but often just provides a basso continuo-like underpinning. Nonetheless, Herbert made it sound vital and important, while Cohen and Golka fulfilled their more virtuosic roles with aplomb. 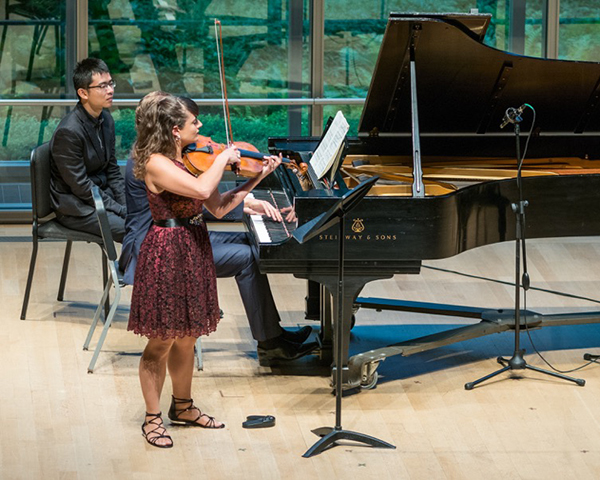 As a performing musician, Paul Hindemith was mostly known as a violist, an instrument he took up seriously around the time he wrote his Op. 11, No. 4 Sonata in 1919. If you were hearing this late-Romantic, expressionist piece anonymously for the first time, you’d be hard-put to associate it with the composer, who took up a leaner, “neo-classical” style from the 1920s onward. Milena Pajaro-van de Stadt joined Adam Golka, who was having a busy evening, in an intensely dramatic reading of the piece, which begins with a fantasia and advances to two sets of variations. 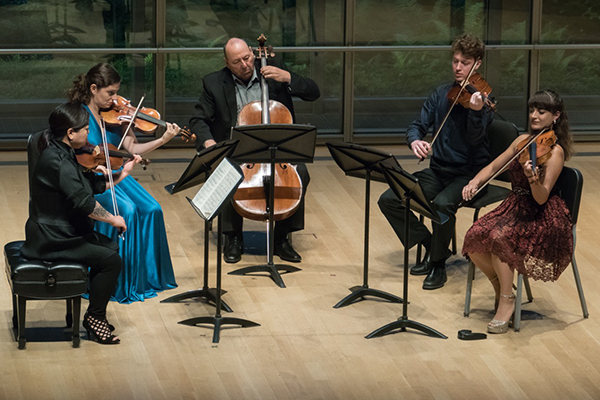 Pajaro-van de Stadt returned to the stage with violinists Yura Lee and Diana Cohen, violist Tanner Menees, and cellist Peter Wiley, to end the evening with Brahms’ String Quintet No. 2 in G, the last work the composer produced before hearing clarinetist Richard Mühlfeld inspired him to renounce his retirement plans. In spite of its sunny demeanor, Brahms wrote the piece during a dreary, rainy summer getaway to Bad Ischl, a scenario all too familiar to the Cleveland audience on Saturday.

Wiley’s vibrant cello line parted the curtains of tremolos at the beginning, and, throughout, the violins and violas traded delicious melodic gestures in pairs. References to Viennese waltzes and Hungarian dances hinted at Brahms’ sources of inspiration, and the energetic coda of the rondo finale brought the evening to a powerful conclusion. We have Mühlfeld to thank that this composer’s own turning point took him back to the drawing board for a succession of late, magisterial chamber works.

The cimbalom was the feature of the show, an instrument capable of taking on many personas. Its performer, Chester Englander, has shaped his career around the instrument, and has inspired composers to write more repertoire for it, some of which was presented on the program. END_OF_DOCUMENT_TOKEN_TO_BE_REPLACED

You wouldn’t expect that acoustic from a glance at the nave, which is wide and long, but not especially lofty. But when I guest conducted a local amateur choir and professional orchestra in Beethoven’s Mass in C there a few years back, during the first rehearsal we released the final chord of the “Gloria” and listened in astonishment for the next several seconds. The sound continued to roll down the space like the big wave that surfers dream about. END_OF_DOCUMENT_TOKEN_TO_BE_REPLACED