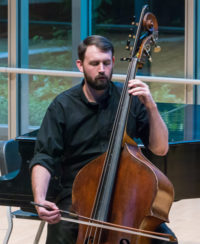 ChamberFest’s Tuesday, June 19 concert, “A Free for All,” will take place in the Crawford Rotunda at The Cleveland History Center, which houses the restored Euclid Beach Park Grand Carousel. Bassist Nathan Farrington says it will feature “a spectrum of pieces,” offering everyone at least one thing they can “dip their toes into.”

The unconventional program will include music by virtuoso fiddler and composer Mark O’Connor, a diverse set of old folk songs played by Farrington and clarinetist Franklin Cohen, Dvořák’s folk-inspired Songs My Mother Taught Me with soprano Amanda Powell. In a phone conversation, Farrington said he is most looking forward to playing one of the lesser known pieces on the program: Krzysztof Penderecki’s Duo Concertante for violin and bass, written in 2010 and inspired by the composer’s long-term friendship with violinist Anne-Sophie Mutter.

“It’s kind of out there — it’s odd music, but there’s something in the rhythm and tonality of it that’s easy for the audience to connect to.” This will be the bassist’s first time performing the Penderecki, and he sometimes feels that “this kind of piece can be hard to unpack as you’re learning it.” Ultimately, though, Farrington says that this particular work, short as it is at five minutes, has “opened up a new world” for him.

The concept of audience connection seems to be a theme for Farrington. When asked about what makes this concert unique, he said it was its potential for “catching people in a more public, transient space and offering a huge variety of music for them to latch onto.”

This will be the Curtis grad’s fourth time at ChamberFest, and he has nothing but positive feelings for it. “I think it’s one of the most innovative chamber festivals.” About festival directors Diana and Franklin Cohen, Farrington says they are “masterful at bringing the right people together and using them in ways that show them off completely. I’m always thrilled to make time for it.”

END_OF_DOCUMENT_TOKEN_TO_BE_REPLACED

Supported by engagingly, yet simple staging by Cara Consilvio, a well-prepared cast of singers told the archetypal story of Cinderella with charm and flair. Framing the production was  a sparse but colorful set and wonderful lighting by Dave Brooks. END_OF_DOCUMENT_TOKEN_TO_BE_REPLACED