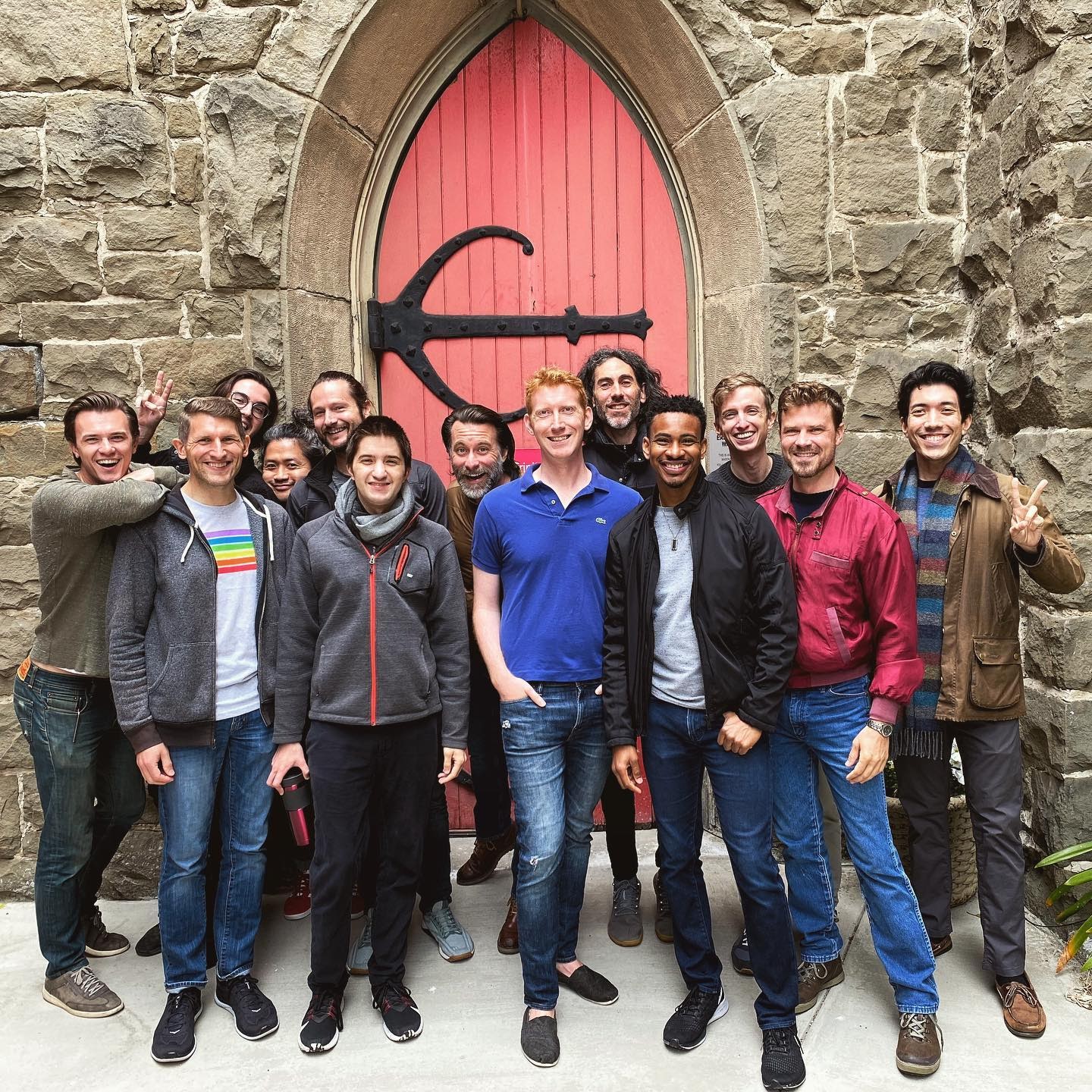 When Chanticleer sings a concert on the Tuesday Musical series at E.J. Thomas Hall in Akron on July 27, it won’t just be business as usual for the twelve male singers of San Francisco’s “orchestra of voices.”

The ensemble, which normally spends much of the year on the road, has been becalmed by the pandemic for more than a year. Akron will be the next-to-last stop on its current, eight-concert tour, the first since the shutdown.

“We’ve had to reinvent everything for each venue,” Music Director Tim Keeler said in a telephone call from Chicago. “We’re grateful to each presenter for helping us figure everything out. There’s no rulebook for how to sing choral music at the end of a pandemic.”

There’s also no set of instructions about how to keep your vocal ensemble busy and engaged during a pandemic. Keeler, who sang countertenor in Chanticleer during the 2017-2018 season, started as music director a year ago August, just in time to have to address that problem head on. (Read Keeler’s bio here.)

“It seemed that plans changed every two weeks, but I’m proud of how we’ve been able to continue to make music and to interact with people. Singing was not allowed in San Francisco in any form for most of the time I’ve been with the group, so we’ve had to figure out other locations to rehearse and perform.”

In spite of the public health restrictions, Keeler said that Chanticleer has recorded and released three separate digital concerts — one in the fall, another at Christmas, and a third a few weeks ago.

“We’ve also done a lot of educational stuff, too. One of the nice things about the past year — the silver lining if there is one — is that Zoom has allowed us to get to people and places we wouldn’t have been able to otherwise with our busy touring schedule. We’ve done a ton of educational events, interviews, and chats with students across the country.”

Happily, touring has become second nature for Chanticleer. “The guys are so familiar with the touring lifestyle that once we got to the airport it was, OK, we remember how to do this. But nothing is 100% back to normal. Everywhere we go, every state has their own guidelines, so there are a lot more steps to think about along the way on top of the usual, including getting delayed and missing flights,” Keeler said.

“In fact, we’re supposed to be in Rhode Island about now, but yesterday’s storms got us a little sidetracked,” he added. “We didn’t expect everything to be perfect right out of the gate, but I’ll tell you this: it’s a great relief to be finally performing for a live audience. We had our first tour performance in Minnesota two nights ago, and we suddenly remembered why we were doing this. It all came rushing back, and that was very exciting.” 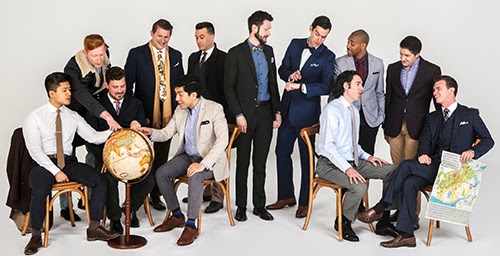 Tim Keeler’s role in Chanticleer is a bit different from that of other vocal ensemble directors. Like the stage director for a touring theatrical production, his direct involvement with the product ends when the show hits the road.

“My title is Music Director, but I like to say maybe it should be more like Music Facilitator. I pick a lot of the rep after consulting with the guys. I’ll bring ideas to them and say, what shall we do next season. We bat those around and come up with programs. I end up running rehearsals, but Chanticleer is twelve outrageously talented musicians, so they all have great things to say, and I consider it my job to hone all that knowledge into a final product.

“But it’s actually a little scary,” he added. “Before our first tour concert the other night I said, ‘OK, see you at the end’ and took a seat at the back of the house. Having been on the road with all of these guys, and known them for a long time, I trust them completely. I’m as Type A as many directors get, but it’s really quite a thrill just to watch them do their thing onstage.” 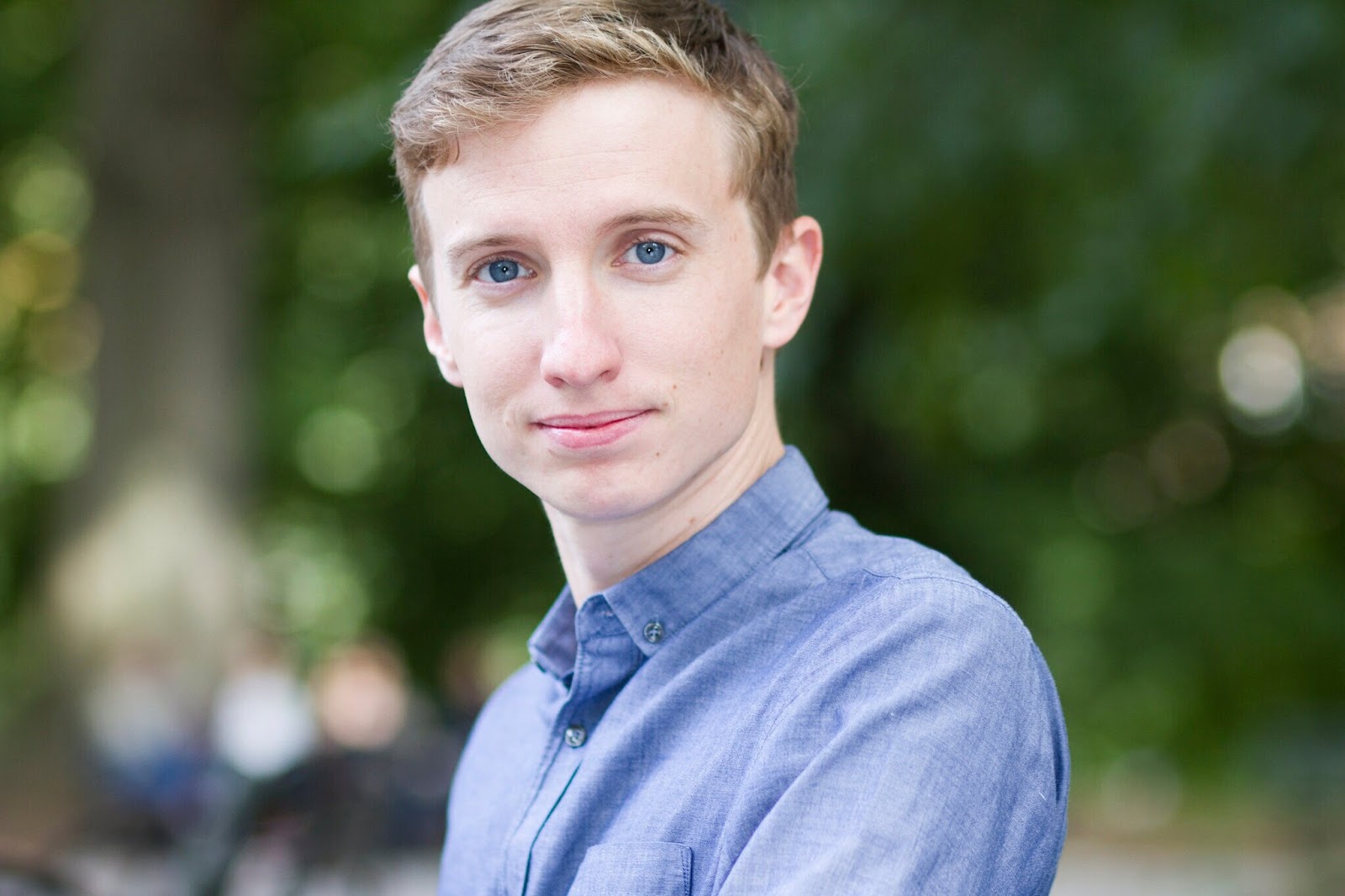 Chanticleer’s Akron concert is titled “Awakenings.” How did Keeler and his colleagues put this end-of-pandemic program together? “We were thinking about what would be appropriate for the moment. Like a lot of people, I found myself in this dreamy, sleepy world last year, and now suddenly we’re awake again and coming back to life. That’s exactly the mood that I wanted to capture in this program.”

Keeler decided to begin with a commissioned piece by Chicago-based composer Ayanna Woods which sets an ‘erasure poem.’ “She took an existing text from an L.A. Times editorial in March of 2020 about how all theaters and performance venues should close now, and picked and rearranged the words to give the text a new meaning,” Keeler said. “It starts with a sort of pointillistic soundscape, but at the end, the words ‘come back to life’ are set in a bright D Major that lasts almost a whole page. That creates the mood of the whole program for me, and I hope it does for the audience too.”

The rest of the first half of the evening rings changes on the theme of celebration, beginning with a set of pieces by Monteverdi, James MacMillan, and two Renaissance composers.

“Alexander Agricola’s Regina coeli has been in the Chanticleer repertory for a long time. For this program, I pair it with a setting of the same text by Vicente Luitano, a Portugese composer of African descent whose dates coincide with Palestrina’s,” Keeler said. In between comes Augusta Read Thomas’s The Rewaking, “an intricate and unique piece she wrote for the Cornell Glee Club.”

Introducing a set of Hungarian pieces by Kodály, Bartók, and Lajos Bardós, Keeler said, “I love Chanticleer’s ability to sing every style of vocal music you can think of,” adding that these three works are for low voices (TTBB) rather than for the wider range that the ensemble’s six countertenors, three tenors. and three basses allow it to cover.

Keeler ends the first hall of the program with one of his COVID year discoveries. “I think my biggest job as music director is scouring for scores, and I had a lot of time to do that over the past year and a half.” That led him to discover a 1953 work by Ulysses Kay that sets a text by Ralph Waldo Emerson about finding beauty where you least expect it. “It’s high art in my opinion,” he said.

After a ten minute hydration pause, Chanticleer will end with an intriguing mixture of vocal jazz, a Renaissance motet, and a set of songs by Augusta Read Thomas, Clement Jannequin, and Steven Sametz involving birds. Keeler said that William Byrd’s Laudibus in sanctis puts across the same joyful affect as the vocal jazz. If planting that piece between jazz and birds might seem odd, Keeler confessed that “being music director is great because I get to pick pieces I like.”

Tickets for the Chanticleer performance on July 27 are available online.

END_OF_DOCUMENT_TOKEN_TO_BE_REPLACED

What was that strange din coming over the live feed from Ludwig Recital Hall on Friday evening, July 23, as the Miami String Quartet filed onstage to play the third faculty recital of the Kent Blossom Music Festival? Accustomed as we were during the pandemic ban on live audiences to hearing the sound of no hands clapping, it was both startling and thrilling to witness a large crowd putting their hands together to welcome one of the Festival’s perennial favorites back for an in-person performance. END_OF_DOCUMENT_TOKEN_TO_BE_REPLACED

Practical reasons aside, there aren’t many ensembles who can put together an all-Mozart evening as elegantly as The Cleveland Orchestra. END_OF_DOCUMENT_TOKEN_TO_BE_REPLACED