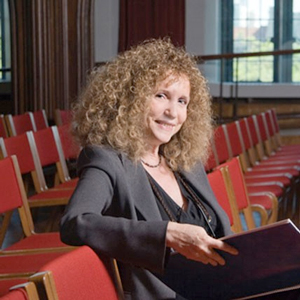 From the time she was eight years old, Shulamit Ran aspired to be one thing: a composer. In an interview with the Chicago Reader the Israeli-born Pulitzer Prize-Winner recalled that she began to write melodies at the encouragement of her piano teacher.

“My teacher sent some of those melodies to a local radio station,” she says,  “and they ended up being performed on the radio by a children’s choir. It is a vivid recollection — I was eight at the time and away at summer camp; there we all were, the kids and myself, all sitting around a large radio listening to my music coming out of it. That was a revelation for me, because it was the first time that I had the sense my music could live outside of me. What I had made up now had its own, separate existence. It gave me such pleasure and it was a very special feeling, and I knew that I wanted to keep doing this. Although all kinds of other things have always interested me, I’ve never wanted to do anything else but compose ever since.”

Next week, the Cleveland Institute of Music will play host to the celebrated composer during a three-day residency. On Tuesday, January 26 at 4:30 pm, Ran will discuss her music in Studio 113. The following evening at 8:00 pm in Kulas Hall, guest conductor Steven Smith will lead the Cleveland Institute of Music Orchestra in a concert that will include Ran’s Legends and Violin Concerto featuring Laurie Smukler as soloist. The program will also include Charles Ives’ The Unanswered Question. Both events are free and open to the public.

By the time Ran was nine years old, she was studying composition and piano with noted Israeli musicians and composers, including Alexander Boskovich and Paul Ben-Haim. At age fourteen, she moved to the United States to continue her studies as the recipient of scholarships from the Mannes College of Music and the America Israel Cultural Foundation. In 1973, at the age of 26, she joined the faculty of the University of Chicago, where in the spring of 2015 she retired as the Andrew MacLeish Distinguished Service Professor in the Department of Music.

Ran may be leaving academia full time, but her schedule is as busy as ever. “I’ve done that for quite a few years and I loved it,” the very friendly Shulamit Ran said during a telephone conversation with ClevelandClassical.com. “The University of Chicago is extraordinary, and I will continue to love my colleagues, my students, and the culture of the place. It’s not a matter of leaving academe, but rather saying OK, I’m now going to reshuffle priorities and have a little more flexibility to do that which has always been the core: composing. But I look at my schedule and I say, ‘Where is my retirement? I’m so busy.’ There’s no such thing as retirement for creative artists, for the most part, because what we do is at the core of our existence. It gives meaning to our lives — but that’s OK because that’s the way it was intended to be, so it’s all good.”

Ran said the opportunity to join the faculty at the University of Chicago happened by chance. “At the time, I was living in New York. This was back in the time of LPs — there were no CDs or even cassette tapes. Around 1973, a composition of mine from back in 1969 came out on the other side of a recording of a work by George Rochberg. I don’t know whether it was his publisher or the record company — I don’t know who it was — but someone sent that LP to Ralph Shapey, who was on the faculty at the University of Chicago and was director of the Contemporary Chamber Players. But in any case, he flipped the LP over and listened to my work. By chance, there was a search going on at the department for a composer at the junior level, and Ralph apparently went to the department chair’s office, threw the LP on his table, and said, ‘That’s our composer.’”

In addition to serving on the faculty of a distinguished university, Ran said that having a new music ensemble at her disposal was one of the great draws of the position. “I had heard about the Contemporary Chamber Players (now known as Contempo) from various people, and I was aware of their reputation in the United States and in Europe. Although I had never been in Chicago and I did not know a whole lot about the University, I knew that CCP — as we called it back then — was quite special and very renowned. So it did play into my decision to come for the interview as well as the decision to accept the appointment. There’s no doubt in my mind that the presence of CCP was a major engine behind what has become a vibrant new music scene in Chicago. Now, it’s really a thriving place in terms of new music.”

During next Wednesday’s CIM Orchestra concert, the performance of Ran’s Legends will be dedicated to the late John Duffy, the founder of Meet the Composer, a program that was important to her appointment as composer in residence at the Chicago Symphony, who commissioned the work along with the University of Chicago. “The Symphony joined Meet the Composer at the beginning, and when Henry Fogel came into his position with the Orchestra, he brought in John Corigliano as composer in residence. Later he brought me in. That made a big difference in the whole new music scene in the city. So it’s been an evolution over time — although for a while, if you wanted to hear new music played at the highest level, there was only one place. That was the University of Chicago and the Contemporary Chamber Players.” 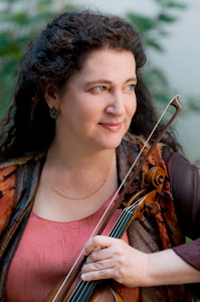 Wednesday’s orchestra program will feature Laurie Smukler, Julliard faculty member and one of the founders of the Mendelssohn String Quartet, in Ran’s Violin Concerto. Ran’s recalled first meeting the violinist in the 1980s when the Quartet approached her and commissioned her first string quartet. “We became close, but lost contact over the years just because of life circumstances like raising children and those things that make one triply busy. But we got back together in recent years when Laurie commissioned a piece from me for violin and cello which she premiered with Joel Krosnick.”

Smukler then decided that she wanted to learn Ran’s violin concerto which had been commissioned, premiered, and recorded by Ittai Shapira, who retained the exclusive rights to its performances for five years. But Smukler really wanted to learn it and so she did, eventually performing it with the Mannes Orchestra at Alice Tully Hall in February, 2014.

“Her performance of it was wonderful,” Ran said. “There’s no greater joy for a composer than to have a piece done by different performers — and they are both superb. It’s a very demanding concerto and wow, did she get inside it. I thought it would be terrific if Laurie could to come to Cleveland and play the concerto. Keith Fitch waved the magic wand and made it happen, and I’m delighted about it.”

Smukler’s appearance is especially appropriate because the violinist grew up in Cleveland and studied with Margaret Randall at the CIM Preparatory Department, making her debut with The Cleveland Orchestra at the age of 14.

While at CIM, Laurie Smukler will teach a master class on Tuesday, January 26 at 10:00 am. Shulamit Ran will also coach two of her works — one for solo flute and one for flute and piano — with CIM students. “I always love to do that sort of thing,” Ran said.

Jackson began the program with a recitation of Langston Hughes’ poem “Helen Keller” — the first of five poems by Hughes that served as interludes between each piece on the first half. END_OF_DOCUMENT_TOKEN_TO_BE_REPLACED

Pianos with pins and tape on strings, a bass drum and tam tam, crotales, Almglocken, and vibes. Microphones were hooked up all around the instruments. The feed was sent to speakers around the room. Lighting designer Nicholas Houfek hung incandescent globes over the arrangement of instruments from thin black wires stretching across the beams. END_OF_DOCUMENT_TOKEN_TO_BE_REPLACED

From the podium, Elim Chan set an ambitious tone for the evening. The rising star conductor, here in her Cleveland Orchestra debut, has a commanding style, and every twist and turn in Saturday’s performance tracked closely with her baton. END_OF_DOCUMENT_TOKEN_TO_BE_REPLACED