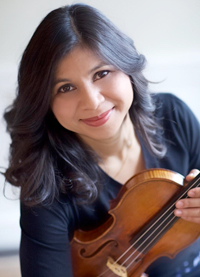 If Friday evening’s CityMusic Cleveland concert ended up being a bit topsy-turvy, it was for a good reason. The order of events in the printed program began with Edvard Grieg’s first Peer Gynt suite and ended with Arvo Pärt’s Symphony No. 4, with Carl Nielsen’s violin concerto in the middle. In actuality, the first and last pieces were flipped, making for a much more effective sequence.

Guest conductor Joaquin Valdepeñas, long-time principal clarinet of the Toronto Symphony, stepped in for CityMusic’s current four-concert set in place of music director Avner Dorman, no reason given. Conducting bare-handed, he led a sensitive reading of Pärt’s mystical, meditative symphony, subtitled “Los Angeles” after a prayer to a guardian angel the composer was using in a choral work, an after the name of the orchestra that commissioned it.

Scored for strings, percussion and harp, the work probably achieves its greatest impact with a string section of symphonic dimensions, but even with smaller string forces, it drew the listener into Pärt’s special musical world and held one’s attention for most of its 30-minute duration. It wouldn’t have made a good concert closer.

Beginning ritualistically with the tinkling of bells, the three-movement symphony unfolds gradually with meaningful pauses in the first movement (Con Sublimata). A different, more anguished feeling permeates the second movement (Affannoso), perhaps a reflection of Pärt’s dedication of the symphony to “all those imprisoned without rights in Russia.” After an inexorable march, the third movement (Deciso) ends in a rising figure and whispers for high strings, harp and percussion.

At the center of Friday evening’s program, violin soloist Adele Anthony was in full control of Nielsen’s concerto, playing with strength, confidence and easy virtuosity. Nielsen noted that his concerto “must have substance and be popular and showy without being superficial,” and Anthony hewed closely to those specifications, contributing two hefty and athletic cadenzas as well as drawing out Nielsen’s lyrical lines with tender sensitivity.

Valdepeñas seemed somewhat ill-at-ease during the Nielsen, perhaps because he now had to deal with a wind section elevated on the chancel platform, which restricted his movements to shoulder-high and above. His gestures became loopy and undefined, and the orchestra’s ensemble sometimes grew ragged as a result.

The four selections from his incidental music to Ibsen’s play that Grieg extracted to make up his Peer Gynt Suite No. 1 make a tight and effective grouping. Valdepeñas and CityMusic put them across stylishly, ending with a frenzied accelerando in honor of the Mountain King.

This was the second of four performances of this program around the region. While it’s difficult to adjust to a different venue every day, there are a few details of concert production that could be tightened up for any occasion. Friday’s performance began several minutes late and was further delayed by remarks from the host pastor and CityMusic’s president — who gave his own take on the Pärt work and had the percussion section demonstrate common instruments that probably most people would recognize. The departure from the printed program left the audience guessing about when intermission was to start. And though the cookies provided by the church were tasty, the interval went on too long.

On the plus side, Donald Rosenberg’s program notes were chatty and informative, and wore their erudition lightly. He should be invited to do this more often.

The first such video, capturing the October 20 performance of Resilience at First Baptist Church in Shaker Heights, delivered handsomely on that promise. Erica Brenner’s sensitive videography and audio mixing preserved brilliant performances of music that illuminated two troubled periods in history: the plague of London in 1665, and the outbreaks of cholera and dysentery that dampened but failed to defeat the human spirit at the end of the American Civil War two centuries later. END_OF_DOCUMENT_TOKEN_TO_BE_REPLACED

The Diamond Brass Quintet opened Rocky River Chamber Music Society’s new season on Monday, October 12 with nobody in the pews at West Shore Unitarian Universalist Church. Like most performances these days, the concert was only attendable online. The players were widely-spaced on the stage, plexiglass shields were in place to cut down on aerosol transmissions, and the quintet took two intervals to go outdoors and let the air in the sanctuary refresh itself. (Rehearsals had been held outside as well.) END_OF_DOCUMENT_TOKEN_TO_BE_REPLACED

“Bewitched,” the first subscription concert of this season by Les Délices, can be summed up in one word: sensational. In her introductory remarks, director Debra Nagy talked about the “Embracing Change” theme of the season and completely rethinking the concert experience for streaming. The detailed planning was in evidence throughout the program. “Bewitched” was not just a concert; it was a carefully planned musical film, with elements of drama and music appreciation, all in support of the inspired program choices featuring Medea and Circe, two famous witches (or sorceresses, if you prefer) of classical antiquity. END_OF_DOCUMENT_TOKEN_TO_BE_REPLACED

END_OF_DOCUMENT_TOKEN_TO_BE_REPLACED

Though it had amassed a vast trove of audio over the decades, The Cleveland Orchestra has come late to the game in the video department. Even so, the organization wasn’t about to rush to produce the equivalent of home movies to keep its patrons engaged while live events were on hold. END_OF_DOCUMENT_TOKEN_TO_BE_REPLACED

END_OF_DOCUMENT_TOKEN_TO_BE_REPLACED

Although it wasn’t the original plan to go online last weekend for the final round of the James Stroud Classical Guitar Competition, moving to a digital format suited the event well. Young performers Aytahn Benavi, Patricia Hernandez, Ian Tubbs, and Eric Wang played in the intimate setting of their own homes, giving everyone who tuned in a front row seat. END_OF_DOCUMENT_TOKEN_TO_BE_REPLACED