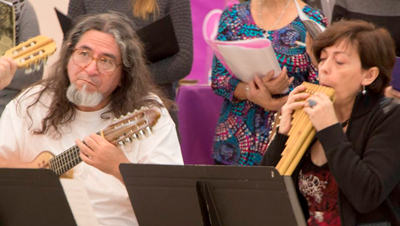 CityMusic Cleveland continued to move into new territory with the first of its five “Holiday Concerts” on Wednesday evening, December 3. Led by Peter Bennett and collaborating with members of the choirs of Sagrada Familia Parish on their home turf on Cleveland’s West Side, CityMusic ventured into Latino repertoire with a performance of Ariel Ramirez’s forkloric Missa Criolla. The curtain-raiser was a Sinfonia by Antonio Sarrier, a Spanish-born composer and trumpeter who emigrated to Mexico in the mid-eighteenth century. In between, Laura Koepke was the featured soloist in Mozart’s Bassoon Concerto.

The bright acoustics of Sagrada Familia’s wrap-around worship space made Sarrier’s three-movement Sinfonia in D sound especially jolly. Barely nine minutes long, the piece is written in an accessible and unmistakably early classical style (think Haydn or Mozart when they still had their training wheels on). Fugal elements brought a certain gravitas to the finale, only to be dispelled by some deliciously raucous horn licks toward the end. Bennett led a clean, well-articulated reading that brought out the piece’s many attractive details.

Those acoustics proved tricky for the bassoon concerto. Scored for oboes, horns and strings, the orchestration takes pains to carve out a niche where the bassoon can be heard in its best register — at least in a room where the winds have a stab at being able to play softly. While Koepke’s lovely, woody tone sometimes got a bit lost in the orchestral texture, her performance was confident and assured. She sang out clearly in the lightly-scored Andante, and her figuration in the concluding Rondo (in the guise of a minuet) was delightful. Bennett and CityMusic were hand in glove with Koepke throughout.

Ariel Ramirez’s “Creole Mass” owes its inspiration to the 1963 Second Vatican Council, which allowed the centuries-old Latin text of the Mass to be replaced with vernacular languages. In Argentina, that meant Castilian Spanish, and Ramirez took the opportunity to craft a liturgical setting that made use of various folk rhythms and native instruments like pan flutes, the traditional five-string guitar and indigenous percussion.

For this performance, CityMusic combined eleven Sagrada Familia singers with eight trained voices from Case, Trinity Cathedral and CSU, pulled in soloists from Oberlin (tenor Joshua Blue and baritone Michael Floriano, both students of Salvatore Champagne) and added its own percussionist, Luke Rinderknecht, and Case keyboardist Paul Abdullah to the ensemble. The orchestra itself had completed its task for the evening at intermission, to be replaced by a fine folkloric ensemble made up of Miguel Colón, guiro, Silverio Lebrón Vargas, guitar, Raquel Paradisio, pan flutes, and Francisco Lopez, charango and bombo.

The performance of the Mass was infectiously rhythmic, tuneful and fun. Like Mozart did in his “Short Masses,” Ramirez moved things right along while still allowing time for reflective, recitative-like passages and moments of near-operatic lyricism, here featuring the commanding but well-blended voices of Blue and Floriano. The chorus, prepared by Malina Rauschenfels and José Gotera, sang their featured parts with healthy enthusiasm and backed up the soloists expressively in quieter sections. The pan flutes added their special Andean flavor at several points.

The program will be repeated four times through Sunday: on Thursday, December 4 at 7:30 at Communion of Saints Parish in Cleveland Heights, on Friday, December 5 at 7:30 at St. Noel Church in Willoughby Hills, on Saturday, December 6 at 7:30 at the Shrine Church of St. Stanislaus, Cleveland, and on Sunday, December 7 at 4:30 at Lakewood Congregational Church. All performances are free.

Jackson began the program with a recitation of Langston Hughes’ poem “Helen Keller” — the first of five poems by Hughes that served as interludes between each piece on the first half. END_OF_DOCUMENT_TOKEN_TO_BE_REPLACED

Pianos with pins and tape on strings, a bass drum and tam tam, crotales, Almglocken, and vibes. Microphones were hooked up all around the instruments. The feed was sent to speakers around the room. Lighting designer Nicholas Houfek hung incandescent globes over the arrangement of instruments from thin black wires stretching across the beams. END_OF_DOCUMENT_TOKEN_TO_BE_REPLACED

From the podium, Elim Chan set an ambitious tone for the evening. The rising star conductor, here in her Cleveland Orchestra debut, has a commanding style, and every twist and turn in Saturday’s performance tracked closely with her baton. END_OF_DOCUMENT_TOKEN_TO_BE_REPLACED