When David Robert Jones, a.k.a. David Bowie, passed away in January of 2016, the English singer, songwriter, actor, and popular-culture icon left the world with a prodigious artistic canon. With a career dating back to 1962, Bowie was constantly reinventing himself. That raises the question — what and who were his artistic inspirations?

In the first of five concerts, beginning on Wednesday, March 15 at 7:30 at St. Jerome Church in Cleveland, audiences will be able to discover some answers to that question when Avner Dorman leads CityMusic Cleveland in “What’s on David Bowie’s Playlist?” The program will feature Anthony Fiumara’s Bowie XL, an instrumental suite of seven Bowie songs with narration by actress Anjanette Hall about the Rock and Roll Hall of Fame inductee’s life and career. The five free concerts run through Sunday. Check our Concert Listings page for times and locations.

The program will also include classical works by composers who inspired Bowie. Local writer and rock historian David Budin, who served as an advisor to the program, said that artist’s 2002 album Heathen had been inspired by the Four Last Songs of Richard Strauss, specifically “Im Abendrot” (At Sunset). “I listened to the Strauss, and then the album,” Budin said. “I ended up choosing the song ‘Sunday’ for the concert because it’s both musically and lyrically related to the Strauss.”

In addition to Romantic music, Bowie was also a fan of minimalism. “He was inspired by John Adams and Philip Glass — there were works by Glass, Adams, and Steve Reich on his iPod — though I cannot find a quote that offers any specifics. But on the other side of the coin, Glass was inspired by Bowie, and wrote two major works based on the albums Low and Heroes, both from 1977.” The program includes Adams’ Short Ride in a Fast Machine and the first and fourth movements from Glass’s Heroes Symphony.

The evening will conclude with a suite of four of Bowie’s classic songs — Time, Ziggy Stardust, Moonage Daydream, and Lazarus — performed by Richard Kline of the Bowie tribute band Diamond Dogs. How did Budin narrow down the list to four? “I asked Richard what his favorites were, and he gave us a list of about twelve songs in order of preference. Avner Dorman listened to them and agreed with Richard’s top four choices.” 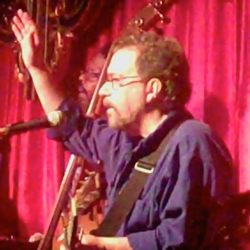 Budin (left) said that the opportunity to work on the project helped him to more fully understand and appreciate David Bowie and his music. “He started out in a folk trio, and his older brother turned him on to modern jazz. He was also interested in show tunes — Anthony Newley was a big influence. He studied all kinds of music in the hopes that it would help him in his career.”

What is it about Bowie that made him such a popular artist for so many years? “It wasn’t just his music that caught people, it was the whole package — the way that he looked, dressed, and acted,” Budin said. “He was also the first major artist to talk about homosexuality. Another reason is that he was always reinventing himself — as soon as Ziggy Stardust was gone he became somebody else. He had a theater background so he understood makeup and costumes, props and sets — he understood how to create a show. People don’t realize that he was in 40 movies and was on Broadway in The Elephant Man. And at the end of his life he wrote a show that played in London and off-Broadway. As an artist, he was determined and interested in everything.”

A refreshing reminder of both the unique powers and deeper kinships of music and poetry, the performance of Collage on October 14 filled the Auditorium of Pilgrim Church with sounds both tranquil and mighty. In an era when rhyming rhythmic recitation over instrumental sound hardly constitutes a new idea — hip-hop, after all, is the ascendant popular genre of the present century — Okantah and the Cavani have engineered something unique, brilliant, and vital. END_OF_DOCUMENT_TOKEN_TO_BE_REPLACED

Although the Museum had just opened again earlier in the week, in-person concerts were not on the agenda. Instead, Classical Piano Series director Emanuela Friscioni and her husband Antonio Pompa-Baldi invited a virtual audience into their handsome, sun-dappled music room for an intimate, exquisitely-played program of four-hand piano works by Schubert and Debussy topped off with the premiere of a new work by their fellow Italian, Luca Moscardi. END_OF_DOCUMENT_TOKEN_TO_BE_REPLACED

END_OF_DOCUMENT_TOKEN_TO_BE_REPLACED

Northeast Ohio’s Les Délices has long been that rarest of beasts: a world-class organization so proud of its region (ours) and repertoire (distinct niches in pre-1800 music) that it never tries to be everything to everyone, paradoxically making a strong case for a broad, curious international following. In the December episode of its SalonEra series, the ensemble embraces its strengths and community to marvelous effect. END_OF_DOCUMENT_TOKEN_TO_BE_REPLACED