The peripatetic CityMusic Cleveland Chamber Orchestra resumed its roving this past week from Wednesday, December 12 through Sunday, December 16 in a sprightly program led by principal guest conductor Stefan Willich with Cleveland Orchestra principal oboe Frank Rosenwein as soloist. I caught the second evening on Thursday, December 13 at Temple Tifereth-Israel in Beachwood.

The centerpiece of the concert was a luscious late work of Richard Strauss, his Oboe Concerto (1945). The flowering of Strauss’s imagination near the end of his life is one of music history’s unexpected joys. An early exponent of wonderfully outrageous modernism — just think of Salome kissing the severed head of Jochanaan — Strauss was bypassed by the avant-garde and settled into a career with both wonderful hits and ridiculous misfires. But from his final opera Capriccio (1942) through to his Four Last Songs (1948), Strauss used his sure command of late Romantic tonality to craft music that sticks in the imagination. 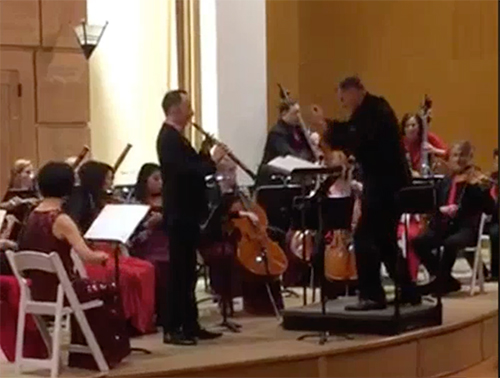 The Oboe Concerto is notoriously difficult: the soloist must spin never-ending beauty of line and tone throughout most of the piece in addition to handling its elaborate figuration, and Rosenwein was clearly in top form. His tone was both diaphanous and resonant, his meticulous phrasing displayed the beautiful colors he has at his command, and his fingers flowed effortlessly from the opening page to the fleet-footed finale.

Willich and CityMusic supported Rosenwein with fine playing full of Strauss’s characteristic bubbling and churning. Unfortunately, Temple Tifereth-Israel is acoustically dry, which gave this lushest of music an uncharacteristic brusqueness.

The concert opened with Rossini’s fun Overture to L’Italiana in Algeri. Principal oboe Mary Kausek brought a wonderfully lithe touch to her solo in the slow introduction. Willich helpfully outlined the overture’s form with slight slowdowns at the end of each section, but otherwise let Rossini’s driving rhythms — especially in the bouncing, famous crescendi — take the lead in a delightful reading.

The rest of the program was devoted to the first of Mozart’s celebrated final three symphonies: No. 39 in E-flat. Willich’s take on this well-known work was generally capable. The most successful movement was the minuet, where the conductor’s clear multi-bar phrasing gave the music a buoyancy and lightness that are often missing from performances of Mozart’s dances. On the other hand, his tempo in the finale made this light and playful music sound rigid. Out-of-tune octaves between the cellos and double basses marred the first movement, while the beautiful slow movement suffered from a lack of cohesive blend in the first violins. If one chooses to measure an ensemble by their Mozart, this was undistinguished.