The program paired Romantic-era quintets by Camille Saint-Saëns and Luise Adolpha Le Beau, who “for all her talent, ambition and accomplishment…was limited by her sex in achieving complete success in her chosen field,” as Richard Rodda writes in the program notes — which also include an excellent survey of the history of women composers.

First up from the physically distanced, masked Pantheon Ensemble was Le Beau’s 20-minute String Quintet in c. That rarely performed work brings a number of virtues to the table: passionate and rhythmically diverse writing à la Brahms, with melodies that feel personal and unaffected rather than grandiose. A particular highlight was the bold and concise “Mazurka,” performed here with verve.

Le Beau gives the lion’s share of the melodies to the first violin and cello, and Masha Andreini and Nataliya Pshenychna responded with rich solo playing. Violinist Mari Sato and violist Yaël Semanaud created a supreme blend with their inner voices — one only wished to hear their beautiful playing come to the fore more often. And in this version of the piece, with double bass rather than a second cello, Tracy Rowell provided a satisfying underpinning. The only bumps in the journey were disagreements of intonation, which were most noticeable in the beginning but improved as the concert went on. 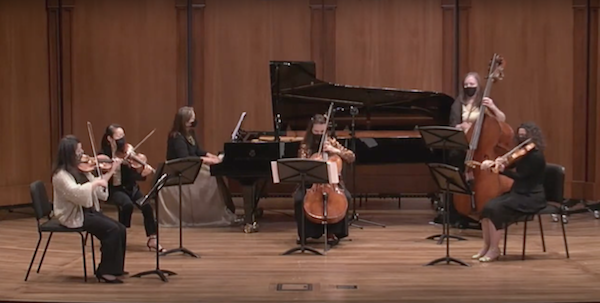 Saint-Saëns’ Piano Quintet in a brought out a sensational performance by Elizabeth DeMio, whose virtuosic technique and wonderful lightness of touch were the perfect match for the concerto-like keyboard part. The strings lent their own alluring passages and maintained a strong, confident balance. And as for the quintet as a whole, not only were their melodic exchanges smooth, but a real spirit of togetherness came across throughout. Did I say quintet? Bassist Tracy Rowell, who had remained onstage silently following the Le Beau, made the Saint-Saëns a sextet with some low-register support during the finale. Why not?

Live streams don’t often create the same feeling as in-person performances, but this one came as close as I can remember since the pandemic began. Video and audio quality were excellent, and the whole thing finished in under an hour, avoiding any screen fatigue. Most critically, the Pantheon Ensemble captured a sense of energy and abandon that is difficult to muster in front of an empty room.

Or at least an almost empty room. Rob Van Auken, the Maltz box office and marketing manager who had also emceed the evening, responded to the final chord with a cheer.

END_OF_DOCUMENT_TOKEN_TO_BE_REPLACED

Supported by engagingly, yet simple staging by Cara Consilvio, a well-prepared cast of singers told the archetypal story of Cinderella with charm and flair. Framing the production was  a sparse but colorful set and wonderful lighting by Dave Brooks. END_OF_DOCUMENT_TOKEN_TO_BE_REPLACED