It might surprise you that the answer is a cop comedy — NBC’s Brooklyn Nine-Nine, which recently finished its seventh season and has been picked up for an eighth. The show is about the fictional 99th precinct in Brooklyn, NY, and the group of oddball police officers who work there, including two with a fondness for classical music.

One of them is Detective Norm Scully (played by Joel McKinnon Miller). He’s one of the two “magnificent oafs” of the precinct — a best-friend pairing of older cops whose main interests are greasy food and comfy chairs. But going against trope, Scully also sings opera.

In Season 1 alone, we hear him deliver excerpts of La donna è mobile, Una furtiva lagrima, and O sole mio, the latter two in Episode 16. These aren’t spoof renditions — Miller has a good voice, having studied opera and theater at the University of Minnesota, Duluth.

The other fan of classical music is Raymond Holt (Andre Braugher), the respected captain of the precinct who has slowly risen up the ranks of the NYPD despite facing harassment as a black, openly gay man. He’s also known for his intense stoicism and peculiar level of blandness — his favorite breakfast is plain toast, and rather than the “grammatical abomination” whodunit, he prefers the phrase who has done this. (Braugher’s brilliant deadpan is the perfect contrast to lead actor Andy Samberg’s unfailingly silly Detective Jake Peralta, below.) 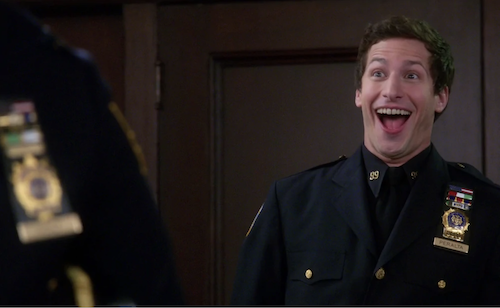 Depending on who you ask, Holt’s love of classical music either plays into his boring personality or goes against it, but it certainly reveals a more emotional side of him. Episode 16 of Season 3 involves the fictional character of John William Weichselbraun, the “world-renowned oboist” and “first chair with the New York Symphony Orchestra,” who has reported his instrument stolen. Holt makes himself the primary detective on the case, and when he has the opportunity to interview the oboist, he fawns.

“I must admit,” he says, “I’m a bit of a Weichselbrauniac. I saw you perform Bach’s Oboe Sonata in G Minor at the Brooklyn Academy of Music. I was in the front row.” Here, Weichselbraun remembers Holt: the man who was escorted out for gasping too loudly.

Episode 12 of Season 2 includes several short scenes with Telemann’s Fantasias for solo recorder playing in the background. “The recorder is generally thought of as a training instrument for children, but listen to it,” Holt tells a group of his detectives during a beach-house retreat. “In the hands of an expert like Joram Leifgrum, the passion is…” He pauses. “Breathtaking.”

The reaction? “I now hate a whole new genre of music,” Peralta later tells a colleague.

(Leifgrum seems to be a made-up name, while some references to classical music in the show are not fully researched. Others will impress insiders: in Episode 4 of Season 2, Holt repeatedly references the Dutch conductor, recorder player, and Baroque flutist Frans Brüggen.)

Peralta’s reaction is not an outlier — as a rule, the detectives roll their eyes at any mention of classical music. In that way, the writers use Holt’s interest in the genre as a way to emphasize how out of touch he is with youth culture.

That can create moments that are simultaneously really funny and, for those steeped in the world of classical music, grounding: a reminder of how small that community really is, and how that music is perceived by the vast majority of people.

You can stream all seven seasons of Brooklyn Nine-Nine on Hulu.

Over the past few years, Brian Giebler has visited Northeast Ohio in settings both orchestral and choral, and with repertoire as diverse as Stravinsky, Bach, and the local premiere of a new work. In his impressive solo recording debut a lad’s love, released on Bridge Records, the New York City-based tenor turns his focus to British songs from the first half of the 20th century — a mix of cycles and individual works — and tops off the playlist with a touch of the modern. END_OF_DOCUMENT_TOKEN_TO_BE_REPLACED

To steal a phrase from the third-century Greek philosopher Sextus Empiricus, the mills of the gods grind slowly, but they grind exceedingly fine. The same goes for Deutsche Grammophon. It’s been a dozen years since they were recorded in Hamburg in 2009, but the German company has now issued fifteen Rachmaninoff piano pieces magnificently and poetically played by Sergei Babayan. END_OF_DOCUMENT_TOKEN_TO_BE_REPLACED

END_OF_DOCUMENT_TOKEN_TO_BE_REPLACED

After considering all its options, Cleveland’s period ensemble Les Délices decided to fully embrace the idea of creating pre-recorded “shows” in the place of live, in-person performances this season. END_OF_DOCUMENT_TOKEN_TO_BE_REPLACED

END_OF_DOCUMENT_TOKEN_TO_BE_REPLACED

For those who crave coherence in a concert, consistent instrumentation can help. For those who want a sense of progression, starting with shorter or older pieces and moving toward more extended or contemporary works makes for a sound strategy. Those who value both would love the sort of program that Idaho’s Sun Valley Music Festival assembled for its recent program Strings and Mallets on Tuesday, August 4. Although produced under the Sun Valley banner, the performances were recorded remotely in several locations. END_OF_DOCUMENT_TOKEN_TO_BE_REPLACED