On the eve of St. Cecilia’s Day — but obviously blessed in advance by the patron saint of music — the Cleveland Chamber Choir sang a splendid inaugural concert at First Baptist Church in Shaker Heights. Under the direction of its founder, Scott MacPherson, the new ensemble’s performance on Saturday, November 21 set a very high standard for themselves as a professional choral ensemble, and MacPherson’s programming whetted the appetite for more imaginative concert menus to come.

With only two intensive weekends of rehearsal under their belts, the 36 singers instantly impressed the ear in Gustav Holst’s eight-voice Nunc Dimittis. Singing with fine intonation, wonderfully blended tone, and strong inner energy, the singers showed just how satisfying choral sound can be without vibrato, especially in a resonant, neo-gothic space. Sarah Osburn and Peter Hampton were featured in solo passages, and the final chord was thrilling.

Renaissance madrigals used to be fair game for choruses, until the H.I.P. movement sought to restore them to their original, one-singer-on-a-part purity. MacPherson took on two famous examples, John Wilbye’s Draw on, Sweet Night and Claudio Monteverdi’s Ecco mormorar l’onde, proving that thirty-some singers can reclaim this musical territory with great success. Supple and reactive to the texts (the former about the melancholy of encroaching darkness, the latter about the restorative freshness of dawn), the Choir sang with lean tone and engaging expression, making the Wilbye sad and touching, and the Monteverdi buoyant and flowing.

Turning to romantic partsong, MacPherson and the Choir led off with Robert Schumann’s Zigeunerleben, a short but energetic choral snapshot of a day in the life of Gypsies. Anna White, Kim Lauritsen, Kevin Foster, Paul Stewart, Julie Myers-Pruchenski, and Lee Scantlebury were featured in brief solos, and Natalie Mallis and Corey Fowler took up tambourine and triangle to add a bit of color. Karin Tooley — off to the side and some distance from the choir — provided a sparkling piano underpinning. 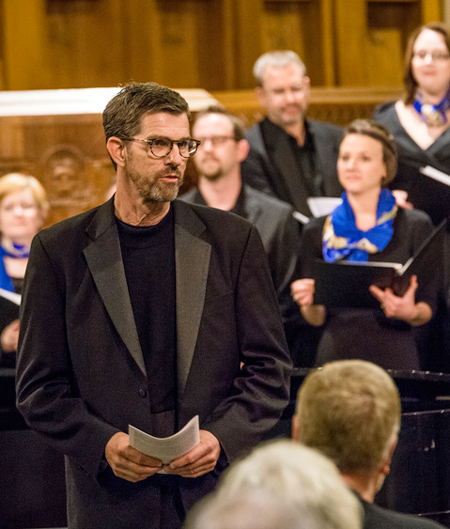 Beautiful harmonies and textures characterized two songs by Johannes Brahms: O schöne Nacht and Dem dunkeln Schoß der heil’gen Erde (the first a shining poem about night, the second a parable of the sower and his seed that turns into a meditation about death). Joseph Rheinberger’s equally gorgeous Abendlied made you wonder why this Lichtenstein composer’s music isn’t performed more frequently.

Three fascinating works composed in the last decade — two of them by Cleveland composers — followed intermission. Corey Rubin’s 2012 Euclid Avenue Songs are settings of a letter from Mark Twain that nicknamed that street “Millionaire’s Row,” an interview with Helen Keller about the famous 1913 blizzard that snowed her in at the Statler Hotel, and excerpts from a strange poem by Cleveland native Hart Crane, Euclid Avenue.

Rubin created clever, arresting choral music out of these odd, local texts. The Twain sounds robust and craggy, the Keller is haunting and atmospheric, and the Crane is full of woozy glissandos and swoony gestures, not to mention a sudden quotation from Beethoven’s Ninth Symphony (Rubin once sang with the Cleveland Orchestra Chorus, also located on Euclid Avenue). The singers met all of Rubin’s technical challenges, tuning chords seemingly out of thin air, and putting the texts across with savvy confidence right to the end of the final choral cluster on the words “Euclid Avenue.”

British composer Cecilia McDowall wrote her Aurea luce for the Liverpool Cathedral Choir in 2010. The intriguing work, ranging from the declamatory to the reflective, drew First Baptist’s organist Robert Schneider into the evening’s mix to provide a quasi-minimalist undergirding to the piece’s opening and closing sections.

Moving back to Cleveland, MacPherson and the Choir ended their program with Cleveland State University composition professor Andrew Rindfleisch’s inventive Careless Carols, a setting of a poem by Bengali writer Rabindranath Tagore. Rindfleisch (who was Corey Rubin’s mentor) deconstructs the opening words (“Sing the song…”) into a cloud of sibilants the singers tossed back and forth with vivacious energy. A harmonically complex middle section leads to a reprise of “sings” and “songs” and a tremendous final chord. 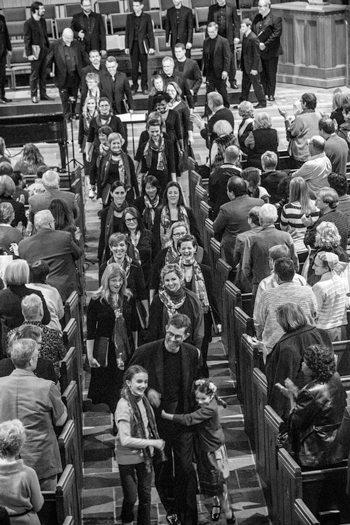 The audience called MacPherson back several times, and the conductor had an encore waiting: Linda Kachelmeier’s Rise up to Greet the Morning Dawn. A folksy setting of a hymn in a style reminiscent of shape-note singing, the piece applies new music to words from John Newton’s “Amazing Grace” and provided a fun button on an evening of superb singing. At the end, the choir filed down the center aisle to greet the audience in the entryway.