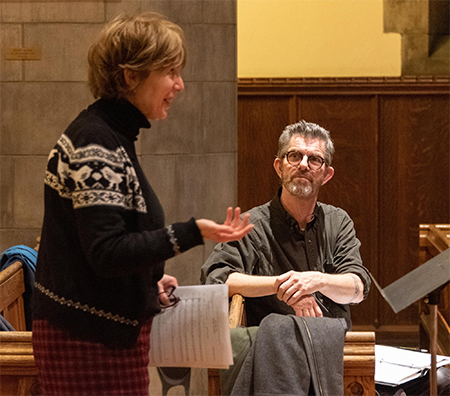 Cleveland Chamber Choir’s hosting of choruses from Kent State and Cleveland State Universities in a joint concert on February 27 in CSU’s Waetjen Auditorium might have been reminiscent of multi-choir powwows from one’s schooldays, but the quality of repertoire, the level of singing, and efficient stage management raised the event to impressive heights.

The catalyst for this particular concert was a visit by British composer Cecilia McDowall, several of whose works were programmed, including the premiere of her On the Air (Dear Vaccine), and culminating in a massed choir performance of her 2016 piece The Presence. Along the way, we also heard McDowall’s Brightest Star, De Profundis (Night Raid), Regina coeli, and When Time is Broke: Three Shakespeare Songs.

In a pre-concert chat with Oberlin musicology professor Charles Edward McGuire, McDowall noted that while she grew up in a musical family — her father was a professional flutist — she came late to composing. When she finally did in her 40s, she developed a British approach that hints at her influencers, including Benjamin Britten and James MacMillan, but more to the point, reflects her passion for expressive text setting.

As McDowall said in an interview with this publication, “One of the first things for anybody who is setting words to music is to make sure they are good words.” In all the pieces sung on Sunday’s program, she demonstrated an unerring ability to choose great texts and set them to worthy music.

Texts by Seán Street and Baron Alexander Moncrieff Coutanche for Brightest Star and by Joseph Spence for De Profundis inspired McDowall to write heart-rending settings of war poetry that chillingly resonated with world events of the past week, and which inspired moving performances by the Kent Chorale and Cleveland Chamber Choir, respectively, both ensembles led by Scott MacPherson. They were joined in De Profundis by Mario Buchanan, who provided an understated but expressive organ part.

And Three Shakespeare Songs conjoined lines from Antony and Cleopatra, Much Ado about Nothing, Sonnet VIII, Richard II, Romeo and Juliet, and Hamlet into new-made poems that inspired McDowall to write evocative music and Cleveland Chamber Choir to put them across in a fresh way.

The featured premiere, McDowall’s On the Air (Dear Vaccine), sung by the Chamber Choir on Sunday, sets a text edited by Seán Street originating from the Poetry Centers of Kent State and the University of Arizona that envisions the end of COVID-19. Although a bit premature — its final lines read, “We are the choir — unmasked, unveiled, unmuted. Breathe air, and sing!” — the sentiment is a welcome one, and the Chamber Choir, though still masked on Sunday, expressed it ardently.

The afternoon was distinguished by fine singing all around, including the Kent Chorale’s ebullient performance of Feodosy Rubtsov’s Véñiki, CSU Chorale’s expert rendering of Stephen Chapman’s Clocks and McDowall’s Regina caeli, both led by Brian Bailey, and the Chamber Choir’s flawless singing of Britten’s Hymn to St. Cecilia.

That was not the only punning tribute to McDowall, for the program opened with Mack Wilberg’s tuneful Cantus in Harmonia, addressed to the patron saint of music, sung by the massed voices, and decorated with percussion and a two-piano part played by Mario Buchanan and Corey Fowler.

The concert ended with another massed choir piece: McDowall’s The Presence, a polytonal, double-choir work in the spirit of Charles Ives’ Psalm 67. At two hours, this was a long concert. But after all, it’s been two years since choral music was designated a dangerous indoor activity and voices have been silenced. Singers were still masked on Sunday, which took a bit of gloss off the vocal sound, but diminished the enthusiasm of the singers not at all.

During a break in the program, MacPherson dedicated the concert to the memory of Chamber Choir member Megan Thompson, who perished in a tragic kayaking accident earlier that week in North Carolina.