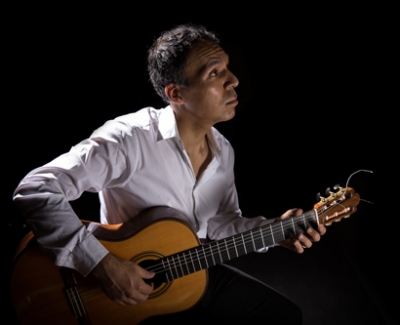 “I like to believe that music speaks for itself. People can derive their own meaning from the sounds they hear,” classical guitarist Jorge Caballero said during a recent phone interview. “It’s like writers who find that it’s best not to say anything about their own work — they prefer readers to form their own opinions. I feel the same way about performance.”

On Saturday, November 12 at 7:30, the Cleveland Classical Guitar Society will present Jorge Caballero in his Cleveland debut. The recital is part of the Society’s International Series at Plymouth Church in Shaker Heights.

Born in in Lima, Peru, Caballero is the youngest person and only guitarist to have won the Naumburg International Competition. Caballero has toured extensively throughout the world, and has been featured with ensembles and festivals ranging from the Los Angeles Philharmonic and Orchestra of Saint Luke’s to the Iserlohn Guitar Symposium in Germany and the Great Performers Series in Washington, D.C. Known for his virtuosity both as a performer and a composer, Caballero has arranged for solo guitar numerous masterpieces originally written for other instruments.

Saturday’s program will include Modest Mussorgsky’s Pictures at an Exhibition in an arrangement by Japanese guitarist Kazuhito Yamashita. This famous — perhaps infamous — arrangement for solo guitar is an enormously difficult technical feat, and has become a staple of Caballero’s repertoire.

Mussorgsky was inspired to write Pictures after viewing an exhibition of the works of his deceased friend, Victor Hermann. Staying true to the multimedia nature of Pictures, the concert will feature poet and professor Philip Metres, in conjunction with CCGS’s residency at John Carroll University. In a pre-concert presentation, Metres, a recipient of the Lannan Literary Fellowship and two National Endowment for the Arts Fellowships, will read from his most recent collection of poetry, Pictures at an Exhibition. Prior to Caballero’s performance of Mussorgsky’s work, Metres will speak about the inspiration for his poems.

I asked Caballero to give some insight into his repertoire choices:

“The Mussorgsky is a piece I began studying as a teenager. Long story short, around five years ago, I finally performed it in Germany. Since then, I’ve been playing it regularly, especially if I’m going to perform somewhere I haven’t played before. As a solo guitar piece, its structure and physical scope create a strong impact. So this piece, or Dvořák’s “New World” Symphony, is an obvious choice for a large piece to finish a concert.

The guitarist said that Berg’s Piano Sonata, Op. 1, is one of his favorite pieces in the classical music literature. “From the first time I heard it as a teenager, I knew that I wanted to have a deeper knowledge of the piece. That’s something you can only obtain by actually playing it, delving into its complications and the inner aspects of how sound is created by combinations of notes. I thought maybe at some point I could be able to come up with an arrangement of it.

“Maybe eight years ago, I went back to it, this time with the intention of actually creating an arrangement. Much to my own surprise, I started to make progress with it. After a few months, I had a first rough draft of a piece. Since then, there have been several mutations, fixes, and reconceptualizations to make it work better. It is one of the projects that I’ve worked on the most. It has a musical depth that other pieces in the literature don’t usually reach. Pictures is like a strange, flashy type of person speaking to you, while the Berg is very profound, like someone speaking from deep within. The messages are equally powerful, but they come from very different places.”

Caballero said that his arrangement of the Bach Sonata, Op. 1, BWV 1003, continues the idea of depth. “Looking through my repertoire, I thought this would be a good piece to present a serious perspective of the guitar. Guitar recitals often present a lighter style with softer pieces. This recital represents a different type of depth that the guitar is able to produce.”

Caballero explained that his process for selecting works to arrange is motivated by his desire to perform the piece. “There is a lot of music that I wish I could arrange, but I have a lot of reservations about even attempting it, so I haven’t tried. The Berg is actually a good example of this. It’s a piece that I always wanted to play, and I thought there was no way I could actually do it until I realized that there was a way, and then I proceeded.”

END_OF_DOCUMENT_TOKEN_TO_BE_REPLACED

What was that strange din coming over the live feed from Ludwig Recital Hall on Friday evening, July 23, as the Miami String Quartet filed onstage to play the third faculty recital of the Kent Blossom Music Festival? Accustomed as we were during the pandemic ban on live audiences to hearing the sound of no hands clapping, it was both startling and thrilling to witness a large crowd putting their hands together to welcome one of the Festival’s perennial favorites back for an in-person performance. END_OF_DOCUMENT_TOKEN_TO_BE_REPLACED

Practical reasons aside, there aren’t many ensembles who can put together an all-Mozart evening as elegantly as The Cleveland Orchestra. END_OF_DOCUMENT_TOKEN_TO_BE_REPLACED