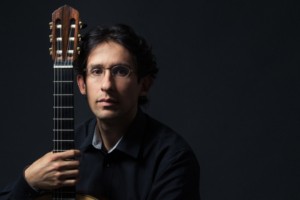 The Cleveland Classical Guitar Society will continue its International Series this weekend with a performance by Pablo Garibay on Saturday, November 9 at 7:30 pm in Plymouth Church in Shaker Heights. His program will include works by Leo Brouwer, Simone Iannarelli, Manuel Ponce, Eguardo Angulo, and Antonio José. Tickets are available online.

I reached Pablo Garibay at his home in Morelia, Mexico, and began by asking him if he has ever been to Cleveland.

Pablo Garibay: No, this will be my first time and I am thrilled about it.

Mike Telin: Your program includes names of composers that I’m familiar with, and others that I’m learning about for the first time. Could you please say a few words about each of the works.

Pablo Garibay: Leo Brouwer is one of the most important composers for our instrument in this century. He wrote many big works including sonatas, suites, and concertos.

I chose these two pieces because they are arrangements of popular music. It’s music that is well-written and -arranged for the guitar. They are beautiful, small pieces. I like them very much. “Canción de Cuna” is a lullaby and “Ojos Brujos” means bewitched eyes.

Simone Iannarelli’s “The Last Coffee Together”

He’s an Italian composer living and teaching in Mexico. I met him eight or nine years ago. He’s still young and is composing solo, chamber music, and concertos for the guitar.

He composed a big piece called Coffee Pieces, where each movement is based on various types of coffee. This one, “The Last Coffee Together,” closes the cycle. It’s a short piece, not sad, but melancholy. It’s been in my repertoire from the time I met him. He arranged it for guitar and orchestra, and I recorded that for my last CD for Naxos, El Árbol de la Vida: Music from Mexico.

This was written for Segovia in 1927. Of the six sonatas that Ponce wrote for the guitar, from my point of view, the language of this one shows him as an impressionistic composer. It’s full of French harmony and the melodies are very personal to him. The texture is transparent throughout all three movements. I think it’s one of his most interesting pieces along with his Sonata for harpsichord and guitar.

Angulo is a Mexican composer in his early 60s. He composed almost all of his guitar repertoire when he was young, and he wrote nearly all of it for the German guitarist Michael Tröster.

The cadenzas are from the second and third movements of his concerto for guitar and orchestra, El Alevín, which is also arranged for guitar and string quartet. It tells the story of a little fish struggling to live in the sea. Angulo says it is happy music — he says he uses music to be happier than he actually is.

He died quite young — he was killed in the Spanish Civil War — and it’s the only piece he wrote for the guitar. I consider it to be one of the best pieces ever written for the instrument together with the Ponce and the sonatas by Ginastera and Castenuovo-Tedesco. All four of these composers explored the guitar in a deep and clever way although none of them were guitarists.

MT: Do you find it difficult to play works by composers who were not guitarists?

PG: In the case of the Ponce, he proposed a lot of things that could not be played, but it was written for Segovia, and he made a lot of changes.

But when composers write for other instruments, their compositions for guitar always become more interesting. They have many colors that are borrowed from other sounds and textures. Ponce, for example, wrote a lot of piano music and it is more well-known than his repertoire for guitar. At least in Mexico, his piano music is played everywhere.

MT: When did you start playing?

PG: I started quite late — I was fourteen years old. Before that I wanted to study medicine or architecture. My brother was my first teacher. I heard him playing works by Villa-Lobos, Giuliani, and other classical composers and I fell in love with the instrument. So from the beginning I studied classical music.

I love all kinds of music — jazz and rock — but I didn’t have time to learn all of the techniques or other instruments like the electric guitar, which is a completely different instrument.

MT: When I was reading your resume, I was struck by how many concertos you have played with orchestras.

PG: Playing with orchestra is one of the most interesting and fun things to do. I like to hear how the guitar blends with the strings, woodwinds, and brass. That inspires me to go deep into the sound of the guitar. And for me, sharing the stage with my colleagues is one of the things I enjoy most.

I have been very lucky to play with so many orchestras. Their programs always have piano concertos — it’s not often that they program for the guitar.

MT: You made your United States debut with JoAnn Falletta and the Buffalo Philharmonic. Was that part of the prize package for winning her competition?

PG: Yes, and that was an amazing experience. JoAnn is a guitarist and the love she has for the sound of the instrument was such an inspiration. We were all dizzy with her love of the music. This was an important period in my career to meet her and win that competition and to play with such a high-level orchestra.

Northeast Ohio’s Les Délices has long been that rarest of beasts: a world-class organization so proud of its region (ours) and repertoire (distinct niches in pre-1800 music) that it never tries to be everything to everyone, paradoxically making a strong case for a broad, curious international following. In the December episode of its SalonEra series, the ensemble embraces its strengths and community to marvelous effect. END_OF_DOCUMENT_TOKEN_TO_BE_REPLACED

END_OF_DOCUMENT_TOKEN_TO_BE_REPLACED

Another I remember fondly is Gian Carlo Menotti’s Amahl and the Night Visitors.  Commissioned by NBC, the one act, made-for-television opera, premiered on December 24, 1951, at the network’s studios in New York’s Rockefeller Center. And now, through the wonders of technology, Cleveland Opera Theater has created a magical new production of the work which is available on demand through January 6, 2021 (Three Kings Day). END_OF_DOCUMENT_TOKEN_TO_BE_REPLACED

Jessen has now followed up with her second solo CD, Winter Chapel. Recorded on January 17, 2020 in Oberlin College’s Fairchild Chapel and available on Carrier Records, the album is a continuum in Jessen’s journey to push the musical boundaries of her instrument and herself as an improviser. END_OF_DOCUMENT_TOKEN_TO_BE_REPLACED