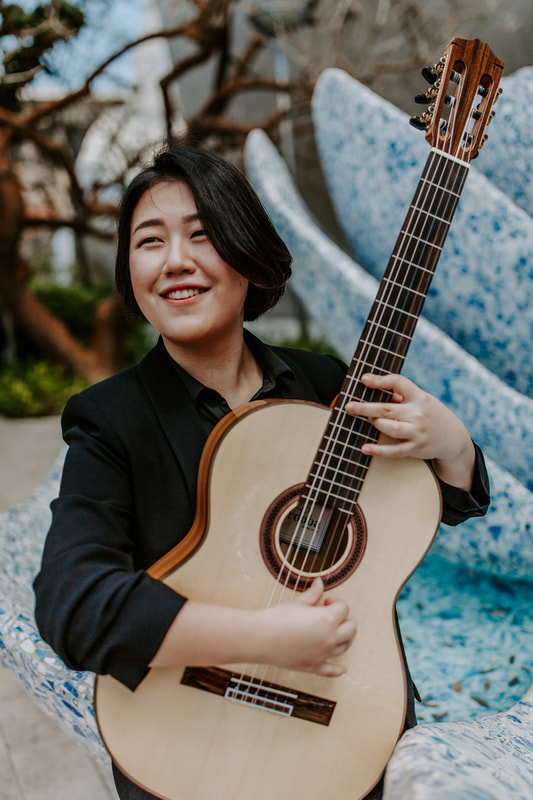 Remote, pre-recorded performances have become an important part of the concert world during the coronavirus pandemic, but we’re all still figuring out how to talk about them.

When the Cleveland Classical Guitar Society presents Bokyung Byun in just such a performance on Saturday, October 17 at 7:30 pm, can we call it her Cleveland debut, even though she’ll be at her home in Los Angeles? And when she brings Theo Chandler’s Six Melodies to listeners’ ears for the first time in the work’s history, can we call it the premiere, even though it won’t be live?

Maybe the particular words don’t matter so much. The fact is, there’s plenty that’s new in this concert.

Byun is not only a fresh face on the Guitar Society’s series, but in 2018 she became the first female winner of the JoAnn Falletta International Guitar Concerto Competition. On the other hand, Chandler, whose awards include the SCI/ASCAP Graduate Commission, might already be familiar to local audiences: he’s an Oberlin Conservatory alumnus who had a piece premiered by Les Délices in April 2019. But Six Melodies, in part a reflection on the painful events of this year, is his first work for guitar.

The piece came about through the Sounding Board Project, an initiative co-founded by Byun that gathers together composers and guitarists once a year to create new music. “This year, when we were trying to plan something online, so much was happening — a lockdown, the Black Lives Matter protests,” Byun said during a recent interview. “It felt like we needed to reflect that in the music.”

What followed was a commissioning project called Catharsis. Inspired by the Guitar Foundation of America’s #TearsFor2020 movement, it resulted in short pieces based on Francisco Tárrega’s Lágrima (“Tear”), a particularly famous work among guitarists. “We all know it — it’s sort of like our Minuet in G,” Byun said, laughing. 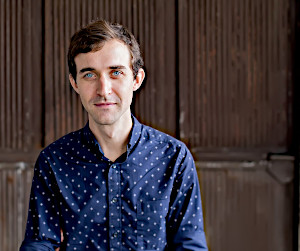 Among those miniature commissions was Chandler’s minute-and-a-half “Tune for Weary Days,” which you can hear online as performed by six different guitarists, including Byun — and which soon became the first movement of his Six Melodies.

Byun immediately sensed an arc across the six movements. “It has a storyline going through it, which is basically what we’re all feeling. One day you’re okay, and the next you’re like, ‘I can’t do this anymore’ — that whole roller coaster of emotion.”

Playing it has been cathartic for Byun, which is just what she wanted from the commissioning project. “There are some times when words just can’t describe how I feel, especially these days, because we’ve never gone through anything like this before,” she said. “I don’t want to use this positive word, but in a way it’s satisfying because it helps me say what I want to say.”

The Six Melodies fit snugly into a program that’s a unique mix of traditional and new. Even with composers who are among the most familiar in the guitar world — Ponce, Castelnuovo-Tedesco, and Barrios — Byun has some surprises.

“People know Tedesco, but this Escarramán suite is not exactly his most popular piece,” she said. “You’ll recognize his use of harmony, but it’s something  refreshing.”

Manuel Ponce’s Theme, Variations, and Finale is a common sight on programs. “But I’m playing the manuscript version instead of the Segovia edition that we’re used to hearing, so this is another way of approaching something familiar with a new perspective.”

That isn’t a case of superficial differences — Byun said that when she first heard the manuscript version, it almost felt like a completely different piece. That’s because Segovia, showing off his editorial penchant for repetition, expanded on Ponce’s binary structures, changing them from A-B form to A-A-B, she explained. “So in this Ponce version, the piece goes by a lot faster, in a good way.” It also includes variations that Segovia left out, and arranges them in a different order that makes more sense to Byun. “Little by little, it’s introducing and developing ideas.”

Speaking of conclusions, Byun and I ended our conversation by discussing her experience in the Falletta Competition. “Playing with orchestra is always fun, especially being a guitarist, since you don’t get the chance all that often,” she said. “So I didn’t go there expecting to win any prize. I just thought, what a great opportunity — and to work with Falletta herself, as well.”

And because JoAnn Falletta and the Buffalo Philharmonic know guitar concertos “inside out,” it was even more of a learning experience for Byun than a typical performance with orchestra.

Perhaps the cherry on top was the camaraderie among the competitors. “Usually there’s this tension — not that people are mean — but for some reason this group was really friendly, cheering each other on.”

Byun’s performance will be broadcast on YouTube. Click here to RSVP — as the concert date draws nearer, you’ll receive the link (which lasts for two months), a digital program booklet, and entry to a post-concert reception with the guitarist.

END_OF_DOCUMENT_TOKEN_TO_BE_REPLACED

What was that strange din coming over the live feed from Ludwig Recital Hall on Friday evening, July 23, as the Miami String Quartet filed onstage to play the third faculty recital of the Kent Blossom Music Festival? Accustomed as we were during the pandemic ban on live audiences to hearing the sound of no hands clapping, it was both startling and thrilling to witness a large crowd putting their hands together to welcome one of the Festival’s perennial favorites back for an in-person performance. END_OF_DOCUMENT_TOKEN_TO_BE_REPLACED

Practical reasons aside, there aren’t many ensembles who can put together an all-Mozart evening as elegantly as The Cleveland Orchestra. END_OF_DOCUMENT_TOKEN_TO_BE_REPLACED