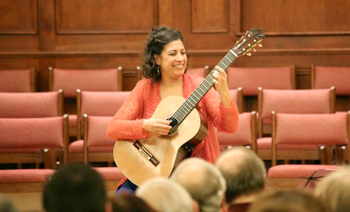 Performing on the Cleveland Classical Guitar Society’s International Series, French guitarist Gäelle Solal thoroughly charmed a good-sized audience at Plymouth Church in Shaker Heights on Saturday evening, February 28. She seems to have had a similar effect on guitar students in a series of CCGS-sponsored classes preceding her performance. No wonder. She has a winning personality, and her playing is ravishing.

Solal devoted the first half of her recital to her own “work-in-progress” transcription of J.S. Bach’s Violin Partita No. 2, the one that ends with the immense Ciaccona. She played the dance movements with ruminative elegance (the Allemanda), fleet rhythms (the Corrente), brooding sadness (the Sarabanda) and fluent grace (the Giga). She also played those movements without repeats, which tipped the emotional weight of the Partita even further toward the Ciaccona. Nonetheless, the chaconne was light and refined, even considering the inherent sonic differences between a plucked and a bowed instrument.

In fact, the guitarist’s inflections and musical gestures were so subtle and nuanced that it would have been a fine thing to hear her play Bach in a smaller room. As good an acoustical space as Plymouth Church can be, it’s still a bit too roomy for every detail of a performance like Solal’s to carry to the back of the balcony. Certain lines in the dance movements disappeared as they descended lower into the instrument’s range, and some of the variations in the chaconne lost presence.

Solal’s virtuosity, flair and range of arresting guitar effects were fully on display in the second half of the program, which ranged from Turkish folksongs to works by a Spaniard and three Brazilians. 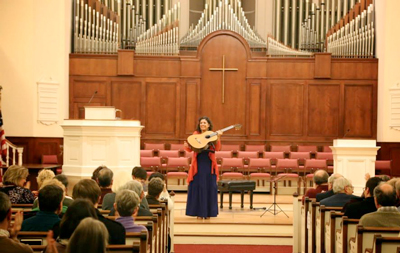 Exotic jangles, slaps and dampened strings suggested the traditional Turkish long-necked lute, or Saz, in Kevin Sediki’s Drama Köprüsü, a ballade chronicling the Robin Hood-like escapades of the bandit Hasan Debre. A simpler arrangement of another Turkish folksong involving a yellow flower was straightforward and pretty.

Isaac Albéniz’s Serenata, Torre Bermeja, gave Solal more material for subtle nuance, including a humorous echo effect that drew a chuckle from the audience. Brazilian composer Egberto Gismonti’s Palhaço (Clown) cannily fused several different musical styles. His Agua e vinho (Water and wine) was reflective, based on words “so sad,” Solal said, “I’m not going to tell you” — which didn’t prevent her from making devil’s horns and mimicking drinking before launching into the song.

Anibal Augusto Sardinha, who goes by the name “Garôto,” was the final Brazilian on the program. His Lamentos do Morro, unhelpfully translated in the notes as “Lamentation of the favela” (which turns out to mean “slum”), brought the evening to an official close with its adventuresome harmonies and Solal’s eye- and ear-catching special effects. Two encores followed.

This was the second CCGS concert I can recall that seemed to suffer from its intermission. With little more than an hour’s worth of music on the program, does it really make sense to take a 20-minute break after a 25-minute first half? On Saturday it only served to interrupt the performance just at the point when your ears were finally adjusting and honing in. Too bad, because the expert playing of a performer like Gäelle Solal really deserves our uninterrupted attention.

The cimbalom was the feature of the show, an instrument capable of taking on many personas. Its performer, Chester Englander, has shaped his career around the instrument, and has inspired composers to write more repertoire for it, some of which was presented on the program. END_OF_DOCUMENT_TOKEN_TO_BE_REPLACED

You wouldn’t expect that acoustic from a glance at the nave, which is wide and long, but not especially lofty. But when I guest conducted a local amateur choir and professional orchestra in Beethoven’s Mass in C there a few years back, during the first rehearsal we released the final chord of the “Gloria” and listened in astonishment for the next several seconds. The sound continued to roll down the space like the big wave that surfers dream about. END_OF_DOCUMENT_TOKEN_TO_BE_REPLACED