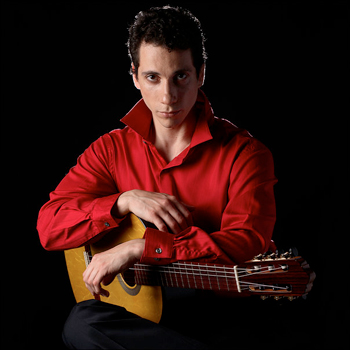 The Cleveland Classical Guitar Society took a different approach to the term “Classical” on Saturday, November 12 at Plymouth Church in Shaker Heights when they presented their first concert featuring Flamenco music. And as we have come to expect from CCGS, their choice of artist could not have been better. From first note to last, Russian guitarist Grisha Goryachev performed with brilliant technique and musical passion during his program that could have easily been subtitled “Homage to Paco de Lucía.”

It is understandable why more than half of Goryachev’s program consisted of compositions or arrangements by that Spanish virtuoso: as a student growing up in St. Petersburg, then Leningrad, hearing a concert performed by de Lucía is what inspired Goryachev to pursue Flamenco.

In an interview with this publication, Goryachev said that he feels that Flamenco is his music, and he backed up that statement as he owned all thirteen pieces on the program. Goryachev performed with crystalline articulations during Farruca by Sabicas, a Spanish guitarist of Romani origin, then proceeded into a dazzling account of Manolo Sanlúcar’s Zapateado.

After demonstrating his pyrotechnical skills during Mario Escudero’s jazzy Bulerías, Goryachev captivated with Rafael Riqueni’s folkish/jazzy Guajira. It left one asking, ‘How does he do that without blinking?’ His effortless performance of Vicente Amigo’s Granadina sounded so natural it was like an impromptu. Rounding out the list of works not by de Lucía was the beautiful Zapateado by Juan Manuel Cañizares — although that award-winning Catalonian did perform with de Lucía.

It’s impossible not to draw artistic parallels between Paco de Lucía and his Argentine counterpart Ástor Piazzolla. Both led the way in the creation of “new” styles of Flamenco and Tango by incorporating elements of classical and jazz into their music.

It was during the Flamenco Nuevo works by de Lucía that Grisha Goryachev was at his best, sounding as though he was channeling the master composer himself. The Russian guitarist brought a never-ending array of colors, spot-on intonation, clarity, and a sense of the otherworldly to his performances. Compositions by de Lucía included his Bulerías, Taranta, Colombiana, Fandango, Alegrías, and another Bulerías, as well as his  arrangement of Ernesto Lecuona’s famous Malagueña.

Prior to the concert, members of the Fairmount Spanish Dancers led by Saundra Bohl presented a thoroughly enjoyable and informative demonstration of Flamenco dance and singing. Hopefully Flamenco will become a regular part of CCGS’s programming.