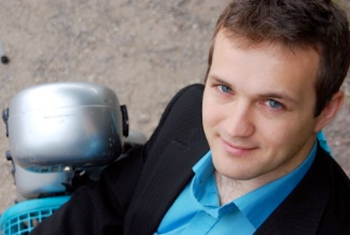 On Saturday, April 11 at 7:30 pm at Plymouth Church in Shaker Heights, the Cleveland Classical Guitar Society will present the final concert of this season’s International Series with a performance by Vladimir Gorbach. “I’m really looking forward to the concert and getting to know Cleveland,” the Russian-born guitarist said during a telephone conversation from Los Angeles. “After winning the 2011 Guitar Foundation of America competition, I did perform in Ohio as part of the winner’s tour, but this will be my first time in Cleveland.” Gorbach’s debut performance will feature works by Miguel Llobet, Domenico Scarlatti, J.S. Bach, Dionisio Aguado, Ástor Piazzolla, and Alberto Ginastera. A special pre-concert performance by students from CCGS’s education program will begin at 6:50.

I began our conversation by asking Vladimir Gorbach to say a few words about his program.

Miguel Llobet’s Variaciones sobre un tema de Fernando Sor: “This is one of the most popular themes ever. The tema is an old Spanish/Portuguese sarabande, and during the 1700s composer-players like Mauro Guilliani would write variations on it. But as the new century came along, Llobet and other players thought these pieces weren’t challenging enough so they began to write their own, which are more diverse in color and virtuosity. I’m sure that Llobet played Sor’s version in his own concerts, but Llobet was kind of like Stravinsky, who said, ‘I like the musical idea, but I would do it this way.’ In fact the theme and the first three variations in this piece are Sor’s, but the rest are by Llobet.”

Domenico Scarlatti’s Sonatas K. 239, 87 and 27: “Scarlatti’s keyboard sonatas have always been an inspiration for guitarists. He spent the majority of his life in Spain, and was one of the pioneers of folk and Spanish flamenco music. But the diversity of his sonatas and the specifics of the keyboard instruments of that time enable guitarists to make very nice arrangements of them. They’re short and usually played in sets. I’ve chosen to use the fast-slow-fast approach, so the three sonatas will work like a multi-movement piece.”

Are these Gorbach’s own arrangements? “I took the Llobet path. I first used someone else’s arrangements but I changed things around a little, so they feel like they’re mine. The arrangement of the first one, K. 239, is by David Russell. It’s very nicely arranged so I didn’t touch a thing.”

J.S. Bach’s Suite BWV 997: “This is one of the real pearls of the guitar repertoire. We’re lucky to have it. It is originally for lute or keyboard, but it is our piece. I think that when you look at Bach’s output, it is one of the most exciting suites. It has an unusual fugue, which is written in da capo form, so the fugue not only begins the movement, but also returns at the end. This approach is unusual for Bach.”

Dionisio Aguado’s Andante and Rondo No. 3: “This is the standard piece to learn in all of the guitar repertoire and is often found on repertoire lists of competitions. It is also an example of a piece by a 19th century guitarist and composer who drew on material from music of the day — like operas, popular sonatas and symphonies. When I hear this piece, I can kind of sense that Beethoven was around. Of course there are parts in it where Aguado is showing off his own abilities as a player. He was also a well-known teacher and wrote an extensive guitar method that is still used today.”

Ástor Piazzolla’s Four Seasons of Buenos Aires: “It’s a wonderful piece that’s always fun to play. It’s also a great arrangement by Sergio Assad, an excellent guitarist and a composer who has such a deep feeling for the instrument. Although the piece was originally written for Piazzolla’s quintet, Assad didn’t approach his arrangement by leaving out a lot of stuff, like many arrangements of these pieces do. It’s a very interesting adaptation that feels 100% like a guitar piece, which is a rare thing.”

Alberto Ginastera’s Sonata, op. 4: “I think this is one of the most important works written for the guitar in the last 50 years. It was written in 1976, and it still stands alone as a stellar work by a major composer. In general, the guitar is considered to be a difficult instrument to write for. There are many challenges that a lot of non-guitar composers cannot overcome — ‘why can’t you play this chord here, or why can you play it here but not there?’ We are all grateful that Ginastera took the time to learn how to write idiomatically for the instrument. It’s a very inspiring piece, very modern, and all about the music of South America, specifically Argentina, which is a guitar country.”

How did Vladimir Gorbach, who is from Siberia, discover the classical guitar? “Russians really like music and have a lot of access to the piano and violin, but when I was growing up it was easier to get to the guitar. This was during the 1980s, when baroque music from the West started making its way into Russia, so we were able to hear a lot of music performed on the guitar. As a first instrument to learn, it was even more popular than the piano or violin. I have an older brother who played guitar, and I guess that’s how I got hooked. Eventually I spent a lot of time playing it too. I guess my parents saw this and thought the proper path would be to study with a teacher. I did not oppose the idea.”

Is there a Russian school of classical guitar playing? “Yes, but it is very new, although it is now a very strong one given how many emerging young Russian classical guitarists there are. This was not the case in the past. The pedagogical power of the guitar in Russia came to its peak in the 1980s and 1990s, when there were finally enough teachers and music to learn from and play. The work ethic was borrowed from the Russian piano and violin schools — it’s a very systematic and serious approach. In Russia, if you study music you pretty much have the opportunity to do it professionally from an early age. That’s how the system was built. Guitarists were very fortunate to be able to get on that train of education. So there is a Russian school, and although it’s not Russian Russian, it has given the world good Russian musicians who play this originally Spanish instrument.”

The first such video, capturing the October 20 performance of Resilience at First Baptist Church in Shaker Heights, delivered handsomely on that promise. Erica Brenner’s sensitive videography and audio mixing preserved brilliant performances of music that illuminated two troubled periods in history: the plague of London in 1665, and the outbreaks of cholera and dysentery that dampened but failed to defeat the human spirit at the end of the American Civil War two centuries later. END_OF_DOCUMENT_TOKEN_TO_BE_REPLACED

The Diamond Brass Quintet opened Rocky River Chamber Music Society’s new season on Monday, October 12 with nobody in the pews at West Shore Unitarian Universalist Church. Like most performances these days, the concert was only attendable online. The players were widely-spaced on the stage, plexiglass shields were in place to cut down on aerosol transmissions, and the quintet took two intervals to go outdoors and let the air in the sanctuary refresh itself. (Rehearsals had been held outside as well.) END_OF_DOCUMENT_TOKEN_TO_BE_REPLACED

“Bewitched,” the first subscription concert of this season by Les Délices, can be summed up in one word: sensational. In her introductory remarks, director Debra Nagy talked about the “Embracing Change” theme of the season and completely rethinking the concert experience for streaming. The detailed planning was in evidence throughout the program. “Bewitched” was not just a concert; it was a carefully planned musical film, with elements of drama and music appreciation, all in support of the inspired program choices featuring Medea and Circe, two famous witches (or sorceresses, if you prefer) of classical antiquity. END_OF_DOCUMENT_TOKEN_TO_BE_REPLACED

END_OF_DOCUMENT_TOKEN_TO_BE_REPLACED

Though it had amassed a vast trove of audio over the decades, The Cleveland Orchestra has come late to the game in the video department. Even so, the organization wasn’t about to rush to produce the equivalent of home movies to keep its patrons engaged while live events were on hold. END_OF_DOCUMENT_TOKEN_TO_BE_REPLACED

END_OF_DOCUMENT_TOKEN_TO_BE_REPLACED

Although it wasn’t the original plan to go online last weekend for the final round of the James Stroud Classical Guitar Competition, moving to a digital format suited the event well. Young performers Aytahn Benavi, Patricia Hernandez, Ian Tubbs, and Eric Wang played in the intimate setting of their own homes, giving everyone who tuned in a front row seat. END_OF_DOCUMENT_TOKEN_TO_BE_REPLACED