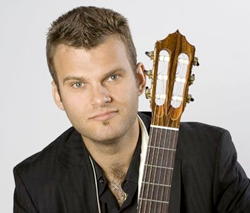 All was perfect inside Plymouth Church this past Saturday evening, October 18. The responsibility for that perfection lay squarely in the hands of Polish classical guitarist Lukasz Kuropaczewski, who was making his Cleveland debut. The program was presented as part of the Cleveland Classical Guitar Society’s International Series.

Kuropaczewski, an imposing figure with a witty sense of humor, began his slightly less than one-hour program with an inspired performance of Mauro Giuliani’s Rossiniana No. 3. It’s one of six fantasies published by the composer, each of which draws on material from Rossini’s operas — in this case, La donna del lago, Il turco in Italia, Zelmira, and Ricciardo e Zoraide. Kuropaczewski brilliantly tossed off the work’s many virtuosic passages with ease. And, as an opera singer performing Rossini is prone to do, he relished each lyrical moment. Indeed, Kuropaczewski captured the essence of Rossini so well it would not have been surprising if he had begun to sing the arias as well.

Like Bach, Chopin and Scriabin, Mexican composer Manuel Ponce also composed 24 preludes, which together explore all 24 musical keys. Kuropaczewski selected ten for Saturday’s program. His performance held the audience in rapt attention as he turned each prelude into a song without words.

Spanish composer Antonio José was a student of Maurice Ravel, whose influence is evident in José’s captivating Sonata para Guitarra. A work in four movements, the sonata places numerous technical demands on the performer while providing plenty of lyrical moments. Kuropaczewski’s interpretation of the opening “Allegro moderato” was arresting. The lilting “Minuetto” was pure elegance and the “Pavana triste: Lento,” passionate. The rapid passages during the “Finale: Allegro con brio” were dazzling. From beginning to end the guitarist played with a full-bodied tone and perfect intonation. His sensitive voicing of chords rivaled those of an accomplished pianist.

Lukasz Kuropaczewski ended his program with a remarkable presentation of Isaac Albeniz’s Asturias. It was the perfect conclusion to an astonishingly beautiful recital.

END_OF_DOCUMENT_TOKEN_TO_BE_REPLACED

The strings-only work by Berg has made relatively frequent appearances on the Orchestra’s programs. In 2021, the musicians recorded it for the In Focus series, and it appeared again on last year’s European tour. Friday’s rendition maintained the group’s characteristic light and effortless playing, each section blending as much as possible to echo the work’s original form as a string quartet. At fifteen minutes total, the piece is quite short, but the dense encoded musical meanings require some extra-attentive listening. Splitting up the three movements ensured that each one could be appreciated on its own. END_OF_DOCUMENT_TOKEN_TO_BE_REPLACED