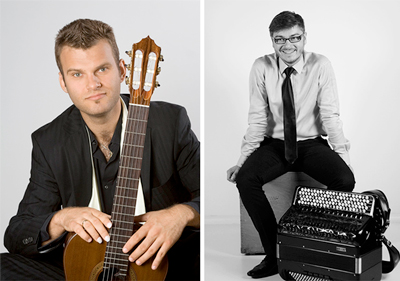 When Łukasz Kuropaczewski presented his remarkable Cleveland Classical Guitar Society debut recital in October of 2014, the powerhouse guitarist thrilled audiences with a performance that was technically brilliant and musically alluring. On Saturday, March 12 at Plymouth Church, the Polish guitarist returned to Cleveland, this time sharing the CCGS stage with the powerhouse accordionist (and his countryman), Maciej Frąckiewicz. Once again, the results were stunning.

The musicians first came together at the behest of Krzystof Penderecki, who invited them to be part of a project for his festival. The composer’s intuitions were spot on, for Kuropaczewski and Frąckiewicz play from a single heart and mind — which was immediately evident during their performance of Isaac Albéniz’s Asturias which opened the program. Frąckiewicz’s clever arrangement brought new life to the classic work.

Equally clever was his arrangement of Boccherini’s Grave and Fandango. Originally written for guitar and string quartet, Frąckiewicz adapted its string parts for accordion, which he played with poise. Kuropaczewski played with technical assurance and musical sensitivity. The duo sounded regal during the Fandango.

The program included three 20th-century works. Jacek Rabinski’s Il Vento Sferza is a dark and brooding minimalist work which begins with a long chord in the accordion. As the piece progresses, dissonances cry out with guitar tremolos accompanied by deep rumblings in the accordion’s lowest register. The haunting work concludes with the squeezing of the final breaths of air from the accordion as the guitar plucks soft chords. The performance was riveting.

Frąckiewicz ‘s duo arrangement of Mikołaj Górecki’s Arioso e Furioso, originally written for guitar and orchestra, received its U.S. premiere at the concert. The Arioso beautifully juxtaposes dissonant chords in the accordion against melodic lines in the guitar. The players’ technical prowess was perfectly suited for the neo-classical Furioso’s fast scale passages, which they tossed off with aplomb. The performance was a tour-de-force.

If you didn’t know Alfred Schnittke’s Suite in Old Style, you’d think it was by an unknown Baroque composer. The melodic “Pastoral” is followed by a “Ballet,” a fast march with a humorous, false ending. Following a melancholy “Minuet”, and a fast “Fugue”, the concluding “Pantomime” in 3/4 time simply ends without any harmonic resolution. The Duo brought out each of the movement’s distinct musical styles.

Maciej Frąckiewicz outdid himself during Mozart’s 12 Variations on “Ah, vous dirai-je, Maman,” the evening’s only solo. The “Twinkle, Twinkle Little Star” theme that opens the work was light and playful, as though Frąckiewicz was channeling the composer. The accordionist’s technical command shone through during the work’s many scale passages.

The concert concluded with two tango-inspired works by Argentina-born composers. Fernando Carlos Tavolaro’s soulful Milonga is full of sensuality that perfectly captures the mystery of the milonga. Tomás Gubitsch’s Travesuras is a driving “Tango Nuevo” full of syncopations and hemiolas. The Duo’s performances were thrilling.

The appreciative audience rewarded the players with an ovation, clearly asking for more, and Kuropaczewski and Frąckiewicz responded with an encore.

Jackson began the program with a recitation of Langston Hughes’ poem “Helen Keller” — the first of five poems by Hughes that served as interludes between each piece on the first half. END_OF_DOCUMENT_TOKEN_TO_BE_REPLACED

Pianos with pins and tape on strings, a bass drum and tam tam, crotales, Almglocken, and vibes. Microphones were hooked up all around the instruments. The feed was sent to speakers around the room. Lighting designer Nicholas Houfek hung incandescent globes over the arrangement of instruments from thin black wires stretching across the beams. END_OF_DOCUMENT_TOKEN_TO_BE_REPLACED

From the podium, Elim Chan set an ambitious tone for the evening. The rising star conductor, here in her Cleveland Orchestra debut, has a commanding style, and every twist and turn in Saturday’s performance tracked closely with her baton. END_OF_DOCUMENT_TOKEN_TO_BE_REPLACED