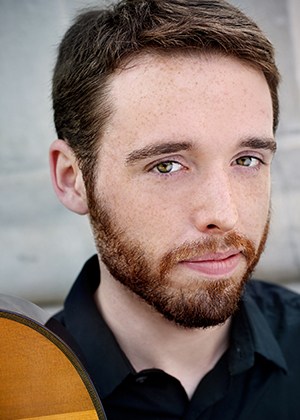 Guitarist Colin Davin explored the relationship between old and new on his opening recital of the 19th Annual Cleveland International Guitar Festival on June 6, pairing Steve Reich’s Electric Counterpoint with David Crowell’s Point Cloud (a Cleveland premiere) and two Bach transcriptions. The two-time prizewinner of the Guitar Foundation of America International Competition, who currently teaches at the Cleveland Institute of Music, presented an evening of utmost musicianship at Mixon Hall.

First up was the Reich, which moved along with crisp energy. Davin performed the version for electric guitar and tape, getting into the groove of the prerecorded track and blending seamlessly. The three movements each pursue their own cluster of interlocking patterns — fragments that weave in and out of alignment, swelling in phases. Although the piece sounds a bit too derivative of Reich’s earlier “Counterpoints” (namely, New York Counterpoint), Davin’s interpretation was very fine, and served as a great precursor to Point Cloud.

Introducing Crowell’s work, Davin said, “the title describes a set of data points in space. It’s involved in 3-D printing. But that’s all I can really tell you.” The composer describes it as a musical response to the “lush textures, rhythmic richness, and layered guitars of Steve Reich’s Electric Counterpoint,” and it featured a similar accompanimental track of pre-recorded guitars, with Davin soloing live. Melodies emerged from uncertain rhythms, rushing atop the brooding undercurrents. Repeated swells built to a similar falling figure again and again, establishing a sense of distance traveled. Davin brought out interesting moments throughout the piece’s varied sections, which were sometimes complex and sometimes very simple — for a while, Cloud Point meditated on near-static chord changes. Although parts of it tended toward road trip soundtrack, the whole thing was enjoyable.

Bach’s solo violin works almost beg to be transcribed — versions exist for just about every instrument, and musicians of all types take a crack at them in concert. The six Sonatas and Partitas for Solo Violin (BWV 1001 – 1006) are luminous explorations of harmony and foundational in establishing idiomatic violin writing, but their impact often feels diminished when channeled through an instrument such as the clarinet (or, even murkier, the trombone).

Thankfully, Davin made a clear case for concertizing the works on guitar.  He performed the Violin Sonata No. 3 on the first half, and closed with the Partita No. 2 on the second, all from memory — a formidable task in itself. From his lovely phrasing to his glimmering, immaculate technique, he pursued Bach’s music to its core, communicating multitudes along the way.

Davin began the Adagio from the Third Sonata with a comfortable sense of time, making sure not to rush. He treated each subject of the Fuga with clarity, highlighting the sublime interplay of simultaneous lines, and savored the exquisite suspensions and lullaby lilt of the Largo. He tore into the Allegro assai with zeal, completing the arc of the piece with appropriate climax.

This successful approach returned for the Second Partita. Although the classical guitar can handle chords (the ‘double-stops’ in the original violin score) just fine, the real challenge for the player is creating a sense of direction through Bach’s slower movements. Once plucked or strummed, the sound resonating from a guitar’s strings immediately dissipates, whereas a violinist can drive through notes with the bow. Without developing and maintaining careful intensity, the longform architecture of Bach’s notes in relation to one another can be lost in a stagnant, apathetic torpor.

Davin steered clear of this pitfall with dedicated effort, crafting beautiful trajectories out of downtempo material. The Allemande ebbed and flowed nicely into the Corrente, the Sarabanda (albeit perhaps fast) arrived tastefully into the Giga, and everything moved organically toward Bach’s colossal final movement, the Ciaccona.

Ciaccona dwarfs the rest of the Partita, and charts a course through both stasis and turbulence until ultimately arriving at salvation. The piece gains momentum during cycles of increasingly fast notes, and Davin handled the blistering technical demands of the fastest parts with better accuracy than most violinists can hope for in performance. Ultimately, the profundity of his interpretation arose from his dynamic contrast — the quietest sections were delicate and serene, tender meditations on the Ciaccona’s inimitable depth.

Music director and conductor Daniel Meyer built his playlist around Cleveland themes and scenes. “Exploration CLE” made use of engaging selections from the classical canon and beyond that celebrated “what makes Cleveland so special.” Happily, he and his musicians avoided constructing a visual slide show, choosing to let the music speak for itself. END_OF_DOCUMENT_TOKEN_TO_BE_REPLACED

You could see the relationship at work on a practical level. Repertoire for two players at the same piano requires a certain choreography. There’s just one of each pedal to share, and the hand crossings left and right — which can be so fun to watch a soloist pull off — get more complicated when another person’s involved. At times, Pompa-Baldi drew a hand away from the keyboard and into his body, making room for Friscioni, and at the close of a few delicate phrases, the two were crouched together over the same final notes at one end of the instrument. END_OF_DOCUMENT_TOKEN_TO_BE_REPLACED

The signature sounds of these famous film scores are not so much John Williams’ invention as allusions to other classical pieces. The foreboding half-step from Jaws, growing more and more furious in the cellos and basses, shares something with Dvořák’s “New World” Symphony and Bartok’s Miraculous Mandarin. END_OF_DOCUMENT_TOKEN_TO_BE_REPLACED