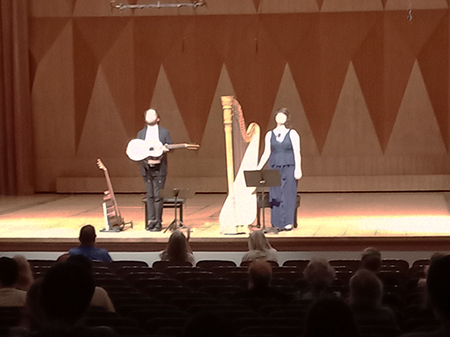 You’d think that two instruments that create their sound by plucking strings might not provide enough variety to sustain interest over the course of a whole program, but guitarist Colin Davin and harpist Emily Levin have news for you.

The Davin-Levin Duo played the second recital of the 2022 Cleveland International Classical Guitar Festival on June 3 in Kulas Hall at the Cleveland Institute of Music.

Their engaging program, containing original arrangements of 20th-century works and a recent piece, was the first of four during the festival to feature guitarists playing with other instrumentalists, and Davin and Levin made the most of their opportunity to plunge into the rich possibilities of collaboration.

The combination of plucked instruments works well if you choose the right material and have the musical intelligence and technique to put it across. Surely these properties were in evidence from the very opening work, Philip Glass’s Etude No. 6, which I and a few others missed by minutes due to parking complications.

Later, those qualities were present in abundant variety in the largest work on the program, Davin’s splendid arrangement of György Ligeti’s 11-movement Musica Ricercata. The composer intended “to build a New Music from nothing, so to speak,” and the result is something akin to watching atoms assemble themselves into molecules in slow motion.

Ligeti tempers what might be daunting material with a healthy measure of sophisticated wit, and Davin and Levin successfully put that quality across in their flawless but relaxed playing. Both players have developed elegant gestures for releases at phrase endings that add a welcome bit of showmanship to their performances.

Between the Glass and the Ligeti, the duo played their own arrangements of Florence Price’s Three Roses (Yellow, White, and Red), a lovely little salon piece with just a touch of sentimentality, and of Cluade Debussy’s popular Suite Bergamasque, with an unhurried account of the famous “Clair de lune.”

Then, an original work, Jonathan Cziner’s Wanderlust, explored the desire to get out into the world during the height of the pandemic, when so many were confined to quarters. The music of Schubert served that purpose for the composer, and the piece he wrote for the duo gave Davin and Levin a fine opportunity to reflect that itch in their expressive playing.

To end their set, Davin and Levin took the chill off Kulas Hall’s air conditioning with a sizzling version of Manuel de Falla’s Ritual Fire Dance.

END_OF_DOCUMENT_TOKEN_TO_BE_REPLACED

Rodgers & Hammerstein’s Cinderella was originally produced for television in 1957 — seven years after the animated Disney film was released — and starred Julie Andrews. According to the Rodgers & Hammerstein website, it was viewed by over 100 million people. END_OF_DOCUMENT_TOKEN_TO_BE_REPLACED

The story line has its origin in an 1855 play and an 1842 farce that Thornton Wilder mined for his 1938 play The Merchant of Yonkers. When that turned out to be a flop, in 1954 Wilder made the crucial decision to re-center the show around the character of the legendary marriage broker Dolly Gallagher Levi and renamed it The Matchmaker. END_OF_DOCUMENT_TOKEN_TO_BE_REPLACED

The Dodero Center for the Performing Arts at the Gilmore Academy in Gates Mills is one feature of an impressive campus. The auditorium is shallow, the stage is deep, and the ensemble played without a shell. Throughout the program, the sound, especially in instruments’ lower registers, tended to disappear. END_OF_DOCUMENT_TOKEN_TO_BE_REPLACED