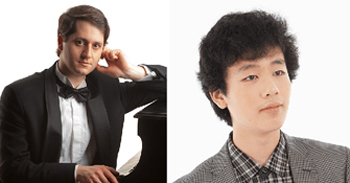 The semi-finals of The Cleveland International Piano Competition continued at 3:00 pm on Sunday, July 31 in Gartner Auditorium at the Cleveland Museum of Art, when a large audience was treated to polished performances by Nikita Mndoyants (27, Russia, left) and Yuanfan Yang (19, United Kingdom, right). In addition to being accomplished pianists, the two are also award-winning composers. They also each concluded their programs with the second of Prokofiev’s three “war sonatas.”

Nikita Mndoyants brought a beautiful sound full of colorful contrasts to the opening “Allegro” of Schubert’s Sonata No. 19 in c, D. 958. His sound palette ranged from the intimate to full-bodied, his technical passages clean and effortless. The “Adagio” was lyrical, and the “Minuetto: Allegro – Trio,” featured great character changes. The galloping rhythm of the concluding “Allegro” acquired a stylish sense of line as Mndoyants tossed off its many technical passages with ease.

Switching musical gears, the pianist gave a marvelous reading of Sergei Taneyev’s haunting Prelude and Fugue in g-sharp, Op. 29. The fast, syncopated fugue perfectly set the stage for Mndoyants’s thrilling performance of Prokofiev’s dissonant Sonata No. 7 in B-flat, Op. 83 (Stalingrad). The pianist was in total control during the opening “Allegro inquieto.” Playing with a big, rich sound, he made the most of every sudden shift in character from the short pointed staccatos to the long and lyrical. Following a beautifully sensitive “Andante caloroso,” Mndoyants offered up a thrilling roller-coaster ride during his explosive “Precipitata.” Setting a fast tempo which he maintained perfectly, Mndoyants hammered out the work’s repetitive triads with true pizazz, the recurring bass motive driving harder and harder until everything came to a pyrotechnic ending. The audience enthusiastically responded with a long ovation.

Yuanfan Yang began his superb program with an insightful performance of Schumann’s Carnaval, Op. 9, masterfully bringing each of the masked revelers to life during the work’s 21 short pieces. The opening Préambule was grand, and No. 7, Coquette, playfully depicted a flirtatious girl. No. 16, Valse allemande, was splendid, and Yang brought it all to a fine conclusion during Marche des “Davidsbündler.”

Yang brought a bouquet of colors and solid technique to his emotional performance of Liszt’s “Vallee d’Obermann” from Années de pèlerinage I, S. 160 which he followed with his own attractive work, The Haunted Bell (2012). While it is clear that he is inspired by the piano compositions of Ligeti and Boulez, the young composer has his own voice, and that came through loud and clear during his performance. Beginning with a single loud note followed by bell tones and lush chords in the high register, the piece evolves into a kaleidoscope of musical imagery. It also acted as the perfect prelude to his own stellar delivery of Prokofiev’s Sonata in B-flat, Op. 83 (“Stalingrad”).

Crisp, clear staccato’ that highlighted Prokofiev’s musical sarcasm defined the beginning of “Allegro inquieto.” Yang seized the opportunity to show off his lyrical side during the movement’s slow section. The sensitive musical arch he created during “Andante caloroso” was captivating. His take on the driving, repetitive “Precipitata” was pure rock and roll. He somehow managed to created huge dynamic shifts and a marvelous sense of line out of the cascades of notes with the ease that a formula one driver negotiates hairpin turns. Just when you thought his big focused sound couldn’t get any bigger, it did, bringing the performance and the session to a enthralling conclusion. Again, the audience showed their appreciation with a long ovation.

The cimbalom was the feature of the show, an instrument capable of taking on many personas. Its performer, Chester Englander, has shaped his career around the instrument, and has inspired composers to write more repertoire for it, some of which was presented on the program. END_OF_DOCUMENT_TOKEN_TO_BE_REPLACED

You wouldn’t expect that acoustic from a glance at the nave, which is wide and long, but not especially lofty. But when I guest conducted a local amateur choir and professional orchestra in Beethoven’s Mass in C there a few years back, during the first rehearsal we released the final chord of the “Gloria” and listened in astonishment for the next several seconds. The sound continued to roll down the space like the big wave that surfers dream about. END_OF_DOCUMENT_TOKEN_TO_BE_REPLACED