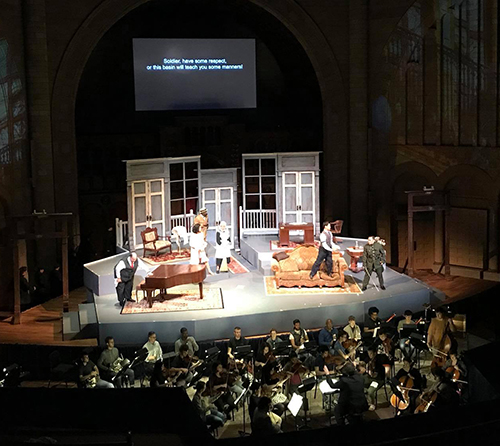 It’s hard to say whether the main character in Rossini’s The Barber of Seville is the scheming barber himself, or a member of the love triangle that drives the plot. It’s even more difficult when the four central roles are portrayed as memorably as they were on Saturday, October 6 in the performance by Cleveland Opera Theatre at the Maltz Performing Arts Center.

Baritone Young Kwang Yoo brought a cheshire cat grin, ultimate suavity, and a special combination of tone and power to Figaro. That barber does some hair-cutting, but seems to save most of his energy for being a sort of community “fixer” — and bringing in the healthy flow of cash that comes with it.

With a magnetic presence and vocal prowess, bass-baritone Jason Budd was a constant showstopper as the cranky, smug Don Bartolo. Competing with Bartolo for the affections of Rosina is another rich man: Count Almaviva. Tenor David Margulis sang that role with elegance and clear emotion, but was a little stiff onstage in the Count’s main disguise, the poor student Lindoro. The Count admittedly starts off a bit bland, but when things got more zany, Margulis came into his own. One highlight was his hilarious depiction of a drunk soldier, who insists on being quartered at Bartolo’s house so he can get close to Rosina.

A side note on stage drunkenness: some vocalists interpret it as just constant swaying and stumbling — that gets old. Silly and brash, in addition to taking some humorous tumbles, Margulis was a great (fake) drunk. 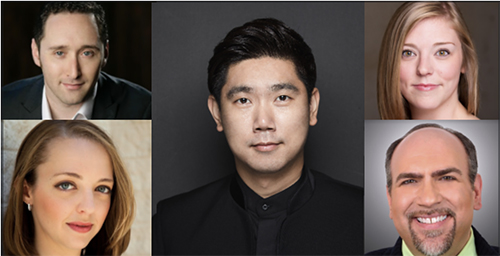 As Rosina, soprano Corrie Stallings sang with remarkable virtuosity and poignancy, and played up her character’s agency and bite. The most lasting image of the night came during Una voce poco fa, when she climbed atop the onstage piano and drew herself up to full height. “Lindoro will be mine, I’ve swore it, I’ll win,” she sings.

The next tier of plot-important characters includes Rosina’s music teacher Don Basilio and the maid Berta. Sporting a wide, pointy mustache, bass-baritone Frank Ward brought a comic stage presence to Basilio. Like Figaro, he’s a schemer, with dollar signs in his eyes. But while the Count actually listens to Figaro’s advice, Bartolo dismisses Basilio’s idea to smear the Count. (A bit of a harsh tactic, but better than basically bumbling around, as Bartolo does.)

As Berta, soprano Gillian Hollis sang with a lovely tone, and at one point clearly relished the opportunity to help Bartolo taunt Rosina. The chorus served the production well, adding humor as a group of musicians, and dramatically-blocked poses as the police.

Connecting seamlessly with the singers throughout the evening were conductor Domenico Boyagian and the Cleveland Opera Theater Orchestra. That’s not an easy task, so kudos to all those onstage, on the podium, and in the audience-level “pit” for their communication and teamwork.

Basilio’s wild mustache and Figaro’s pinstripe suit were just right in the costuming department, though other elements of the 1920s-influenced setting didn’t particularly stand out. And a couple of hectic visual effects — the side-to-side dances and spinning projections — went a little overboard, distracting from the already frenetic music.

A brilliant directorial touch from Scott Skiba was Figaro’s moments of “magic.” At one point the barber snapped his fingers, freezing time for all the other characters while he adjusted their arms as if they were puppets. At the end, he snapped his fingers again to cut the lights. If he’s not clearly the main character, then he’s at least the winking mastermind behind it all.

END_OF_DOCUMENT_TOKEN_TO_BE_REPLACED

The strings-only work by Berg has made relatively frequent appearances on the Orchestra’s programs. In 2021, the musicians recorded it for the In Focus series, and it appeared again on last year’s European tour. Friday’s rendition maintained the group’s characteristic light and effortless playing, each section blending as much as possible to echo the work’s original form as a string quartet. At fifteen minutes total, the piece is quite short, but the dense encoded musical meanings require some extra-attentive listening. Splitting up the three movements ensured that each one could be appreciated on its own. END_OF_DOCUMENT_TOKEN_TO_BE_REPLACED