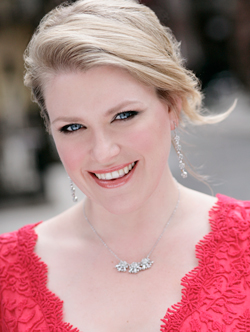 The Canadian soprano Erin Wall made only one costume change on Sunday evening at Blossom — from a burgundy to a sparkling black gown — but she brought winning vocal versatility and theatrical savvy to her portrayal of five different divas, brilliantly supported by Franz Welser-Möst and The Cleveland Orchestra.

“A Night at the Opera,” an engaging mix of well-known and lesser-known arias, overtures, dances, and interludes, gave Wall and the Orchestra abundant material to work with. Organized in pairs of selections by Mozart, Dvorak, and Richard Strauss in the first half, and interleaving arias between instrumental works from the Italian repertory by Rossini, Mascagni, and Verdi in the second, the program was an ideal choice for a perfect summer evening.

It’s not every singer who can shift gears from Donna Anna (Don Giovanni) to Rusalka, from Arabella to Violetta (La traviata), then to Desdemona (Otello) in a single program, but Wall imbued each of her characters with a different aspect of her radiant personality as well as with various colors from her alluring vocal palette. 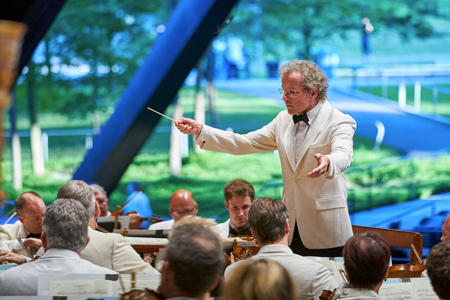 Standouts were the magical “Song to the Moon” from Rusalka, and the Verdi arias — “Sempre libera” from La traviata and the “Willow Song” and “Ave Maria” from Otello. Wall got a laugh in the first Verdi with her “I want to die of pleasure” line. Beginning with striking wind solos, the “Willow Song” ran the soprano and her character Desdemona through a whole gauntlet of emotions and eventually to a state of calm accompanied by wispy high strings. Projected supertitles allowed the audience to keep track of what was being sung without recourse to program books.

Welser-Möst is never so deeply engaged as when he leads operatic music, and conductor and Orchestra luxuriated both in their collaborative and solo moments. The Overture to The Magic Flute was noble and restrained, the Act II Polonaise from Russalka incandescent. “Travel Fever” and “Waltz Scene” from Intermezzo were transparent with all of Strauss’s orchestral multitasking exposed. The Overture to William Tell was distinguished by vibrant cello quartet and section playing, fine solos by English hornist Robert Walters and flutist Joshua Smith, and buoyant strings and stirring brass in the finale. The “Intermezzo” from Cavalleria rusticana was luminous, the Overture to La Forza del destino nervous and impassioned. 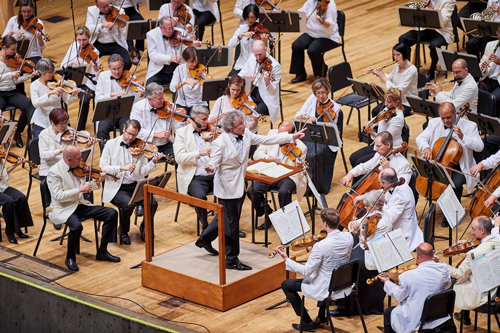 Eric Sellen’s program notes ended coyly: “Applause, applause, and…maybe something more? For what is a night at the opera without at least the possibility of a surprise!” That hint at an encore duly noted, Wall, Welser-Möst and the Orchestra sent the happy crowd away with a tiny but always delectable bon-bon — “Musetta’s Waltz” from La Bohème.

Speaking of surprises, which always abound during outdoor performances, the Blossom birds chirping away on the rafters of the pavilion added a delightful descant to the Mozart Overture — but where was Papageno? And toward the end of the first half, a rumbling and a crash turned many heads in the rear seats (a runaway cart took off down the lawn and struck the back wall, miraculously avoiding contact with any humans).

END_OF_DOCUMENT_TOKEN_TO_BE_REPLACED

Composer John Harbison has done it all. His numerous awards include a MacArthur Fellowship and a Pulitzer Prize. He has written works for many of America’s leading musical organizations and has served as composer in residence with the Pittsburgh Symphony and the Los Angeles Philharmonic. His catalogue includes three operas, seven symphonies, twelve concerti, a ballet, six string quartets, numerous chamber works, and a large body of sacred music. On her latest CD, Late Air — Music by John Harbison, soprano and Oberlin voice professor Kendra Colton reminds us that the celebrated composer has a special talent for writing art songs — she also proves herself to be a sensitive interpreter of them. END_OF_DOCUMENT_TOKEN_TO_BE_REPLACED

END_OF_DOCUMENT_TOKEN_TO_BE_REPLACED

We begin with the world premiere recording of Okeanos, Bernd Richard Deutsch’s concerto for organ and orchestra, featuring Paul Jacobs as soloist. The title refers not only to the Titan of Greek mythology, but also “to an idea of immense (and sometimes unfathomable) greatness and breadth, which conjures up in my mind the thought of the organ,” as Deutsch writes in his notes. END_OF_DOCUMENT_TOKEN_TO_BE_REPLACED