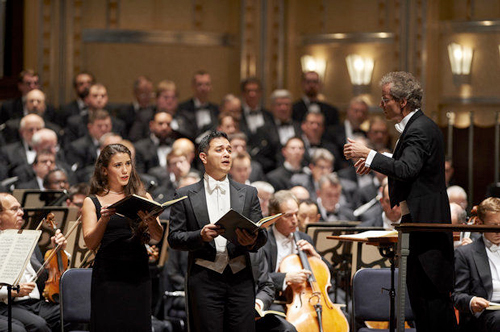 As Johann Sebastian Bach neared the end of his career, he took care to put his musical legacy in order, making archival-quality copies of Passions and completing what his son, C.P.E. Bach, called his “grosse catholische Messe.”

The Lutheran Cantor of Leipzig had no practical use for such a work, which he assembled from earlier compositions and finally fleshed out with newly-written movements. It was and is a stand-alone monument to his musical craft.

It was a splendidly-conceived and masterfully performed affair. The mass was presented straight through without a distracting intermission, and though long, Welser-Möst’s brisk but unhurried pacing brought the entire work in under two hours. Transitions between movements were managed with precision. The four sections into which Bach gathered the manuscript were clearly set apart by brief pauses, but everything else flowed seamlessly together into a wonderful musical tapestry. Even the chorus’s standing and sitting cues were integrated into the music rather than taking up time between sections. (Seated for the Crucifixus of the Symbolum Nicenum, after singing an exquisitely soft cadence, the chorus instantly surged to their feet for the Et resurrexit.)

Conducting expressively with bare hands, Welser-Möst summoned a vast range of dynamics and colors from singers and orchestra throughout the mass, which helped stave off sonic fatigue during such a long performance. The Cleveland Orchestra Chorus were chameleonic, singing gently but with well-supported tone in reflective moments, then going full bore when the music turned triumphant. In the tuttis, the chorus emulated the extraordinary ability of The Cleveland Orchestra to play loud but with transparency.

Soprano Joélle Harvey, countertenor Iestyn Davies, tenor Nicholas Phan and bass-baritone Hanno Müller-Brachmann never sang together as a quartet, but all were elegant, clear-voiced soloists whose voices rang out into the hall, and were perfectly matched in their duets.

In a brilliant final touch, the Cleveland Orchestra Youth Chorus suddenly filed in on either side of the dress circle to join the onstage singers in Dona nobis pacem — a moment of gentle, surround-sound that elevated an already transcendental moment.

For the record, the performance got off to an unlucky start when singers and orchestra parted ways early in the Kyrie. Welser-Möst did the right thing by calling a halt and beginning again. It happens to the best of us, and the moment was easily forgotten as wave upon magnificent wave of Bach poured forth from the Severance Hall stage. The near-capacity audience was ecstatic.

Joining a long list of arrangers, Parker Ramsay has now transcribed the Variations for the modern pedal harp, an instrument for which he holds a master’s degree from Juilliard, in addition to a degree in history from Cambridge University, plus a master’s in historical performance (organ and harpsichord) and an artist diploma (organ) from Oberlin. END_OF_DOCUMENT_TOKEN_TO_BE_REPLACED

As organizations gingerly take steps to open up for business, it’s refreshing to have new content to listen to and write about after a solid six months of archival footage. END_OF_DOCUMENT_TOKEN_TO_BE_REPLACED

END_OF_DOCUMENT_TOKEN_TO_BE_REPLACED

Over the past few years, Brian Giebler has visited Northeast Ohio in settings both orchestral and choral, and with repertoire as diverse as Stravinsky, Bach, and the local premiere of a new work. In his impressive solo recording debut a lad’s love, released on Bridge Records, the New York City-based tenor turns his focus to British songs from the first half of the 20th century — a mix of cycles and individual works — and tops off the playlist with a touch of the modern. END_OF_DOCUMENT_TOKEN_TO_BE_REPLACED

To steal a phrase from the third-century Greek philosopher Sextus Empiricus, the mills of the gods grind slowly, but they grind exceedingly fine. The same goes for Deutsche Grammophon. It’s been a dozen years since they were recorded in Hamburg in 2009, but the German company has now issued fifteen Rachmaninoff piano pieces magnificently and poetically played by Sergei Babayan. END_OF_DOCUMENT_TOKEN_TO_BE_REPLACED

END_OF_DOCUMENT_TOKEN_TO_BE_REPLACED

After considering all its options, Cleveland’s period ensemble Les Délices decided to fully embrace the idea of creating pre-recorded “shows” in the place of live, in-person performances this season. END_OF_DOCUMENT_TOKEN_TO_BE_REPLACED