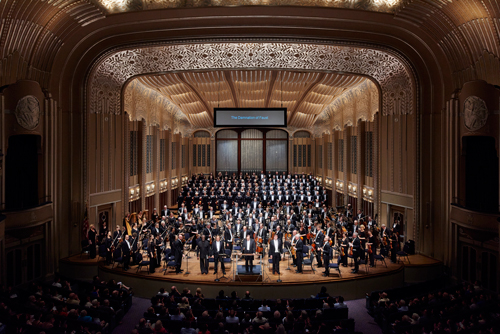 An elemental legend set to music by an imaginative composer, and performed by an exacting conductor, a first-class orchestra, a responsive, adaptable chorus, and four veteran soloists made The Cleveland Orchestra’s performance of Hector Berlioz’s La Damnation de Faust on Thursday evening, May 7 an unforgettable experience. May the houses for the two remaining concerts on Saturday evening and Sunday afternoon be packed to the rafters — a concert this gripping happens only once in a great while.

Berlioz’s fecund imagination, applied to the story of Dr. Faust, made everything possible. Re-arranging scenes from Goethe’s huge poetic play (and adding one) to suit his own dramatic ends, Berlioz conjured up through purely musical means the burgeoning of spring, marching soldiers and unruly university students, a frantic horse ride to the gates of hell where hideous demons snatched Faust away, and an ensuing scene of redemption in heaven where all was light and peace. 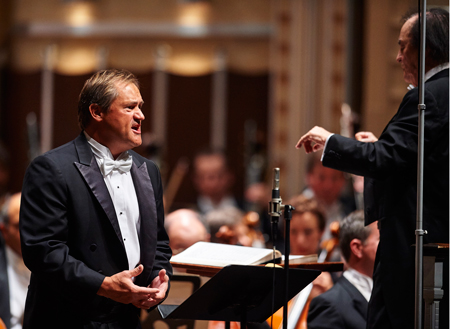 In the course of two hours and ten minutes (no intermission), Berlioz also served up a wonderfully varied menu of orchestral sounds and textures ranging from blazing brass climaxes to enthralling moments where unison violins were supported by flute and clarinet, or three flutes fluttered away over “Hosannas” in the chorus (that trio later took up piccolos to suggest will-o-the-wisps). Combined with the freshness of Berlioz’s themes and harmonies, the constantly shifting orchestration helped prevent any aural fatigue. 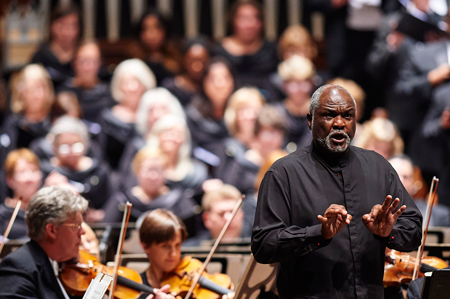 A more attractive group of soloists would be difficult to assemble. The veteran of over 200 performances of the role of Faust, tenor Paul Groves was in fine form, singing with handsome tone and projection. His rapport with the resonant bass, Sir Willard White, a particularly compelling Mephistopheles (whose appearances were announced by Berlioz’s musical version of a flash pot), bespoke a long history of performing together. While this was a concert performance rather than a semi-staged opera, the two exchanged enough meaningful glances and made just enough subtle gestures to suggest unseen details of the story. 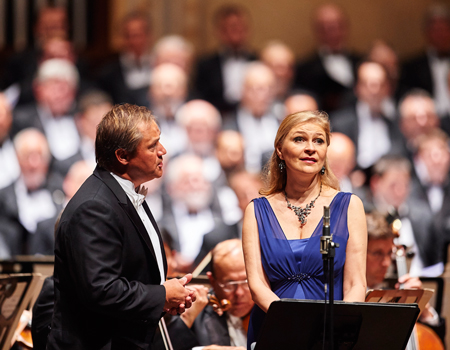 Paul Groves as Faust, with mezzo-soprano Ruxandra Dunose as Marguerite

The voluptuous tones of mezzo-soprano Ruxandra Donose adorned Marguerite’s arias and blended wonderfully with Groves in their dramatic duet. As Brander, Christopher Feigum made a fine moment out of his song about the lovesick rat in Auerbach’s tavern.

But, ah! The chorus! Thoroughly prepared as always by Robert Porco, the Cleveland Orchestra Chorus outdid themselves, singing in (often very quick) French, Latin, and whatever that diabolical tongue is that they use in the netherworld. They morphed from Hungarian peasants to drunken students (the men) to an Easter choir, a group of marching soldiers, a rabble of villagers, a horrification of demons and a beatitude of angels. Utterly splendid in all those roles, they brought the drama to an end — and Marguerite to redemption — in a soothing denouement, assisted by the youthful voices of the Cleveland Orchestra Children’s Choir. 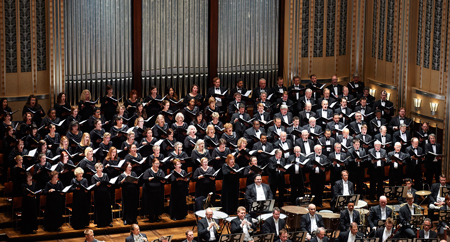 But, ah! Also the orchestra! Responding instantly to Charles Dutoit’s dramatic changes of tempo and affect, The Cleveland Orchestra moved the story along when it went forward, and settled in for evocative scene-painting when the motion let up. Some of the many striking details included wispy strings and reticent harps depicting “timid birds;” a haunting bassoon melody over pizzicato strings; offstage brass fanfares and onstage hunting horn calls; Robert Vernon’s expressive viola solo, joined by flutist Joshua Smith, and, later, Robert Walter’s liquescent English horn lines in Marguerite’s arias; and Frank Rosenwein’s alluring oboe solos in the “Morality Song” and during the ride to Hell. 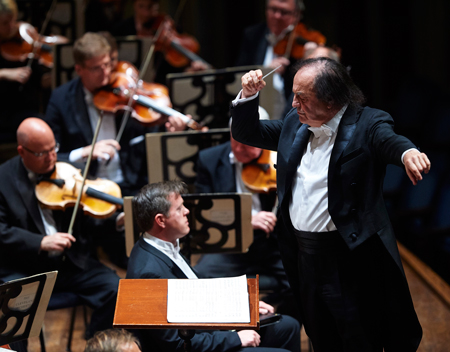 Dutoit, who knows the piece intimately, kept firm control of singers, chorus and orchestra over the whole course of the work. He knew what he wanted, and he knew how to achieve it. That level of knowledge and commitment is what made this performance of La Damnation of Faust so compelling.

But the soloists were equally engaged in thinking through their roles in the work. For one, Sir Willard White has deeply pondered the philosophical meaning of the Faust legend and its theme of human responsibility. Toward the end, when Faust blames the Devil for Marguerite’s ruin, White’s masterful delivery of Mephistopheles’ line, Ah! je suis le coupable! (So I’m to blame!), was almost a show-stopper. Yet another splendid element in a fine-textured reading of this remarkable work.

Published on ClevelandClassical.com May 8, 2015.

The cimbalom was the feature of the show, an instrument capable of taking on many personas. Its performer, Chester Englander, has shaped his career around the instrument, and has inspired composers to write more repertoire for it, some of which was presented on the program. END_OF_DOCUMENT_TOKEN_TO_BE_REPLACED

You wouldn’t expect that acoustic from a glance at the nave, which is wide and long, but not especially lofty. But when I guest conducted a local amateur choir and professional orchestra in Beethoven’s Mass in C there a few years back, during the first rehearsal we released the final chord of the “Gloria” and listened in astonishment for the next several seconds. The sound continued to roll down the space like the big wave that surfers dream about. END_OF_DOCUMENT_TOKEN_TO_BE_REPLACED