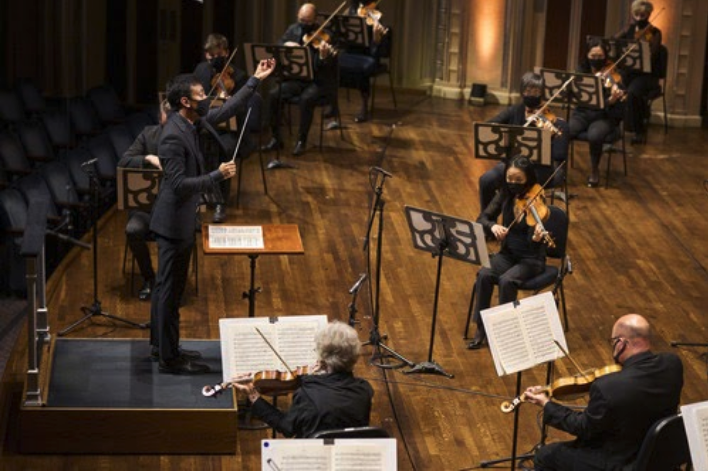 The video captures a moment when the live concert world was still on hiatus, and face masks were more than merely de rigueur. Though we have moved on from that point in several ways, it’s good to have a reminder that the pandemic will remain with us for some time into the future, and that we’re not through with pondering mortality and creating memorials quite yet.

“Celestial Serenades” begins with a new Kernis work performed by the Orchestra’s principal trumpet, Michael Sachs, and his wife, concert harpist Yolanda Kondonassis, who inspired it after hearing Kernis’ solo piano piece, Elegy…for those we lost and convinced the composer to make an arrangement for trumpet and harp.

The result is both a new entry in the catalogue of music for harp plus solo wind instrument and a moving testament to those who have not survived to hear it. In the shape of its melody and its spiritual content, the piece bears a resemblance to another famous elegy, Elgar’s Nimrod, but only by way of tribute. Moving from the meditative to the quasi-triumphant, the piece ends as quietly as it began. The performance, preceded by heartfelt comments by the musicians, is sensitive and flawless. 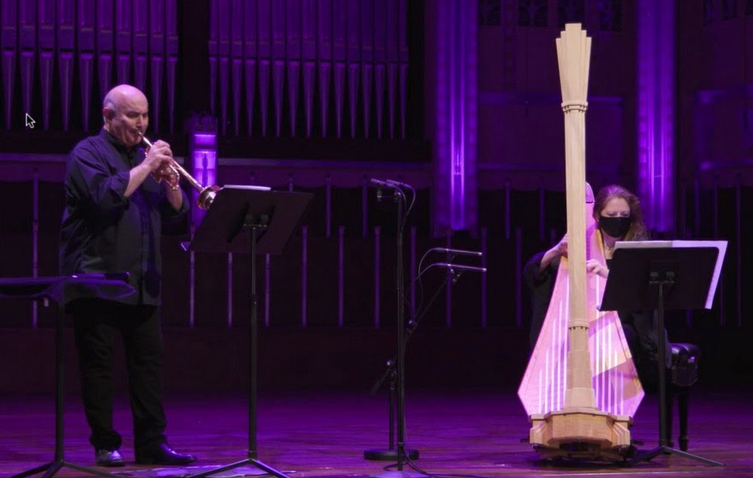 Another Kernis work has been around for a while. His 1990 Musica Celesta for string orchestra sprang from the faddish popularity of the music of the 12th century German Abbess and medieval polymath Hildegard von Bingen. In the video, Kernis explains his attempt to create a sense of floating clouds of sound without any sense of direction or arrival.

Vinay Parameswaren leads a beautifully paced account of the work, which grew out of the slow movement of Kernis’ First String Quartet, distinguished by various solos and remarkable for the suppression of vibrato, which makes otherwise rich textures seem otherworldly.

By way of contrast, Suk’s Op. 6 Serenade for Strings is a delightful, romantically-tinged work very much of this world. After what has gone before, its carefree, Dvořákian ebullience is cathartic and welcome. Parameswaren and his colleagues give it a robust and committed performance.

Orchestra photo by Roger Mastroianni courtesy of The Cleveland Orchestra.

Jackson began the program with a recitation of Langston Hughes’ poem “Helen Keller” — the first of five poems by Hughes that served as interludes between each piece on the first half. END_OF_DOCUMENT_TOKEN_TO_BE_REPLACED

Pianos with pins and tape on strings, a bass drum and tam tam, crotales, Almglocken, and vibes. Microphones were hooked up all around the instruments. The feed was sent to speakers around the room. Lighting designer Nicholas Houfek hung incandescent globes over the arrangement of instruments from thin black wires stretching across the beams. END_OF_DOCUMENT_TOKEN_TO_BE_REPLACED

From the podium, Elim Chan set an ambitious tone for the evening. The rising star conductor, here in her Cleveland Orchestra debut, has a commanding style, and every twist and turn in Saturday’s performance tracked closely with her baton. END_OF_DOCUMENT_TOKEN_TO_BE_REPLACED