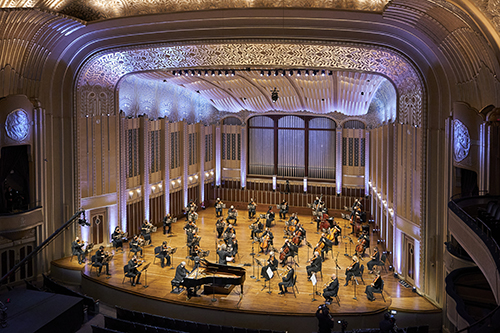 The Severance Hall team made just a few tweaks to the video production of Episode 2 in its In Focus Series that debuted on October 29. Instead of the colorful lighting that gave a bluish tint to Respighi and bathed Tchaikovsky in red for Episode 1, the walls of the stage were washed in a subtle peach hue. And instead of standing for a silent ovation from an empty hall, players remained in their seats for a fadeout at the end of both works on the program. What remained the same was the high level of playing from the well-distanced string section, and the superb quality of the sound.

Pianist Yefim Bronfman, who sat for an informal interview before joining Franz Welser-Möst and the Orchestra for Alfred Schnittke’s Concerto for Piano and String Orchestra, noted that the pandemic gave him the opportunity to learn the 1979 work, which he described as a collage of styles masterfully put together. He said there was loneliness and darkness, but also an element of hope in the music.

It’s a fascinating piece that jerks the listener in multiple directions and sometimes layers different material in a Charles Ivesian manner. Beginning with doorbell-like gestures from the soloist — a descending minor third that inverts itself and changes from minor to major — the mood changes as suddenly as Northeast Ohio weather as the pianist introduces noisome clusters and the strings import a chordal anthem from another tonal world.

A lulling passage leads to a frantic “catch me if you can” chase initiated by the piano, ending with more noble chords from the strings.

A jazzy little interlude finds the pianist’s right hand melody engaging in a conversation with solo double bass before unisons in the piano build to a noisy climax, and a cutoff leaves the piano strings ringing into silence. Repetitive melodic gestures develop into what sounds like a parody of “The Great Gate of Kiev” but with a major-minor disagreement between soloist and orchestra.

What else can happen? More clusters from the pianist. A lower string section elegy. A persistent, repeated-note theme from the piano, then a palindromic return to the material heard at the beginning of the piece. A great rush upwards on the keyboard leaves the soloist playing a simple tune and single high notes to end.

Bronfman’s playing was both efficient and thrilling, and his mood changes chameleon like. 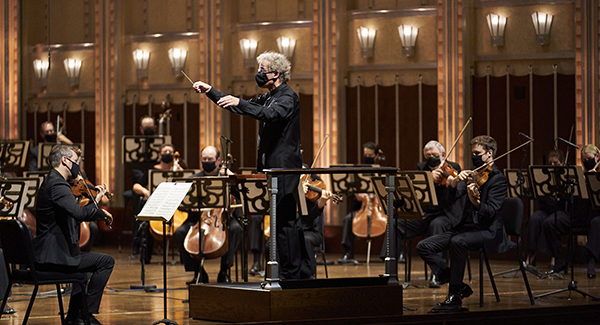 The second work on the hour-long program was a full string orchestra version of Beethoven’s Op. 74 “Harp” Quartet, given extra weight by the addition of double basses. It’s likely that every member of the Orchestra has played the work in its original form, but that doesn’t make it any easier to coordinate details with multiple players on a part, especially when seated so far apart. The ensemble was quite amazing.

Welser-Möst introduced the Beethoven, noting that he was proud of the chamber music-like playing of The Cleveland Orchestra, and adding that Op. 74 was playful, profoundly philosophical, and full of joy. Even with so many extra hands on the fingerboards, those qualities came through with engaging clarity.

Northeast Ohio’s Les Délices has long been that rarest of beasts: a world-class organization so proud of its region (ours) and repertoire (distinct niches in pre-1800 music) that it never tries to be everything to everyone, paradoxically making a strong case for a broad, curious international following. In the December episode of its SalonEra series, the ensemble embraces its strengths and community to marvelous effect. END_OF_DOCUMENT_TOKEN_TO_BE_REPLACED

END_OF_DOCUMENT_TOKEN_TO_BE_REPLACED

Another I remember fondly is Gian Carlo Menotti’s Amahl and the Night Visitors.  Commissioned by NBC, the one act, made-for-television opera, premiered on December 24, 1951, at the network’s studios in New York’s Rockefeller Center. And now, through the wonders of technology, Cleveland Opera Theater has created a magical new production of the work which is available on demand through January 6, 2021 (Three Kings Day). END_OF_DOCUMENT_TOKEN_TO_BE_REPLACED

Jessen has now followed up with her second solo CD, Winter Chapel. Recorded on January 17, 2020 in Oberlin College’s Fairchild Chapel and available on Carrier Records, the album is a continuum in Jessen’s journey to push the musical boundaries of her instrument and herself as an improviser. END_OF_DOCUMENT_TOKEN_TO_BE_REPLACED