Episode 5 is subtitled “Musical Patterns,” a nod to the fact that three of the four works are examples of “minimalism,” or maybe more precisely, “repetitive music.” “Minimalism” suggests the system that Marie Kondo would like to impose on your wardrobe, while what we’re talking about here is the kind of propulsive, machine-like music with slow-moving changes in layers and textures that most listeners first encountered in Philip Glass’s film scores.

This concert began with the opening of Glass’s Glassworks in an arrangement by Christian Badzura. A simple piano line introduced by Marc-André Hamelin was soon joined by the low strings, who set out a harmonic groove, then by the upper strings who entered with their own rhythmic and harmonic pattern. Lyrical moments alternated with motoric sections, and just about at the point when repetitions became hypnotic, the movement faded away.

This style of writing looks simple enough to play, until you try it and realize that maintaining repetitive patterns is difficult work — the more so if you’re operating under social distancing protocols and have to precisely line events up with colleagues on the other side of the stage. As expert at ensemble playing as Cleveland Orchestra musicians are, some tiny splattering of attacks happened from time to time between piano notes and string pizzicatos. 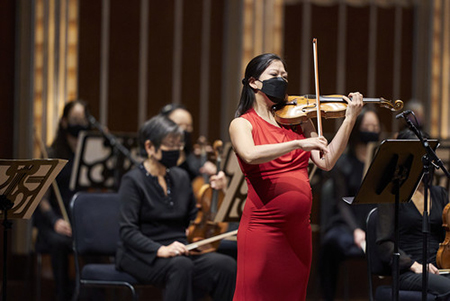 Associate Concertmaster Jung-Min Amy Lee was featured in Arvo Pärt’s 1977 Fratres, a three-voice set of variations on a six-bar theme that engenders both frantic activity and the stillness of eternity. It comes without a fixed orchestration, so the original work has been performed by such combinations as chamber orchestra, a choir of four, eight, or twelve cellos, string quartet, an octet of winds and percussion, string orchestra with percussion (the version used here), a band of metal instruments, or an early music contingent of three recorders, percussion, and cello or viola da gamba.

Lee promised in her prefatory remarks that the piece would be “powerful and deeply moving,” and so it was. Her striking violin ostinato opened the piece and grew more and more intense, welcoming other players into the mix. As the work progressed, its momentum was  interrupted at the end of each six-bar section by a ritualistic percussion statement: Marc Damoulakis, playing bass drum with one hand, wood block with the other. The last time around, upper strings played high harmonics almost at the threshold of audibility. 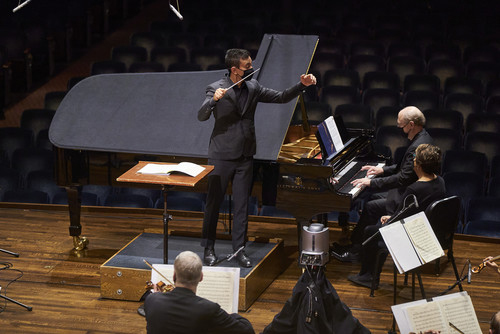 J.S. Bach’s Keyboard Concerto No. 5 in f brought Hamelin back to the stage for a delightful work for piano and strings that seemed to be an outlier in the “Patterns’ program. Hamelin described the short concerto as a “tasty morsel” with a “most beautiful” slow movement — one that Bach also used as the Sinfonia of his Cantata BWV 156.

John Adams’ Shaker Loops, the main work and the one truest to the “Musical Patterns” idea came last on the program. Speaking via video from his studio in Berkeley, California, Adams said the piece, which passed through a long series of evolutions, most clearly embraced the minimalist movement as represented in the works of Glass, Reich, and other composers of the 1970s.

Adams also noted that the title has nothing directly to do with the religious sect who earned their nickname from their erratic, ritual dance movements. The opening and closing movements, “Shaking and trembling” and “A Final Shaking” refer to shaking bows on the strings and playing the tremolos and trills that energize the piece. And as for the concept of “Minimalism,” Adams said he always wants “to rattle its cage” to make the music less mechanical and “more dramatic, expressive, and explosive.”

The Cleveland Orchestra gave Shaker Loops a strong, tireless performance that also featured moments of great beauty. We often compare the precision of this ensemble’s playing to that of a well-oiled machine, but here Parameswaren and the musicians added warm, human elements as well.