The first of two festivals capping off The Cleveland Orchestra’s centennial season was based around Richard Wagner’s groundbreaking version of the Tristan and Isolde legend. Culminating on April 29 with the third performance of his four-hour-long opera (Wagner called it “eine Handlung”), the festival also included a performance of Messiaen’s transcendent Turangalîla- Symphonie, and a concert titled “Divine Ecstasy,” a gathering of works that translate the notion of love-intoxication into the spiritual realm.

The mini-series owes its philosophical underpinning to music director Franz Welser-Möst, who has written in a program book article that once Tristan and Isolde was logged into the 100th Anniversary calendar — a longtime dream of his — he became excited to contemplate other music that embraces religious or personal ecstasy. “I think for many people, musical performances are often a channel to understanding and transcendence, of being more than yourself and at peace. And so I worked to develop a festival around the opera.”

The Orchestra gave a single, electrifying performance of Messiaen’s ten-movement symphonic treatise on ecstatic, transforming love on Wednesday evening, April 25. Written immediately after the Second World War, the piece takes its name from Hindu words that ring changes on the concepts of “game” or “play,” “love,” and “the passage of time,” and its inspiration from the Tristan and Isolde legend that Messiaen was studying at the time.

This fascinating double concerto for piano and ondes martenot — an early electronic instrument invented by Maurice Martenot in 1928 — superimposed the flawless virtuosity of Jean-Yves Thibaudet and Cynthia Millar on a palette of dazzling, transparent sounds Welser-Möst drew from the large orchestra. The expanded percussion section ratcheted up the excitement with ebullient mallet work, bells, and chimes. 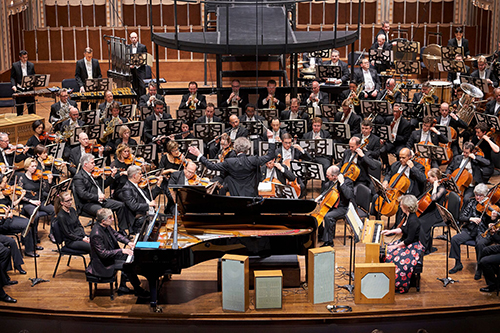 Messiaen’s music is as approachable and infectious as it is complex and completely original. Nothing sounds quite like it, but it always bears the unmistakable fingerprint of the composer, who had the uncanny ability to transform potentially kitschy themes and chord progressions into elements of sophistication and beauty.

Millar’s ondes martenot sang mysteriously with the strings, added a strange new timbre to other instrumental combinations, and emitted a particularly euphoric upward wail just before the end of the work.

Judging both from the delirious ovation and animated audience chatter in the hallways afterward, Turangalîla was not only a standout in this festival, but in the entire Cleveland Orchestra season.

Franz Welser-Möst introduced the second concert on Saturday, April 28, with an engaging chat about the evening’s program of transportive religious music, mostly from the Western Christian tradition. He asked that the audience hold applause until the end of the first half, so as not to interrupt the contemplative mood.

In the second half, Welser-Möst led the expressive countertenor Iestyn Davies and a small orchestra in J.S. Bach’s cantata Vergnügte Ruh with a sparkling organ obbligato by Paul Jacobs. Jeffrey Rathbun sat amid the violins, perfectly blending his oboe d’amore with their ornate lines.

Earlier, Jacobs had contributed Andrea Gabrieli’s Fantasia Allegra to the Venetian set. He finished off the evening with perhaps the most lucid reading you’ll ever hear of Franz Liszt’s Fantasy and Fugue on the Huguenot chorale “Ad nos, ad salutarem undam” from Giacomo Meyerbeer’s opera Le prophète.

Masterfully mixing the registers of the E.M. Skinner organ and making subtle stop changes as the piece went on, Jacobs finally shifted into overdrive, and flicking a fingernail across the organ’s row of coupler tabs to command its full power, brought Liszt’s fantasy to an exultant conclusion.

In response to a rousing ovation, Jacobs sent the audience — ecstatic themselves by now — into the night with a witty, spirited encore: J.S. Bach’s D-Major Fugue, in which he played with echoes and deliciously extended rests. The piece ended with an impressive pedal solo.

On Sunday afternoon, April 29, a capacity audience settled into Severance Hall for the main event of the Ecstasy festival — a concert performance of Wagner’s four-hour-long Tristan und Isolde, sung in German by a distinguished cast headed up by soprano Nina Stemme and tenor Gerhard Siegel. 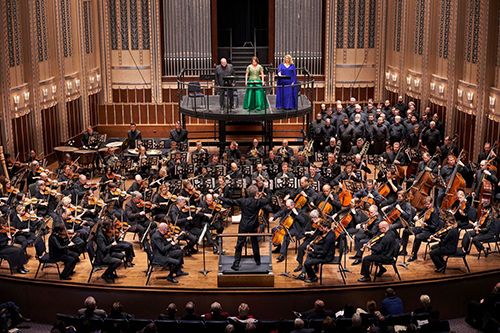 The stage served as the orchestra pit, while the singers performed from an elevated platform, making their entrances and exits through the center panel of the organ façade (pipes removed).

With the cast in concert dress, no scenery, no props, and only chairs and music stands for furniture, this Tristan performance resembled a Sitzprobe — that intermediate phase in opera production where the whole focus is on the music — except for some minimal, seemingly improvised acting.

Minus theatrical distractions, Welser-Möst and the Orchestra were free to put Wagner’s musical innovations across in bold relief, beginning with the famous opening gesture that resolves one unstable chord by moving into another — the seed of an idea which permeates the entire opera and acts as metaphor for yearning and desire.

Unconfined to a pit, The Cleveland Orchestra could be heard in all of its tonal glory during a score that scarcely stops to breathe, and most of the lead singers had the physical wherewithal to project over the loudest orchestral tuttis.

Soprano Nina Stemme brought alluring power to the role of Isolde. Tenor Gerhard Siegel was a stentorian Tristan, indefatigable even in the daunting third act — although pitch sometimes sagged in his middle register. 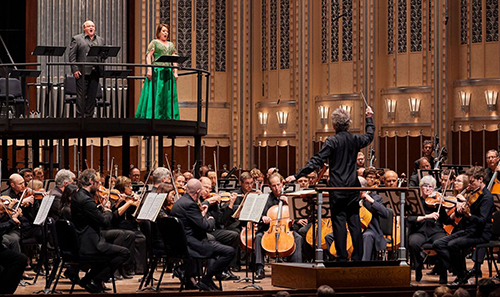 Mostly unseen, the men of the Cleveland Orchestra Chorus brought sailors, knights, attendants, and soldiers to life, coming onstage to join brass — stationed in the dress circle — for a thrilling surround-sound effect at the end of Act 1. Later, in Act 3, superbly played offstage solos by English horn (guest Russ deLuna) and trumpet (Michael Sachs) brought a bit of theatricality to the proceedings.

Welser-Möst and the Orchestra proved to be musical marathoners on Sunday afternoon, still generating energy at the end of this lengthy show — probably well beyond the point when listeners’ ears began to fatigue. But like challenging foot races, Tristan and Isolde isn’t an everyday experience. This was a priceless opportunity to experience the piece under optimal musical circumstances.

The cimbalom was the feature of the show, an instrument capable of taking on many personas. Its performer, Chester Englander, has shaped his career around the instrument, and has inspired composers to write more repertoire for it, some of which was presented on the program. END_OF_DOCUMENT_TOKEN_TO_BE_REPLACED

You wouldn’t expect that acoustic from a glance at the nave, which is wide and long, but not especially lofty. But when I guest conducted a local amateur choir and professional orchestra in Beethoven’s Mass in C there a few years back, during the first rehearsal we released the final chord of the “Gloria” and listened in astonishment for the next several seconds. The sound continued to roll down the space like the big wave that surfers dream about. END_OF_DOCUMENT_TOKEN_TO_BE_REPLACED