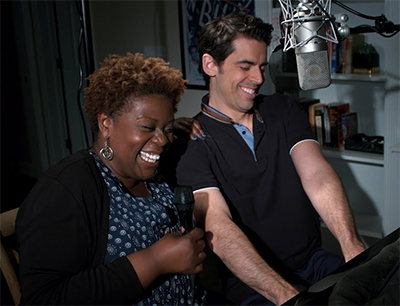 The vocalists harmonized beautifully on Steve Allen’s This Could be the Start of Something Big. Fleischer and the Orchestra provided sensitive accompaniment here and all evening.

Their duet on the Fain/Kahal hit I’ll be Seeing You (In All the Old Familiar Places) sparkled. When Jenkins entered, DeSare accompanied unobtrusively, later presenting a virtuosic solo. They gracefully harmonized the final verse until Jenkins shot to the high register with a closing flourish.

The two soloists gave Cole Porter’s Night and Day a bright, up-tempo performance with lustrous harmony. Their duet on Ray Charles’ Hallelujah, I Love Her So was a delight, enhanced by an expressive alto sax solo.

Mercer’s Something’s Gotta Give began with Jenkins, soon followed by DeSare’s lightning-fast piano solo. The two shared a stunning duet on Rodgers & Hart’s The Lady Is a Tramp.

Both soloists performed a kaleidoscopic Great American Songbook medley, including Gershwin’s lyrical They Can’t Take That Away from Me and Our Love Is Here to Stay, and Henry Mancini’s enduring Moon River. They segued to Hamilton’s How High the Moon. Bart Howard’s Fly Me to the Moon and the Kay/Gordon rhythm and blues song That’s Life were entrancing. 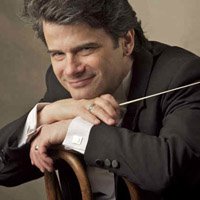 Jenkins’ rendition of Jerome Kern’s All the Things You Are displayed velvety timbre. Gershwin’s Fascinating Rhythm had the grace of a slow ballad. Laura, by film composer David Raksin, took on a special glow, enhanced by a muted trumpet solo. Malneck/Mercer’s Goody, Goody and Ella’s own A Tisket, A Tasket — both peppy novelty songs — gleamed, as did Harold Arlen’s Get Happy.

The rhythm section supported DeSare in Bloom/Mercer’s Day In, Day Out. Styne/Comden’s Just in Time scintillated in lively exchanges between vocalists and guitarist. A shimmering glockenspiel added color to Paul Anka’s My Way.

Fleischer and the Orchestra performed Glenn Miller’s intense In the Mood and Louis Prima’s Sing, Sing, Sing with exceptional sax and woodwind support, and Porter’s Begin the Beguine with beautiful decorative percussion.

The duo’s final love-song medley included the Arlen favorite I’ve Got the World on a String, Porter’s I’ve Got You Under My Skin and They Can’t Take that Away from Me, and Heinz Meier’s Summer Wind. The sprightly encore, Arlen’s Let’s Fall in Love, received a standing ovation.