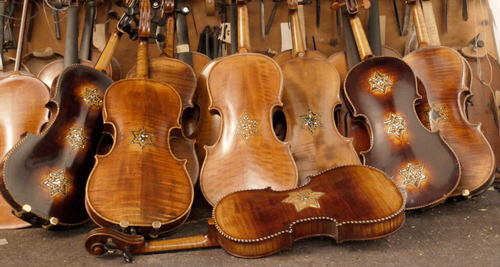 Among the more important activities during the four-month Violins of Hope Cleveland project are the extensive educational activities being offered to schools and students by a number of area institutions. On Wednesday, Thursday, and Friday (December 2 – 4) at 10:10 am and 12:10 noon, associate conductor Brett Mitchell and The Cleveland Orchestra — in conjunction with graduate students from the Case Western Reserve University / Cleveland Play House MFA Program in Acting — presented six engaging, hour-long concerts that unflinchingly presented the events of the Holocaust in music, mime, and words.

ClevelandClassical.com attended the noon concert on December 3, which began with Gerald Finzi’s powerful and elegiac Prelude for String Orchestra. After a spoken introduction and then during Sergei Prokofiev’s Overture on Hebrew Themes, the actors created tableaux suggesting important events of Jewish life in the ghettos of Europe — Sabbaths, weddings, births, Bar Mitzvahs, funerals.

Then, coming to the lip of the stage bearing suitcases, they narrated the story of the Nazis’ final solution to the “Jewish Problem” before the orchestra played the unsettling second movement of Dmitri Shostakovich’s Chamber Symphony and violinist Peter Otto intoned the main theme from John Williams’s Schindler’s List.

The Resistance to the Nazis was told through the narrative of teenaged violinist Mordechai Shlayan, who was befriended by the local SS and played at their hotel — all the while using his fiddle case to smuggle explosives into the building every night, eventually blowing it up.

Liberation and the end of the war were celebrated with Ernest Bloch’s “Simchas Torah” from Baal Shem, its violin solo ebulliently played by Peter Otto. Tales of survivors and their achievements were matched up with Max Bruch’s Kol Nidrei, affectingly played by cellist Charles Bernard. Both Otto and Bernard used instruments that survived the Holocaust and have been restored by Violins of Hope founder Amnon Weinstein.

It was completely evident in its playing on Thursday that The Cleveland Orchestra puts as much care into its school performances as it does into its subscription series and international tours. This well-designed, expertly acted, and excellently played concert was informative and held its audience in rapt attention without the need for video or any other technological gimmicks. Human voices and instruments in the hands of dedicated musicians were all that were needed.

END_OF_DOCUMENT_TOKEN_TO_BE_REPLACED

Supported by engagingly, yet simple staging by Cara Consilvio, a well-prepared cast of singers told the archetypal story of Cinderella with charm and flair. Framing the production was  a sparse but colorful set and wonderful lighting by Dave Brooks. END_OF_DOCUMENT_TOKEN_TO_BE_REPLACED