The Cleveland Orchestra’s second performance of the new season on Sunday afternoon, October 17 at the newly renamed Mandel Hall at Severance Music Center was just such an occasion. If the ensemble’s return to public concerts under the baton of Franz Welser-Möst wasn’t enough reason to light a bonfire, the Cleveland debut of a new work written for one of the Orchestra’s most popular soloists, and the swan song of one of its longest-serving members added extra fuel to the celebration.

Taking those items in reverse order, the afternoon ended with Prokofiev’s Fifth Symphony, a work with a bravura piano part magnificently played by Joela Jones, who was retiring on Sunday after 54 years on the piano, organ, and harpsichord benches, including occasional cameos as an accordionist.

The middle item was A New Day, a cello concerto by octogenarian composer Joan Tower dedicated to and performed by the inimitable Alisa Weilerstein, who will also have performed it this season with its co-commissioners, The Colorado Music Festival and the Detroit and National Symphony Orchestras. 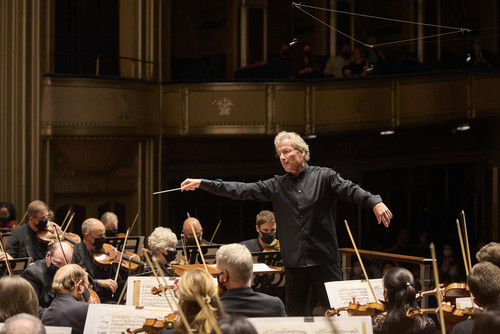 And the opening slot was reserved for the Orchestra itself, who played the rarely performed Strauss tone poem Macbeth, filling the hall with thrilling sounds we haven’t enjoyed since the ensemble went into quarantine after an emotional, semi-private performance of Schubert’s Ninth Symphony in March of 2020. Never mind that the piece itself sounds something like Don Juan chopped up and re-assembled. The sheer volume and sound colors were thrilling, and the playing so accomplished and flawless that it seemed as though the Orchestra had never gone on an 18-month hiatus.

The Tower concerto was tailor-made to Alisa Weilerstein’s many strengths as a soloist, including her ability to make herself heard through complex orchestral textures even in the most difficult range of her instrument. 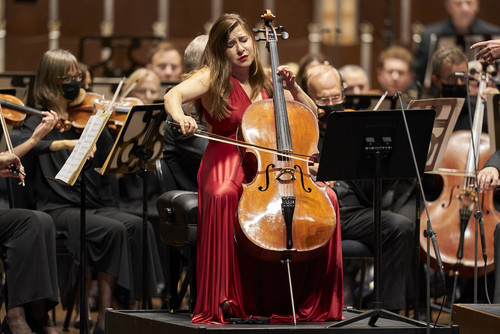 Tower, who was present for the performance, knows her way around an orchestra score, and has crafted a work in which soloist and orchestra conduct meaningful conversations on a variety of subjects. Those are mostly mundane, for the whole piece is loosely related to the everyday events and thoughts that organize our lives, treated in four movements: Daybreak,Working Out, Mostly Alone, and Into the Night. The concerto also draws inspiration from Tower’s long-time relationship with her 94-year-old husband and the realization that there might not be many of those new days left. 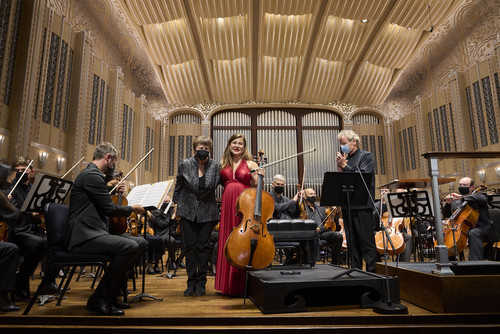 If the opening Strauss tone poem had enjoyed some loud moments, parts of Prokofiev 5 reset all ears in the hall. The richly-hued, deliciously melodic, and rhythmically vital work might, like the Third and Fourth Symphonies, be the reworking of an abandoned ballet score, but the composer is perfectly capable of crafting evocative symphonic narratives without visions of dancers in mind. 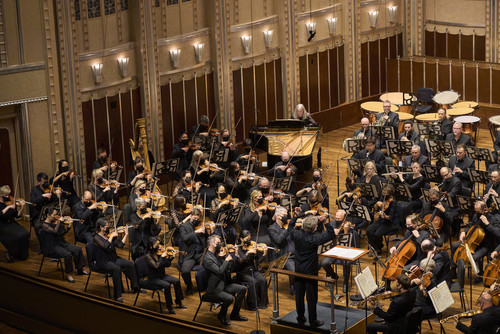 The Cleveland Orchestra outdid itself dramatically, goaded on by Welser-Möst, who can whip the proceedings up to a frenzy — and did. The percussion section was an important factor there, and snare drum guru Marc Damoulakis enlivened moments in the Prokofiev just as he and his colleagues had earlier on heralded the arrival of characters in Macbeth. And in her last appearance with the Orchestra, pianist Joela Jones pointed up important accents and rhythmic highlights while remaining part of the ensemble. 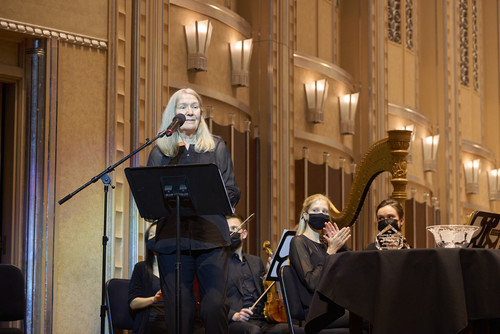 Jones, who was presented with the Orchestra’s Distinguished Service Award at the Thursday evening performance of this program, received a long, thunderous ovation and many hugs from colleagues on Sunday when Welser-Möst brought her out to the lip of the stage after giving her a standup — an emotional moment that capped off an electrifying concert, and for Jones, a distinguished career at Severance’s many keyboards.