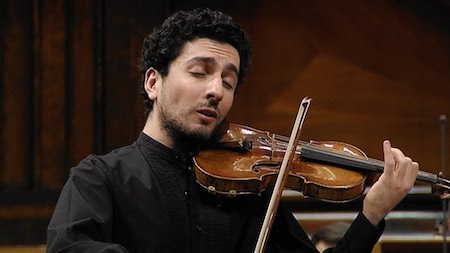 Armenian violinist Sergey Khachatryan brought not only his calm yet thrilling virtuosity to the Brahms concerto but also a storied instrument to play it on: the 1740 Guarneri violin that Eugene Ysaÿe called “the faithful companion of my life,” an instrument that was also once owned by Charles Munch and Isaac Stern. In his compelling performance, Khachatryan proved that the violin still had new stories to tell.

Guest conductor Jakub Hrůša set up a suspenseful, slowly unfolding introduction to the first movement. Khachatryan responded with a similarly unhurried exposition of the solo part, playing sweetly and tenderly and creating a lovely dialogue with the Orchestra’s violins. Grand tuttis provided a fine contrast, and the violinist’s playful, introspective cadenza led to an exquisite denouement before a bravura ending.

The Orchestra’s wind section sounded superb in the Adagio, supporting both Jeffrey Rathbun’s elegant oboe solo and William Preucil’s violin solo, which emerged magically from within the wind band. Although such virtuosi as Pablo de Sarasate bristled at the thought of standing silent during that introduction, Khachatryan seemed to welcome the opportunity to luxuriate in the moment.

Gently paced by Hrůša and fastidiously played by Khachatryan, the finale turned into an infectious gigue when the meter changed to 6/8. The audience reacted to this unusually penetrating performance with an instant standing ovation, and the violinist responded charmingly with an Armenian traditional song remarkable for its double-stops in parallel fourths.

Only Karel Ančerl, in 1971, and Libor Pešek, in 1992, had previously led The Cleveland Orchestra in Joseph Suk’s Asrael Symphony. The work is named after the Angel of Death in Abrahamic religious traditions — who had cut down both the composer’s father-in-law, Antonín Dvořák, and his wife, Dvořák’s daughter, while Suk was writing the piece. On Thursday, Jakub Hrůša brought his view of the sprawling, five-movement symphony to Severance Hall, demonstrating both its allure and its prolixity.

Conducting from memory, Hrůša drew bold, colorful playing from the ensemble, clearly emphasizing its striking, four-bar “Asrael” theme every time it appeared — which was frequently. The volatile Scherzo provides several varieties of contrast to the two movements that preceded and followed it, but the hour-long symphony, for all its orchestrational brilliance, began to fatigue the ear three-quarters of the way through. The Orchestra gave it a plush, committed performance, and Hrůša acknowledged multiple soloists and sections that had made distinguished contributions.

END_OF_DOCUMENT_TOKEN_TO_BE_REPLACED

Rodgers & Hammerstein’s Cinderella was originally produced for television in 1957 — seven years after the animated Disney film was released — and starred Julie Andrews. According to the Rodgers & Hammerstein website, it was viewed by over 100 million people. END_OF_DOCUMENT_TOKEN_TO_BE_REPLACED

The story line has its origin in an 1855 play and an 1842 farce that Thornton Wilder mined for his 1938 play The Merchant of Yonkers. When that turned out to be a flop, in 1954 Wilder made the crucial decision to re-center the show around the character of the legendary marriage broker Dolly Gallagher Levi and renamed it The Matchmaker. END_OF_DOCUMENT_TOKEN_TO_BE_REPLACED

The Dodero Center for the Performing Arts at the Gilmore Academy in Gates Mills is one feature of an impressive campus. The auditorium is shallow, the stage is deep, and the ensemble played without a shell. Throughout the program, the sound, especially in instruments’ lower registers, tended to disappear. END_OF_DOCUMENT_TOKEN_TO_BE_REPLACED