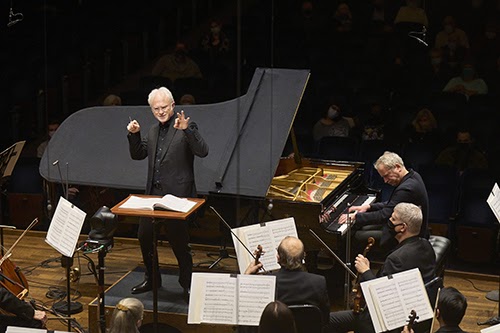 The Cleveland Orchestra transformed into the Los Angeles Philharmonic over the weekend. Even if a snowstorm outside suggested otherwise, the program on February 4 at Severance Music Center had the California spirit of experimentation at all costs. The Orchestra had postponed the performance by a day, and lingering bad weather plus the new date meant Friday’s sparse crowd was the committed, brave-it-out type.

The concert embraced more than just a general innovative attitude, though. Composer John Adams led the Cleveland musicians in a distinctive all-contemporary bill, in the model of the “Green Umbrella” series he chairs for the LA Phil.

The focus on new music and living composers is part of a larger project, Adams explained from the podium. Building a core symphonic repertoire that’s uniquely American, starting with Charles Ives and including Adams himself, is the goal. “You might have noticed there’s no Beethoven on the concert,” the composer said. Still, in defining any artistic tradition, the logic of masters and masterworks is hard to escape.

That pressure fell on Adams’ own piece, Must the Devil Have All the Good Tunes? A piano concerto of traditional proportions (large orchestra, three movements), the work came into the world practically a standard already. Yuja Wang, Gustavo Dudamel, and the LA Phil gave the premiere and more than a dozen encore performances in 2019, captured on a stellar Deutsche Grammophon recording. This season, Adams is touring the concerto to other American orchestras, with Jeremy Denk the soloist.

The traveling spectacle of the piece is in keeping with the music’s deliberately seedy inspirations. The devil in the title evokes maniacal players of the 19th century, like Paganini and Liszt, and Adams wrote a comparably demanding part for his soloist. Denk settled into a relaxed groove with the low-register action of the opening, titled “Gritty, Funky, but in Strict Tempo.” Echoes of the soloist’s playing, conjured by a honky-tonk keyboard in the orchestra, make the slow, central movement an expressive highlight.

But the concerto’s dominant mode is machine-like. The outer movements grind along — on Friday not always cohering — a vision of hell emphasizing repetition and routine. Only the chord-stomping of the finale’s brief coda sounded truly diabolical.

Repetition was a theme for the evening, with the other pieces curated and conducted by Adams offering their slight variations. Minimalist works by Steve Reich and Philip Glass had an appealing, stark confidence that opened up to something deeper, like the blocks of a Mark Rothko painting. 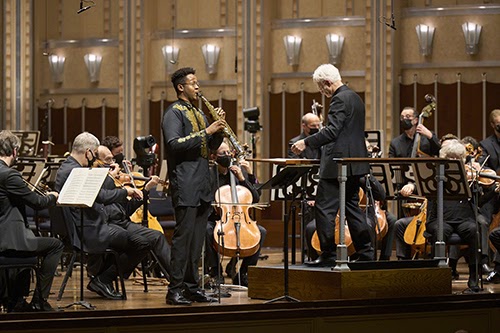 Reich’s Three Movements for Orchestra called for a careful ensemble setup — mallet percussion and pianos up front, each string section divided in half — allowing the composer’s subtle phasing to emerge. The strings were back together for “Façades” (from Glass’s six-movement Glassworks), laying the foundation for what grew into a tone study for soprano saxophonist Steven Banks.

Two pieces by younger composers showed the influence of the older generation, and where those styles have evolved. Carlos Simon’s Fate Now Conquers starts with a minimalist framework but adds concert band embellishments, from runs in the woodwinds to fanfare passages in the brass.

Gabriella Smith’s Tumblebird Contrails is sparse at times but builds the drama effectively to depict a seascape in music. The work produces an unsettling background hum, sometimes overtaken by brass long tones and sometimes by frenzied percussion, sounding more than anything like a Hans Zimmer film score — more music by way of Hollywood.

END_OF_DOCUMENT_TOKEN_TO_BE_REPLACED

Rodgers & Hammerstein’s Cinderella was originally produced for television in 1957 — seven years after the animated Disney film was released — and starred Julie Andrews. According to the Rodgers & Hammerstein website, it was viewed by over 100 million people. END_OF_DOCUMENT_TOKEN_TO_BE_REPLACED

The story line has its origin in an 1855 play and an 1842 farce that Thornton Wilder mined for his 1938 play The Merchant of Yonkers. When that turned out to be a flop, in 1954 Wilder made the crucial decision to re-center the show around the character of the legendary marriage broker Dolly Gallagher Levi and renamed it The Matchmaker. END_OF_DOCUMENT_TOKEN_TO_BE_REPLACED

The Dodero Center for the Performing Arts at the Gilmore Academy in Gates Mills is one feature of an impressive campus. The auditorium is shallow, the stage is deep, and the ensemble played without a shell. Throughout the program, the sound, especially in instruments’ lower registers, tended to disappear. END_OF_DOCUMENT_TOKEN_TO_BE_REPLACED