My first opportunity to talk to Vinay Parameswaran came in the form of a phone call last week, but I already had an impression of what his players in the Cleveland Orchestra Youth Orchestra think of him. In November, violinist Célina Béthoux told me how she had gifted him an origami conductor.

“Last season, some of the seniors gave me thank-you notes, which was also really nice,” Parameswaran told me. “But origami was a new one for me.”

Of course, there are other, more official signs that his tenure has been well received. In February, halfway through his second year, The Cleveland Orchestra extended his contract as Assistant Conductor and COYO Music Director through 2020-2021.

Heading into his latest performance with the younger orchestra on Friday, May 10 at 8:00 pm at Severance Hall — with music by Bartók, Bruch, and Shostakovich — Parameswaran said he continues to enjoy what he does. “One of the best parts of my job is working with COYO every weekend.”

He’s also had an “unbelievable” time learning from Cleveland Orchestra music director Franz Welser-Möst. “I just really appreciate his approach to conducting and to music-making,” Parameswaran said. “It’s always about the music, never about him. He really searches for depth and meaning in the score. Even in the standard works, he’s never bound by these quote-unquote traditions that we’re used to. It’s been a great education for me.” 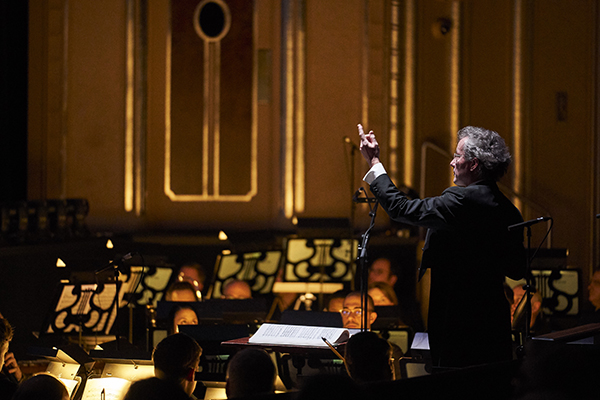 Parameswaran’s favorite moments with The Cleveland Orchestra have been seeing Welser-Möst conduct opera — Janáček’s The Cunning Little Vixen in 2017, Wagner’s Tristan und Isolde in 2018, and Richard Strauss’s Ariadne auf Naxos this past January (above).

“He’s one of the greatest opera conductors in the world,” Parameswaran said. “Tristan was revelatory. The way he was able to shape it, capture the drama, and give the singers exactly what they needed, he just made it look so effortless. And then of course this season with Ariadne — it’s some of the most beautiful music Strauss wrote, and we had an A+ cast. I think I’ll remember that long past my time here in Cleveland.”

Parameswaran has also appreciated Welser-Möst’s generosity with his time, both in answering questions and taking part in COYO’s upcoming European tour, set for June 12-19, with performances in Austria, Slovakia, and Hungary. Welser-Möst will lead the Youth Orchestra in Brahms’ Tragic Overture in Linz. And he’ll coach a joint group of players from COYO and students from the Anton Bruckner Private University in Schubert’s Octet, also to be performed in Linz. “It’s an amazing opportunity for the students,” Parameswaran said. “We’re really grateful.”

The tour repertoire includes works by John Adams and Brahms from earlier in COYO’s season, plus Bartók’s Dance Suite from this Friday’s program. “It’s a piece that I’ve always loved, and for some reason, it’s not played as often as Concerto for Orchestra or Miraculous Mandarin,” Parameswaran said. “It was a really important commission, written for the 50th anniversary of the founding of modern-day Budapest. It’s wonderful that we get to play it there, in the city where it was premiered.”

Bartók’s music has long held a special place in the conductor’s heart. “I think that’s partly from being a pianist and percussionist — there’s so much great stuff he wrote for those instruments,” Parameswaran said. As a student at Brown University, he actually wrote his thesis about Bartók’s percussion writing. “I spent a lot of time looking at his scores, and did a performance of the Two-Piano and Percussion Sonata.” He also played the First Piano Concerto with the orchestra at Brown. “So Bartók’s been a great love of mine since a young age.”

Next on Friday’s program is Bruch’s Scottish Fantasy, featuring COYO violinist Julia Schilz, one of two winners in this year’s concerto competition along with cellist Annie Zhang. “Last year we had co-winners, and this year co-winners again,” Parameswaran said. “It just shows how much talent we have in the group.”

Closing the program is Shostakovich’s Symphony No. 5, a popular suggestion on the players’ annual surveys. “The group this year is one that I thought could tackle it and play it really well,” Parameswaran said. “That combined with the enthusiasm from the students has made for a really fun process.”

Russian politics surround Shostakovich’s music. Parameswaran, who double-majored in political science and music at Brown, finds that aspect compelling. “He was such a spokesman for his time,” the conductor said. “Through his music, you get these wonderful windows into the life he lived and the lives that millions of his fellow Russians lived, through dictatorship and oppression.”

The conductor credits courses in politics and literature for making him a better musician. “I think what was so valuable about being at a place like Brown was taking classes that expanded the way you think and exposed you to different things.” 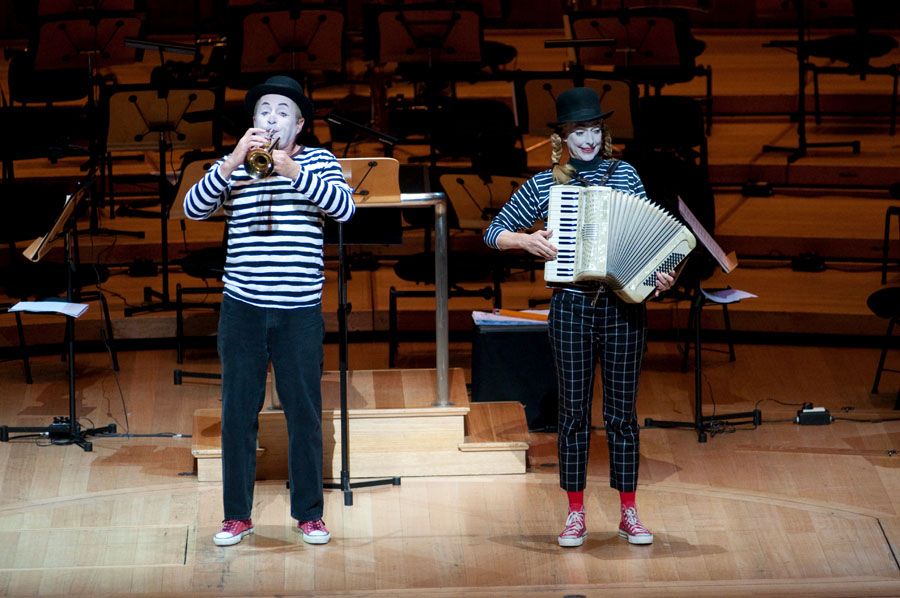 I had to ask Parameswaran one last thing before we ended our conversation. I knew he had collaborated with Maggie Petersen and Doug MacIntyre from Magic Circle Mime Co. as part of a Cleveland Orchestra Family Concert he led this past February. What was it like to work with mimes?

“Oh my god,” he said, laughing, “I think that’s one of the most enjoyable shows I’ve conducted. That was just a blast. It was great music of course, all-Mozart, but Maggie and Doug were so hilarious — I mean, unbelievably funny. The whole orchestra was laughing. I had never worked with mimes before, and I think the toughest part was talking to someone and having them not respond.”

Most of all, Parameswaran appreciated the balance between the two forms of art. “I’ve done some concerts where what’s happening onstage takes away from the music, but what made this a lot of fun is that the music was still the showcase.”

As a prelude to Friday’s main program, a chamber music concert takes place at 7:00 pm in Reinberger Chamber Hall.