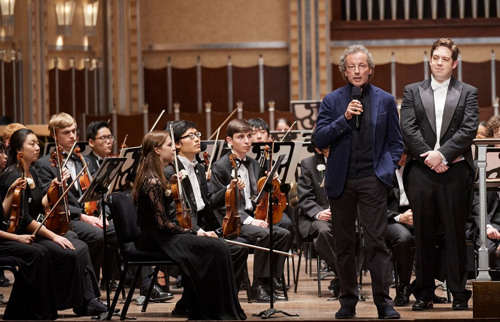 Last Sunday afternoon, May 8, in Severance Hall, the Cleveland Orchestra Youth Orchestra presented the third and final season concert of its 30th-anniversary season under its talented music director, Brett Mitchell. The concert’s stylistic range was remarkable given the age of its participants. In remarks from the stage before the second half, Cleveland Orchestra music director Franz Welser-Möst suggested that more than a few professional orchestras would be challenged to equal COYO’s accomplishments.

Rachmaninoff’s orchestration is luminous. Beautiful woodwind solos abound, including oboe, clarinets, trumpet, bassoon, and contrabassoon. After the middle section, the opening theme returns in more fragmented form, with shimmering solos in the glockenspiel supported by other percussion and strings.

The second movement was poignant, beginning with dark, muted trumpets and stopped horns. Impressionistic woodwind figures offset the ensuing, sad theme in the strings. Many solos in woodwinds and brass lead to a long, thickening crescendo, culminating in a climactic tutti. A restatement of the opening theme leads to a soft dissolution and ends in pregnant silence. 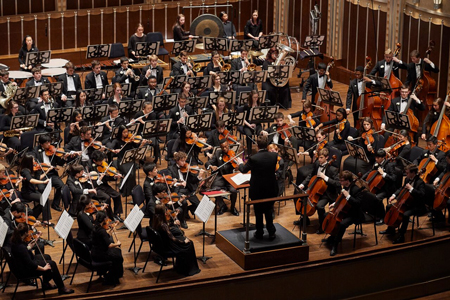 The rapid triple meter in the third movement hurtled forward with hemiolas and wonderful orchestral colors, including chimes and brittle xylophone sounds. After a brooding middle section, Rachmaninoff stunningly quotes the Dies Irae theme with the full brass section. In the aftermath of Judgment Day, the composer turns to the Alleluia theme from his All Night Vigil of 1915 in a kaleidoscope of brilliant orchestral color. Given the Orchestra’s age range of 12-18, their consistent technical skill and maturity of interpretation were amazing.

Erich Wolfgang Korngold’s Violin Concerto in D provided another wonderful highlight. Jieming Tang, the Orchestra’s 18-year-old Assistant Principal First Violin, opened the concerto with poise and masterfully clear tone, negotiating the virtuosic part flawlessly. His performance of the second-theme cadenza included a remarkable array of multiple-stopped passages. The more lyrical second movement featured a fine cello solo and shimmering passages in the vibraphone and percussion. Tang tossed off the difficult harmonics and other virtuoso techniques in the finale with assurance and flair. His colleagues paid tribute to his performance by stamping their feet in appreciation amid the thunderous applause. 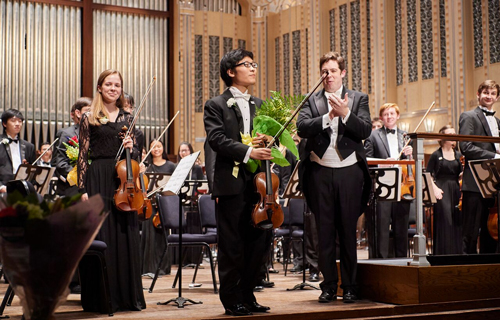 Adam Schoenberg’s Finding Rothko opened the concert. The 2006 piece is a visceral reaction to the composer’s encounter with four paintings by American abstract expressionist Mark Rothko. It is played without pause in four continuous movements, titled “Orange,” “Yellow,” “Red,” and “Wine.”

More a stream-of-consciousness reaction than a portrayal of the art, “Orange” opens with a prominent ascending perfect fifth (the “Rothko Theme”) in the oboe adorned by other high woodwind sounds, piano, vibraphone, and tam-tam rolls. Impressionistic ostinatos mumble in the background in the strings, while ascending French horn glissandos take the foreground. The full orchestral completes the movement.

Unison brasses dominate “Yellow.” High winds join in to create a harmonic milieu of fourths and fifths. After a long crescendo punctuated by short chords, high violin passagework plays against low sostenuto French horns. “Red” reprises the “Rothko Theme,” linking the movements, and seamlessly flows into “Wine,” where the theme dissolves into nothingness.

Jackson began the program with a recitation of Langston Hughes’ poem “Helen Keller” — the first of five poems by Hughes that served as interludes between each piece on the first half. END_OF_DOCUMENT_TOKEN_TO_BE_REPLACED

Pianos with pins and tape on strings, a bass drum and tam tam, crotales, Almglocken, and vibes. Microphones were hooked up all around the instruments. The feed was sent to speakers around the room. Lighting designer Nicholas Houfek hung incandescent globes over the arrangement of instruments from thin black wires stretching across the beams. END_OF_DOCUMENT_TOKEN_TO_BE_REPLACED

From the podium, Elim Chan set an ambitious tone for the evening. The rising star conductor, here in her Cleveland Orchestra debut, has a commanding style, and every twist and turn in Saturday’s performance tracked closely with her baton. END_OF_DOCUMENT_TOKEN_TO_BE_REPLACED