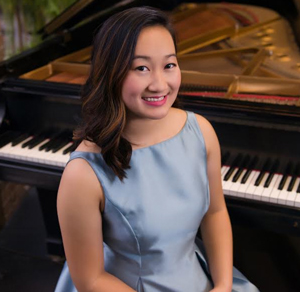 “This concerto is unlike others — it exists on a different playing field,” Catharine Baek said about Maurice Ravel’s challenging Piano Concerto in G. On Friday, May 12 at 8:00 pm, Baek will make her Severance Hall debut as the soloist with the Cleveland Orchestra Youth Orchestra, performing Ravel’s jazz-inspired work. The concert, under the direction of Brett Mitchell, will also include Joan Tower’s Made in America and Sergei Prokofiev’s Symphony No. 5.

Baek, a junior at Willoughby South High School and a second-year member of COYO’s percussion section, earned the opportunity to perform the Ravel by winning the Orchestra’s annual concerto competition. Although it’s not her first time performing a piano concerto with orchestra, she said that this is a unique experience. “It’s a different atmosphere when you’re playing with a bunch of your friends. The rehearsals have been so much fun because Maestro Mitchell brings a special kind of character to the piece. He accentuates all that is Ravel, especially the wit and humor.”

One of many reasons Baek likes the Concerto is its lyrical middle movement. “Unlike string players or vocalists, we don’t often get to sing out melodies, but the way Ravel wrote it really captures the essence of the piano and its ability to sing.”

The Concerto also provides Baek’s percussion section colleagues with plenty to do. “That was only slightly intentional,” she said, “but I know they appreciate getting to play all those great parts that add so many colors that you wouldn’t find in a Mozart concerto.” Regarding the single whip-crack that opens the Ravel — “My friend who’s playing it says it’s her favorite part.”

Among her many accolades, Baek holds the distinction of winning the CIM Preparatory Division Concerto Showcase Competition on two different instruments, performing Mozart’s Piano Concerto No. 23 in 2015 and the toccata movement of Creston’s Concertino for Marimba in 2016. She has participated in summer festivals including Brevard and the Interlochen and Oberlin Percussion Institutes. “This summer I’m going to an institute at Juilliard, and I’m excited to meet other percussionists. I’ve also been invited to the Kent State Piano Institute, and I’ll return to CIM’s Summer Sonata Program.”

But Baek’s musical tastes also extend beyond classical music. “Marching band is a great social experience, and that is what percussionists do in high school. I’ve also played in the pit for some musical theater productions. I listen to just about anything, but I’m not a huge country music fan. I even listen to rap sometimes — I couldn’t live without Hamilton.”

Published on ClevelandClassical.com May 9, 2017.

Jackson began the program with a recitation of Langston Hughes’ poem “Helen Keller” — the first of five poems by Hughes that served as interludes between each piece on the first half. END_OF_DOCUMENT_TOKEN_TO_BE_REPLACED

Pianos with pins and tape on strings, a bass drum and tam tam, crotales, Almglocken, and vibes. Microphones were hooked up all around the instruments. The feed was sent to speakers around the room. Lighting designer Nicholas Houfek hung incandescent globes over the arrangement of instruments from thin black wires stretching across the beams. END_OF_DOCUMENT_TOKEN_TO_BE_REPLACED

From the podium, Elim Chan set an ambitious tone for the evening. The rising star conductor, here in her Cleveland Orchestra debut, has a commanding style, and every twist and turn in Saturday’s performance tracked closely with her baton. END_OF_DOCUMENT_TOKEN_TO_BE_REPLACED