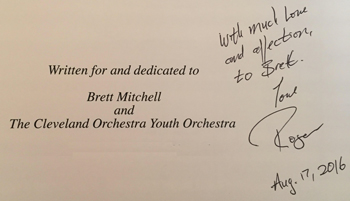 The first in a series of articles highlighting the world premiere of Roger Briggs’ Fountain of Youth.

The prospect of performing a newly-composed work is always exciting. On Friday, November 18 at 8:00 pm at Severance Hall, the Cleveland Orchestra Youth Orchestra (COYO) under the direction of Brett Mitchell will have that opportunity when they present the world premiere of Roger Briggs’ Fountain of Youth, commissioned by COYO. The program will also include Bruckner’s Symphony No. 4 (“Romantic”).

Premiering Briggs’ eighteen-minute tone poem is especially exciting for Brett Mitchell. “It’s impossible to overestimate the impact Roger Briggs had on me,” the conductor said during a telephone conversation. “If it weren’t for the opportunities he provided me, I wouldn’t be here now.”

Mitchell first met Briggs twenty years ago when pursuing his undergraduate degree in composition at Western Washington University, where Briggs was the head of the department as well as director of orchestras. “Roger was my primary composition teacher,” Mitchell said. “I also studied conducting with him and found my way onto the podium more and more as the years went by.”

Mitchell also credits Briggs for encouraging him to continue embracing his love of jazz. “When Roger talked about harmony, he was just as likely to point to recordings by McCoy Tyner as he was to textbooks by Schoenberg and Persichetti. The breadth of his musical knowledge inspired me to not narrow my focus only to classical music.”

The idea to commission Briggs to write a piece for COYO originated after Mitchell sent out an email announcing that his contract with The Cleveland Orchestra had been extended and he would be promoted to associate conductor. Briggs responded with his congratulations, adding that someday he hoped to be able to write a piece for one of Mitchell’s orchestras. “I thought, why wait for someday?” Mitchell recalled. “It would be so special to have my teacher from when I was in my late teens write a piece for me to play with my 17- and 18-year-olds.”

Before getting into rehearsals, Mitchell told his players about Briggs and his music. He noted that one challenge was teaching the young musicians a new musical language. “At the first rehearsal I emphasized that the opportunity to perform a world premiere is rare, but what was about to happen was even more magical — this would be the first time any group of musicians had ever played these notes. We had to make a few stops along the way to pick up the luggage that fell out of the station wagon, but we did get through the whole piece at that rehearsal.” 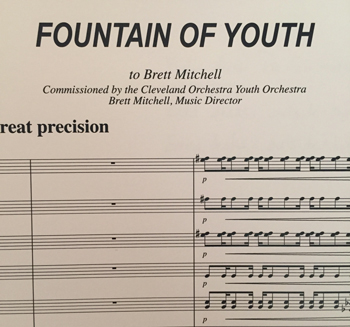 How does the conductor prepare to rehearse a piece of music that has never been seen or heard before? He opens the score and looks at the first page for a few seconds, taking it in with a wide-angle lens. Then he repeats that process until he has been through the entire score. “I want to be sure that I have the overall picture of the piece, because my job is to communicate the essence of it to the musicians and to the audience. And if I’m wrapped up in every little detail from bar one to the end, I won’t be able to see the forest for the trees.”

Mitchell gave some specifics about his experience learning the Briggs. “The first page of the score is marked ‘energetic with great precision,’ and I saw a lot of activity all over the page with changing meters — the strings playing here, and the brass and winds playing there. I noticed how that develops, where it gets smaller, and where it gets thicker. Rehearsal number 22 seems to be a climax, and at number 23 there is a shift into a different texture.”

Mitchell is often asked if it is difficult to conduct a world premiere as there is no recording of the piece. But he said the process is no different from preparing to conduct any piece of music for the first time. “Besides, if you only know a piece of music through a recording, then you don’t actually know the piece, you know somebody’s interpretation of that piece.”

Mitchell and the COYO musicians are having a great time learning Fountain of Youth. “The players are really engaged in the process — they’re asking questions and pointing out inconsistencies. I’ve been communicating with Roger and giving him progress reports. It’s going to be wonderful to get his thoughts when he hears it. But he trusts the process and knows that his baby is safe in our hands.”

Jackson began the program with a recitation of Langston Hughes’ poem “Helen Keller” — the first of five poems by Hughes that served as interludes between each piece on the first half. END_OF_DOCUMENT_TOKEN_TO_BE_REPLACED

Pianos with pins and tape on strings, a bass drum and tam tam, crotales, Almglocken, and vibes. Microphones were hooked up all around the instruments. The feed was sent to speakers around the room. Lighting designer Nicholas Houfek hung incandescent globes over the arrangement of instruments from thin black wires stretching across the beams. END_OF_DOCUMENT_TOKEN_TO_BE_REPLACED

From the podium, Elim Chan set an ambitious tone for the evening. The rising star conductor, here in her Cleveland Orchestra debut, has a commanding style, and every twist and turn in Saturday’s performance tracked closely with her baton. END_OF_DOCUMENT_TOKEN_TO_BE_REPLACED