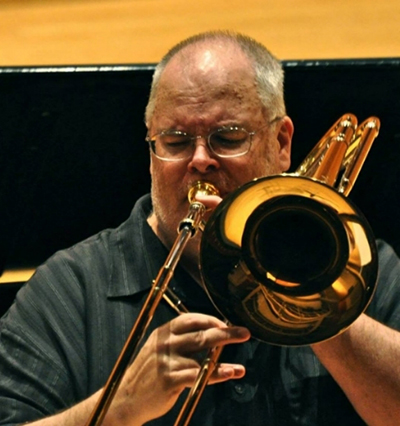 Last week, as part of the seventh annual Cleveland Trombone Seminar, a concert by Mark Lancaster Lusk took listeners into the heart of the brass player’s world: a region dominated by vocal music, modernist explorations, and jazz.

Lusk, professor of trombone at Penn State University, surrounded himself with members of PSU’s Trombone Choir to open the June 20 program in Cleveland State’s Drinko Hall. Eleven players laid down a steely pad of sound as their teacher, playing bass trombone, launched into the melody of the “Simple Song” from Bernstein’s Mass. Projected supertitles added welcome context — for instance, Lusk soared above a glorious chord on what turned out to be the word “God.” With minimal vibrato, tasteful bends of pitch, and a soft, even slightly fuzzy tone, Lusk showed off the bass instrument’s ability to sing.

In general, brass players revel in their instruments’ similarity to the voice. Many practice using exercises intended for opera singers, and some transcribe art songs to make up for the relative lack of lyricism in their instruments’ repertory. Lusk brought a fine poetic sensibility to his performance of three songs from Vaughan Williams’s The House of Life, and he had an ideal collaborator in pianist Deborah Yatsuke. Though a glitch in pitch marred a climactic upward leap, “Silent Noon” found the pair utterly united in interpretation. “Heart’s Haven” and “Love’s Last Gift” both feature some excellent writing for the piano, which Yatsuke handled with elegance and expertise.

Richard Monaco’s mid-century Sonata for Trombone and Piano is a product of its time. With debts to jazz, Hindemith, and academic modernism, its first movement served as a high-wire exercise for Lusk, now bringing a warm sound to the tenor trombone. Challenges pervade the entire piece, and in the very brief second movement, Lusk looked strained. The third movement was the highlight, Lusk and Yatsuke delivering a sharp, intense rendition. Every time Lusk returned to the odd-meter musical motto of the movement, it sounded fresh.

The concert ended with transcriptions of recordings by the great jazz trombonist J.J. Johnson, with Lusk joined by pianist Anthony Fuoco, bassist Aidan Plank, drummer Jim Rupp, and conga player Dylan Moffitt, each of them “playing” a musician who recorded with Johnson. The balance would have been better without bass amplification; otherwise, the group was a well-oiled machine. Lusk remained true to the vibrant yet tasteful bebop style that Johnson helped pioneer, and Fuoco stood out for his especially sensitive playing. Tenor saxophonist Chris Burge helped bring the recital to a close by joining the quintet for Johnson’s Groovin’, a blues tune that found the players dragging rhythms in perfect sync. For the final statement of the melody, Burge and Lusk merged their tenor sax and trombone tones into a sort of meta-instrument.

Jackson began the program with a recitation of Langston Hughes’ poem “Helen Keller” — the first of five poems by Hughes that served as interludes between each piece on the first half. END_OF_DOCUMENT_TOKEN_TO_BE_REPLACED

Pianos with pins and tape on strings, a bass drum and tam tam, crotales, Almglocken, and vibes. Microphones were hooked up all around the instruments. The feed was sent to speakers around the room. Lighting designer Nicholas Houfek hung incandescent globes over the arrangement of instruments from thin black wires stretching across the beams. END_OF_DOCUMENT_TOKEN_TO_BE_REPLACED

From the podium, Elim Chan set an ambitious tone for the evening. The rising star conductor, here in her Cleveland Orchestra debut, has a commanding style, and every twist and turn in Saturday’s performance tracked closely with her baton. END_OF_DOCUMENT_TOKEN_TO_BE_REPLACED