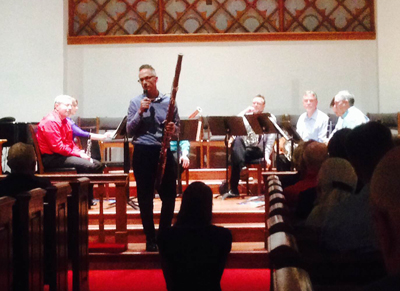 They should do this more often. Making only their second group appearance, the Cleveland Wind Octet — including members of The Cleveland Orchestra and a couple of esteemed local friends — brought the crowd to its feet at Chagrin Falls’ United Methodist Church last Friday. Performances of a classic, an arrangement, and a new piece composed by one of the group’s own were sublime.

Presented by Chagrin Arts, the program began with Four Lyric Pieces, a Willard Elliot arrangement of four of Edvard Grieg’s 66 short works for solo piano (composed across 10 volumes and 24 years). You’d have to be heartless not to fall for these pieces’ charms, especially in their colorful wind-octet clothes and in the hands of these superb players.

Two waltzes make up the middle movements of Elliot’s arrangement. “Nocturne,” an Op. 54 partner of “Shepherd’s Boy,” feels like a kicked-back night at sea. Smith and McKelway led the way through the cheeky “Remembrances,” the last piece in Grieg’s collection (and the composer’s look back on the melody in the very first).

It can’t get more memorable than “Wedding Day at Troldhaugen,” a Grieg gem the composer wrote in celebration of his 25th wedding anniversary. McKelway elated on the E-flat clarinet, a nice touch of arrangement, and nifty articulated gestures from Hawkins evoked a wedding’s chasing children. Meanwhile, TCO French hornists Richard King and Alan DeMattia shone with smooth beauty, perfect blend, and tense, watchful calls. Taking a pinch of time before the melody’s last go-around, the group seemed reluctant to let it go, seemingly in touch with the composer’s own wistfulness.

Rathbun spoke after the Grieg, saying, “For those of us in orchestras, it’s always a pleasure to play in a smaller group like this.” He drew laughter as he introduced the next piece on the program “by an obscure composer,” he said modestly. It was his own very impressive Rocky River Music, premiered last year. The first movement, “Danger,” begins with deep, strong bassoons and nervous pitter-patter from the upper winds. The horns and clarinets did their best sneaking through a snakelike melody, and Stees capped things off with a smoky solo.

Rathbun and McKelway, from opposite ends of the octet semicircle, called back and forth to each other compellingly in “Humanity.” The group overcame some minor rhythmic imperfections in “Fearless” to conjure a cinematic, starlit dance, instruments entering unexpectedly and seeming to float around in space.

The Octet’s Mozart’s Serenade in c, K. 388 was so good, you wanted to hear every moment again. The opening chords were strong and solemn performed at the group’s dignified tempo. McKelway and Hawkins followed up with whispery intensity, and soon thereafter, Rathbun turned the key deftly to Eb major.

In the third movement, Stees sang out with lovely high notes, and in the double reeds’ extended section alone, they warmed the room like a hot tub. The closing Allegro had sass, focus, verve, and of course, the Octet’s elite touches of time and phrase. This was no tired concert. From piece to piece and detail to detail, these players were fired up.

END_OF_DOCUMENT_TOKEN_TO_BE_REPLACED

Rodgers & Hammerstein’s Cinderella was originally produced for television in 1957 — seven years after the animated Disney film was released — and starred Julie Andrews. According to the Rodgers & Hammerstein website, it was viewed by over 100 million people. END_OF_DOCUMENT_TOKEN_TO_BE_REPLACED

The story line has its origin in an 1855 play and an 1842 farce that Thornton Wilder mined for his 1938 play The Merchant of Yonkers. When that turned out to be a flop, in 1954 Wilder made the crucial decision to re-center the show around the character of the legendary marriage broker Dolly Gallagher Levi and renamed it The Matchmaker. END_OF_DOCUMENT_TOKEN_TO_BE_REPLACED

The Dodero Center for the Performing Arts at the Gilmore Academy in Gates Mills is one feature of an impressive campus. The auditorium is shallow, the stage is deep, and the ensemble played without a shell. Throughout the program, the sound, especially in instruments’ lower registers, tended to disappear. END_OF_DOCUMENT_TOKEN_TO_BE_REPLACED