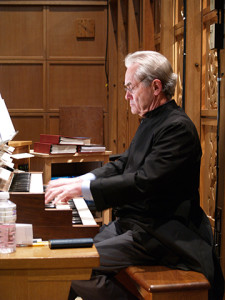 On Sunday afternoon, October 1, Karel Paukert was featured in the final concert of the Ars Organi series at St. Paul’s Episcopal Church in Cleveland Heights. He was joined by the St. Paul’s Choir and guest artists from Kent State University for a program that included Baroque, Romantic, and modern repertoire. The afternoon’s highlight was the reprise of Frank Wiley’s Labyrinths (2017) for clarinet, viola, percussion, three organs, five solo women’s voices, and supporting vocal ensemble, written for Paukert and premiered last January. The piece visits labyrinth walking, a process that fosters a slow-paced retreat from the busy modern lifestyle to a more meditative state. Wiley teaches at Kent, where he co-directs the university’s New Music Ensemble.

Designed for the church, the work derives some of its spatial power from the location of St. Paul’s three organs — in front, in the rear choir loft, and in the transept on stage left. The performance had a ceremonial quality, supported by the location of the instrumental soloists: viola on stage right, clarinet on stage left, and percussion at rear stage right. The vocalists were dispersed throughout the hall. Near the end, the soloists walked gravely from stage to the rear in two symmetrical lines.

Though Labyrinths’ main structural principle is sound mass (the generation of textures in which details are submerged in the sustained flow), Wiley uses coloristic differences to distinguish musical events. The three organs and the Tibetan prayer bowl provided the sustained wash, but ringing, bell-like sounds from vibraphone, and bells carried by the female singers, clarinetist, and violist, created an enchantingly transparent tapestry. The singers projected strongly at times to overlay the texture.

Paukert’s rapid virtuosic cadenza formed the middle section, followed by a short return to the opening material and the soloists’ recessional. The powerful work elicited a standing ovation.

Paukert opened the afternoon with a solo recital. Bach’s substantial Toccata, Adagio and Fugue begins with a fast duple meter replete with virtuosic sixteenth notes. The second section smooths out the edges with eighth note motion, but the sixteenths reappear. After a stately triple-metered Adagio, the syncopated Fugue periodically recalls Toccata themes. The performance was a delight.

Liszt’s Prelude and Fugue on the Name of BACH derives its chromatic Fugue subject from Bach’s initials. The bravura Prelude features many stops and starts and chromatic sequences. Paukert used a charming throaty registration for the more delicate section.

Photo: Paukert interviewed by Timothy Robson before the premiere of Labyrinths in January, 2017 (credit Nicole Keller).

The cimbalom was the feature of the show, an instrument capable of taking on many personas. Its performer, Chester Englander, has shaped his career around the instrument, and has inspired composers to write more repertoire for it, some of which was presented on the program. END_OF_DOCUMENT_TOKEN_TO_BE_REPLACED

You wouldn’t expect that acoustic from a glance at the nave, which is wide and long, but not especially lofty. But when I guest conducted a local amateur choir and professional orchestra in Beethoven’s Mass in C there a few years back, during the first rehearsal we released the final chord of the “Gloria” and listened in astonishment for the next several seconds. The sound continued to roll down the space like the big wave that surfers dream about. END_OF_DOCUMENT_TOKEN_TO_BE_REPLACED