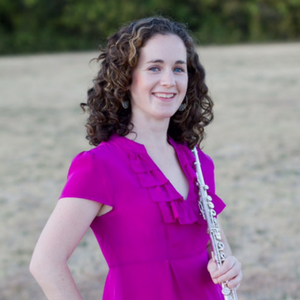 “Until I joined CYO I wasn’t aware of the world of contemporary music,” flutist Sarah Frisof said by telephone. “But by the time I went to Eastman, I already had my ears opened to listening to music differently. I would credit my time in the orchestra with making that happen.”

On Saturday, December 9 at 7:00 pm in CSU’s Waetjen Auditorium, the Contemporary Youth Orchestra under the direction of Liza Grossman welcomes back alumna Sarah Frisof as soloist in Joan Tower’s Flute Concerto for its first concert of the season. The evening also features a second solo work, Ralph Vaughan Williams’ beautifully pastoral Oboe Concerto, performed by the Orchestra’s concerto competition winner Kate Young. The program will include Mason Bates’ The B-Sides, Clint Needham’s Free Radicals, and Arturo Márquez’s Danzón No. 2. Tickets are available online.

Frisof was CYO’s charter principal flute, as well as the Orchestra’s second concerto competition winner with the Nielsen Concerto. She said that CYO gave her an opportunity to be in a leadership role. “At that time I struggled with performance anxiety, and being able to sit principal and lead the section contributed to my growth in confidence as a musician. Liza brings a genuine enthusiasm to the music, and being exposed to that attitude helped me to put things in perspective.”

The flutist said that she looks forward to performing Joan Tower’s Concerto. “I think it is one of the best concerti written for the flute in the last 20-some years. It explores the full range of what the instrument can do. I’m also interested in promoting programming that is more balanced in terms of diversity, so the opportunity to play a concerto by such an esteemed female composer is a great thing.”

Frisof feels fortunate to have grown up in Cleveland. “I had the best flute teachers — Bill Hebert, Martha Aarons, and Mary Kay Fink. In addition to CYO I also played in the Cleveland Orchestra Youth Orchestra and in wind symphony. Saturdays were busy, but it was the best education anyone could have before going to college.”

Conductor and CYO founder Liza Grossman said that she looks forward to reuniting with Frisof. “This concert is very near and dear to me,” Grossman said by telephone. “I worked with Sarah even before CYO was founded and she was a musician’s musician from the beginning. Her parents helped me start CYO, and Sarah’s siblings were both in the orchestra, so this is a relationship that runs long and deep.”

Grossman pointed out that another CYO alum will be performing on Saturday’s concert. “Mason Bates’ B-sides includes electronics, and Jacob Duber will be coming back with his laptop. Jacob was a violinist and is currently studying composition and electronic music at the University of Cincinnati — College-Conservatory of Music.” 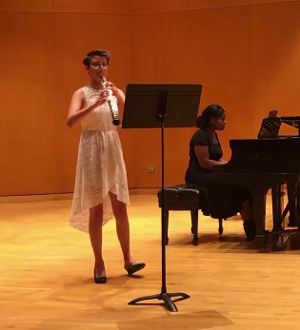 Oboist Kate Young also finds Liza Grossman to be a source of inspiration. “Liza will encourage and do everything in her power to make anyone’s musical aspirations a reality,” the Strongsville High School senior said during a recent interview. “I could never imagine her saying ‘that’s not possible’ to anyone with a dream. For someone who is as passionate as I am about contemporary music, I think it is inspiring to be around someone who believes in you to that extent.”

A native of Stevens Point, Wisconsin, Young credits CYO for making her move to Cleveland easier. “I didn’t want to leave the place I grew up, especially at the end of high school. Being musicians, my parents knew that Cleveland was one of the best places to be, so they brought me here to see all the great opportunities, and on that trip we went to a CYO rehearsal. We were just expecting to listen, but during a break, one of the oboists said to Liza, ‘Why doesn’t she come up and play?’ so I sat in with the orchestra and it was really fun.”

Young, who studies with Cleveland Orchestra assistant principal oboe Jeffrey Rathbun, said she started learning the Vaughan Williams Concerto a year and a half ago. “I thought it would be a good piece to take my musicianship to another level. I studied it on and off since the summer of 2016, but when I really started to learn it I realized how much I can do with the piece. The concerto has a lot of interesting tonalities and at first I wasn’t sure how to give it direction, but that challenge kept me working on it.”

Young said that her first instrument was the violin, which she has played since she was five. Why the oboe? “I was playing in my school orchestra but when I had the opportunity be in the school band, I was drawn to the woodwind section. I didn’t want to play the flute or clarinet so I thought that maybe I would play the bassoon, but my mom was an oboist so we had an instrument in the house. She taught me how to work with the reeds, and before I knew it I was in my community band and having a blast. Mom jokes that every beginning oboist needs an artist-in-residence in their house.”

Young’s interest in contemporary music was fueled by her father, who taught music theory and is well-versed in jazz. “I would ask him if we could improvise even back when I played violin. It was fun, even though I didn’t have an understanding of what I was doing. I thought it would be cool to be a rock star oboist, but that is not going to happen, so when I discovered CYO I thought, this is what I have been looking for. It became a reason why I embraced my move.”

Although she intends to pursue music in college, Young said she is looking at schools that will provide her with the opportunity to study other disciplines as well. “I have a lot of interests, like Spanish and visual art —  I’m not a musician machine.”

END_OF_DOCUMENT_TOKEN_TO_BE_REPLACED

The Orpheus myth inspired French Baroque composers Jean-Philippe Rameau and Philippe Courbois to write expressive solo cantatas about the famous Greek musician-poet and his futile attempts — because of his own impatience — to rescue his beloved Eurydice from the grasp of Pluto in the Underworld. These are beautifully performed by the clear-voiced soprano Hannah De Priest and the velvet-throated baritone Jonathan Woody (who makes a walk-on appearance in the Rameau). END_OF_DOCUMENT_TOKEN_TO_BE_REPLACED

Now that live concerts are beginning to proliferate, it was delightful to hear Oberlin cello professor Darrett Adkins ring a change on the solo suite format with his Hypersuite No. 3 on September 28 in the Cirigliano Studio Theatre at Lorain County Community College. His program opened the new season of Signature Series performances in Elyria, and was dedicated to the memory of Eva Hornyak. END_OF_DOCUMENT_TOKEN_TO_BE_REPLACED