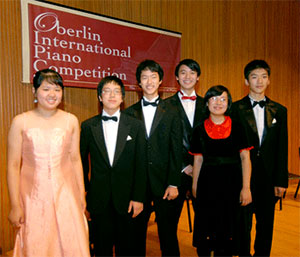 An earlier group of winners

This Thursday afternoon, more than forty young pianists from seven countries will arrive in Oberlin to compete in a new and much enhanced version of the Oberlin International Piano Competition. Launched in 1995 by Oberlin Conservatory piano professor Robert Shannon, that competition for 13-18 year old pianists continued annually through 2008, when Warner Concert Hall was closed for renovations.

Reborn in 2010 as the Thomas and Evon Cooper International Competition, the contest will now alternate each year between pianists and violinists, with pianists up in 2010 and violinists in 2011. Cash prizes of more than $20,000 and Oberlin scholarships will be distributed among the winners, and the first prize winner will have the opportunity to perform with professional orchestras in Beijing and Shanghai. And in another big leap forward for its inaugural year, the Competition has made arrangements for the three finalists to play their concertos in Severance Hall with the Cleveland Orchestra under Jahja Ling.

We spoke with Robert Shannon by phone in his office at the Oberlin Conservatory to ask how this all came about.

“Before 1995, we had had a summer piano festival that had no age requirements and no focus at all. You’d come and you’d take some lessons, and you’d go to a lecture or two. We had lawyers from San Francisco who had never played the piano before! We wanted to upgrade this, and establish an age group of 13-18 — which is of course the group of people we either want to get excited about Oberlin or recruit from. There are many youth competitions now, but in 1995 that wasn’t really true. We thought we could combine having a competition with more educational programs so people would come here for a about a week and nobody would really lose because they could all learn something while they were here. That’s always been my dream”.

Eventually, contest and education achieved separate but related lives, and the educational component turned into The Oberlin Piano Festival. “They used to happen at exactly the same time but now the Festival starts in the middle and goes a little later. There are no lectures or master classes until the Festival starts after the first round of the competition”. The overlap allows for some very interesting cross-pollination between two groups of people — the second group comprising about twenty additional students.

“The idea of the Festival was always to highlight something good about the Conservatory — and there a lot of good things there — so we’ve been able to do a lot, from single composer festivals to a program called ‘What Just Happened?’ about contemporary music. Two years ago we did Messiaen and everything centered around that. This year, the obvious thing to highlight was jazz, because our new jazz building just opened.”

Meanwhile, the Competition was also in the process of evolving, and got a huge burst of new energy from Thomas and Evon Cooper of Boston. “This was an initiative of David Stahl, Dean of the Conservatory, who of all the administrators who ever had anything to do with this was the one who saw the potential of the competition”. Stahl approached Thomas Cooper, an Oberlin Trustee whose wife happens to be a pianist, to propose a major endowment gift. “Mr. Cooper believes in high level competition”. And Stahl also successfully pitched the competition to The Cleveland Orchestra. This made Shannon very happy.  “I was overjoyed that they were excited to do it — not just willing, but excited. I think that Welser-Möst would have conducted if the date had worked out, but we’re delighted to have gotten Jahja Ling”. The Coopers plan to attend the Severance Hall performances.

The forty-three competitors — 20 from the US, 10 from China, 5 from Korea, and one each from Finland, Italy, Mexico, the United Kingdom and Ukraine — begin playing 20-minute slots in the first rounds of the contest on Friday, when each contestant is required to perform a lyrical work from a list of pieces by Chopin, Mendelssohn and Schumann, the first movement of a classical Sonata by Mozart, Haydn, Beethoven and Schubert, and a work of their choosing. Each competitor is expected to have 40 minutes worth of music at the ready in addition to a concerto.

Other competitions establish the performance order by drawing lots, but Shannon draws up the schedule himself with particular sensitivity to young pianists’ body time and jet lag. “Asians get to play the afternoon of the last day of a round, which is only fair. Californians and Western Canadians play in the evening. People from Eastern and Midwestern time zones get to go on first.”

About fifteen pianists will advance to round two, where judges will choose pieces from their repertory lists. Then ten pianists will advance to the concerto rounds on Tuesday, July 27 — when the orchestral parts will be played by a second pianist — and to the solo finals round on Wednesday, July 28. Three of the ten will then go on to play the final round with The Cleveland Orchestra on Friday, July 30 in Severance Hall.

An additional concert in Reinberger Chamber Hall at Severance Hall on Friday afternoon at 3 will be devoted to performers chosen by the judges, part of Shannon’s plan that nobody loses this week. “Very often somebody will play one thing really well and other things not so well, and because they’re not so consistent, they don’t advance. But usually they have something they play that’s really good. So we’ve had a tradition of putting all those things together on a concert. Very often that concert is the high point of the week, because by then the pressure is off, people are very relaxed and they play the hell out of their pieces. The consistency of excellence can be even better than in the finals”.

Even though this is a junior competition, Shannon predicts from long experience that the intensity will be similar to competitions slated for 18-30 year olds. “The repertory is remarkably similar — all the big ‘bow-wow’ pieces of the repertory are in there and the concertos are pretty much the same. The level of the highest performers will be pretty comparable.”

Shannon’s original philosophy for the Oberlin Piano Competition still holds true for the Cooper. “At this age, you’re not weeding out people who should have careers. You’re trying to promote excellence and encourage activity — you want these people to go on. While thirteen-year olds sometimes win, there’s no predictor of what’s going to happen between 13 and 25 — and 26 is when it starts to matter.”

ClevelandClassical.com will be blogging from the Competition beginning on Tuesday, July 26 and continuing through the Severance Hall finals on July 28.