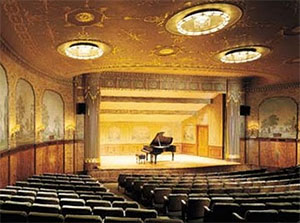 Sixteen young pianists who didn’t advance to the finals in the Cooper International Competition this week were invited by the jury to play one standout work in their repertory in Reinberger Chamber Hall at Severance Hall on Friday afternoon, July 30, for an audience of family, friends and the general public. In format, the event looked something like the periodic recitals everyone’s childhood piano teacher put together, but John Thompson’s Fourth Grade Book was nowhere to be seen; the repertory was world class and most of the playing was on the level you’d expect from the 18-30 crowd at an international contest.

Fifteen pianists took the stage in tag team style, and in what turned out to be a mini-Liszt festival, eight of them performed works by that celebrated Hungarian master. Playing with a lovely tone and good, even voicing, Jee Min Lee (13, from) Korea attractively rustled the forest leaves in the Concert Etude Waldesrauschen. Su Yeon Kim (16, from Korea) was elegant in demeanor and rich in tone in her depiction of the Fountains of the Villa d’Este. Playing with focused power, Visa Sippola (16, Finland) impressively produced torrents of notes in the Transcendental Etude No. 4, “Mazeppa”. Bolai Cao (13, from China), obviously one to watch in the future, blazed through the Tarantella from Venezia e Napoli with clean, controlled technique and expressive rhythm.

There was more for Liszt fans in the second half. A fine sense of line and texture (including well shaped, flutey runs) permeated the Hungarian Rhapsody No. 10, as performed by Leonardo Collafelice (14, Italy). Brian Lin (18, from Texas) perfectly caught the spirit of the Paganini Etude No. 3, “La Campanella”, creating amazing trills and tintinnabulations. Fantee Jones (16, from California) transported us to the opera stage with the “Rigoletto” Paraphrase, except here it was the rich-toned pianist who was the diva. And Ming Xie (16, from China) energetically — and later, lyrically — danced with the devil in the Mephisto Waltz.

Following in Liszt’s stylistic footsteps, Ferrucio Busoni created a delightful romp through familiar tunes in his Fantasie on Bizet’s “Carmen”, and He Ren (15, from China) caught its humor and Iberian spirit in a performance full of life and character.

The elder statesmen of the piano repertory were represented by Mozart, Beethoven, Mendelssohn and Schumann. Sun Hwa Kim (18, from Korea) began the afternoon with a lyrical and nicely phrased performance of Mendelssohn’s Song Without Words, op. 38/6. To the first movement of Beethoven’s Sonata in E-flat, op. 31/3, Yon-Joon Yoon (17, from Maryland) brought a nice sense of tone and color; as he gets older, he’ll figure out ways to connect Beethoven’s mercurial changes of mood. Chelsea Wang (16, from Iowa) delivered a radiant performance of Mozart’s Sonata in B-flat, replete with beautifully shaped phrases and sparkling runs. Xuesha Hu (17, from China) interpreted the first movement of Schumann’s Sonata No. 2 on a large, dramatic scale with nice contrasts in color and dynamics. (Fifi Zhang (17, from Virginia) was scheduled to play the first movement of Beethoven’s Sonata in E, op. 109, but didn’t appear).

Two more recent works, Ravel’s Toccata from Le Tombeau de Couperin and Russian pianist Arcadi Volodos’ (b. 1972) version of Mozart’s Rondo alla Turca, rounded out the afternoon. Shizhe Shen (15, from the U.K.) has strong and fleet fingers and deployed them well in a rhythmic if slightly heavy account of the Ravel. Jiawei Yuan (17, a second year student at Oberlin) took us on a wild ride through Volodos’ quirky arrangement of Mozart, but pulled everything back into focus in the lyrical middle section.

This was our first opportunity to hear those contestants who had been eliminated before we joined the competition on Tuesday afternoon, and in some cases our second chance to hear players who didn’t advance after the concerto round. Given some of the distinguished playing we heard, we wondered what kept them from appearing in later rounds. But remember, these were, in the opinion of the jury, the best pieces individuals had in their pockets. Perhaps they weren’t so consistent in other repertory. In any event, it was good to hear for ourselves how deep the talent pool was for this competition — only a few hours before the final three would play with The Cleveland Orchestra — and to enjoy two hours’ worth of piano music being played now just for the fun of it.

END_OF_DOCUMENT_TOKEN_TO_BE_REPLACED

The portents weren’t good for the week of March 8: first the disorienting switch to Daylight time was to click in on Sunday, then a full moon would rise on Tuesday, then the 13th of the month was scheduled to fall on Friday. Midweek, the spread of COVID-19 added a spiraling series of postponements, cancellations, and shut-downs to an already unlucky period. Like other educational institutions, Oberlin College and Conservatory found themselves making decisions about how to proceed, only to change plans several times. END_OF_DOCUMENT_TOKEN_TO_BE_REPLACED

That old saw about absence making the heart grow fonder: how true it feels now! With concerts canceled to prevent the kinds of confined massing that facilitates the spread of COVID-19, musicians are suffering. Critics have already filed reports on the grim uncanniness of clear schedules and empty halls. Just before this writer’s exile from the scene, however, a spark of life shot skyward, and now stands as a last memory of live performance before social distancing. END_OF_DOCUMENT_TOKEN_TO_BE_REPLACED

The Cleveland Chamber Music Society sailed into relatively uncharted waters on March 3, hosting the Bay Area male vocal ensemble Chanticleer in “Trade Winds.” This musical voyage took its name from a triptych by Zhou Tian, part of a varied program that called in at multiple ports for Italian madrigals, settings of Ave Maris stella (“Hail Mary, Star of the Sea”), an Edwardian part song, a Portuguese Mass, songs from the Pacific, and English sea shanties. END_OF_DOCUMENT_TOKEN_TO_BE_REPLACED