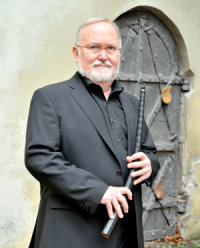 Now that the greater Cleveland area can boast housing two significant organs tuned in mean-tone temperament, early music fans can enjoy the unusual opportunity of hearing a pair of nearly back-to-back recitals featuring the celebrated cornettist Bruce Dickey and his distinguished associate, organist Lieuwe Tamminga. Dickey and Tamminga will perform on Friday evening, October 10 at 7:30 pm in Fairchild Chapel at Oberlin College and again on Sunday afternoon, October 12 at 2:00 pm at the Church of the Covenant in University Circle.

The Fairchild organ was built in 1981 by John Brombaugh. The Covenant instrument, the work of the firm of Richards, Fowkes Co., is more recent, having been dedicated in May of 2013. Both organs eschew equal or “well” tuning systems in favor of the “just” tuning system common in the late middle ages and Renaissance which produces pure intervals in a limited number of keys.

That tuning system favors a partnership with the cornetto, a curved wooden instrument usually covered with leather, fingered like a recorder but with a small, trumpet-like mouthpiece that formed the upper voices of Renaissance wind bands and doubled the upper voice parts in church music, most famously in Monteverdi’s Vespers of 1610.

The agility of the instrument and its ability to play florid melodic lines with the quality and power of a singing voice are illustrated in Dickey and Tamminga’s recent recording, La Bella Minuta: Florid Songs for Cornetto Around 1600 (reviewed in this publication.)

Dickey was urged to take up the cornetto by his colleague Michael Lynn when the two were undergraduates at Indiana University. He initially resisted, but finally gave in to the allure of the instrument when he was sidelined with a touch football injury (read that story in a 2010 interview with Dickey in this publication). He eventually relocated to Bologna, Italy, where he formed the Renaissance wind band Concerto Palatino with sackbut player Charles Toet. 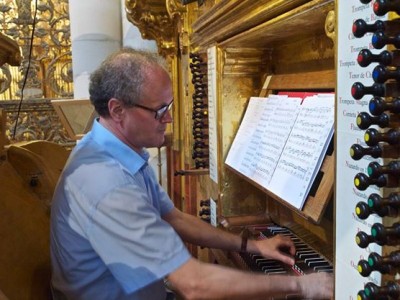 Lieuwe Tamminga presides over historic organs dating from 1471-75 and 1596 at the Basilica of San Petronio in Bologna, a position he shares with Luigi Ferdinando Tagliavini.

Bruce Dickey will also be featured in four upcoming performances of the Monteverdi Vespers with Apollo’s Fire beginning on October 31.

The Oberlin and Cleveland performances are free. Dickey will also give free master classes on Wednesday, October 8 at 6:30 pm in Stull Recital Hall at the Oberlin Conservatory and on Thursday, October 9 at 12:30 in Harkness Chapel on the Case Western Reserve University campus.

END_OF_DOCUMENT_TOKEN_TO_BE_REPLACED

Rodgers & Hammerstein’s Cinderella was originally produced for television in 1957 — seven years after the animated Disney film was released — and starred Julie Andrews. According to the Rodgers & Hammerstein website, it was viewed by over 100 million people. END_OF_DOCUMENT_TOKEN_TO_BE_REPLACED

The story line has its origin in an 1855 play and an 1842 farce that Thornton Wilder mined for his 1938 play The Merchant of Yonkers. When that turned out to be a flop, in 1954 Wilder made the crucial decision to re-center the show around the character of the legendary marriage broker Dolly Gallagher Levi and renamed it The Matchmaker. END_OF_DOCUMENT_TOKEN_TO_BE_REPLACED

The Dodero Center for the Performing Arts at the Gilmore Academy in Gates Mills is one feature of an impressive campus. The auditorium is shallow, the stage is deep, and the ensemble played without a shell. Throughout the program, the sound, especially in instruments’ lower registers, tended to disappear. END_OF_DOCUMENT_TOKEN_TO_BE_REPLACED