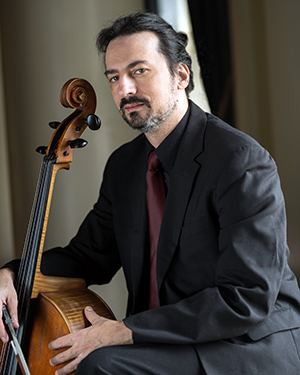 Cahn-Lipman obtained instrumental parts from IMSLP, the Petrucci digital library, a godsend for performing artists. “We’re actually playing the Emperor Waltz from what may be Schoenberg’s original manuscript.”

The Ford Family Theater has imposed a limit of 125 attendees for the Sunday performance, which provides an interesting parallel to Schoenberg’s organization, whose membership fluctuated between 175 and 250. Other interesting features of the Vienna meetings included the banning of the press, the announcement of programs only on the evening of the performance (to prevent attendees from cherry-picking what pieces they wanted to hear), and an interdiction against applause, because the programs were about the music and not about the performers. 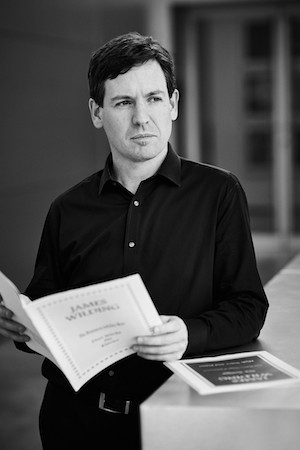 In addition to those Schoenberg arrangements, the program will include a premiere by South African-born composer Jamie Wilding, who serves on the faculty of the University of Akron. Wilding said in a telephone conversation that the idea for his new work, The Garden Had Fallen Still, came to him in a dream.

“A few months ago, I dreamt that I was writing a composition for various instruments that were spread out in small groups — COVID era style — in a beautiful garden. I woke up thinking the usual confident composer thing: ‘That was an amazing piece. I’ll just go and write it down.’”

Things don’t work out like that. “All I could remember is that the garden was there, which made me think of Yeats’ The Cap and Bells, kind of a symbolist dream poem I started setting when I was a student. It begins, The jester walked in the garden: / The garden had fallen still.”

Wilding went on to say that his wife, Dana piano professor Caroline Oltmanns, had a conversation with Cahn-Lipman a few days later in which they talked about putting together the chamber ensemble for the May 2 concert and looking for an extra piece to program. Oltmanns asked her husband, “Why don’t you write something?” Wilding replied, “I just dreamt about it two nights ago, so I guess that’s what it’s going to be.”

Wilding was struck by how well his dream poem fit the circumstances. “A variety of musicians spread out all over the stage in a medium-sized hall sounds like the image of that garden.”

The composer will conduct his new work, something that wasn’t originally in the plans. “I realized at the first rehearsal — while sitting quietly in the house as composers are supposed to do — that I had put way too many tempo changes in the score. Eventually they asked me to conduct.” Ironically, the Viennese works were originally scheduled to be conducted, but due to a faculty retirement, the ensemble decided to play them as chamber music.

One detail of instrumentation has been difficult to resolve. The Viennese pieces call for strings, flute, oboe, clarinet, horn, trombone, tuba, percussion, guitar, piano, and harmonium — the European variety rather than the reed organs Americans are used to.

Cahn-Lipman is using a synthesizer with a European harmonium patch. Alas, that robs Wilding of one special effect he had planned. “I had planned for the sound of pumping air before the tone begins.” As a tradeoff, Wilding, who has built a small collection of African instruments, has written a part for the mbira, which Oltmanns will play in alternation with the piano. “I had to figure out how to amplify it, so I came up with a cute little mic that clips on that’s connected to a big speaker.”

Both Cahn-Lipman and Wilding are thrilled that Sunday’s performance will include an audience. “It makes me feel like we’re coming to the end of this pandemic,” Cahn-Lipman said.