The principal players from Earth and Air will join the Camerata in a free concert this Friday, April 5 at 7:30 pm in Harkness Chapel at Case. The program includes Sibelius’ Andante Festivo and Rakastava, Nielsen’s Little Suite, Svendsen’s Two Swedish Folk Melodies, and selections from Reinecke’s Serenade in g.

Those composers’ lives overlapped by nearly 50 years, and their home countries of Finland, Denmark, Norway, and Germany all border the Baltic Sea. “There is a lot of that environment in their music,” Ellis said. “There’s something about that scenery, especially when it gets cold, that really does connect them.”

Of course, Germany is still an outlier among those countries, including the music of Carl Reinecke. “He represents the staunch, Germanic, Romantic style,” Ellis said. “The idea here is to show all the composers that moved away from that, and to see the similarities and differences.”

Ellis pointed out that some pieces written for string orchestra can be regarded as exercises meant to prepare composers for writing full orchestral works. “Think about the Mendelssohn String Symphonies, which were very early in his career, and the Dvořák Serenade, which was relatively early for him,” Ellis said. “But here we start getting into an era where composers are writing for string orchestra specifically for its color.”

The Sibelius works on the program do have some percussion parts, but Ellis has elected to leave them out due to lack of space onstage. “It’s definitely much more of a logistical reason than an artistic one,” he said. “I don’t want a bunch of Finnish people calling me up saying, ‘What are you doing not having the timpani!’ It’s important to recognize that Rakastava is very well-regarded in Finnish culture, so we’ve been making sure that the music is held in a certain reverence.”

Getting back to his own path to becoming a conductor, I asked Ellis how he reached the point that he could feel confident on the podium. “I found continuo practice to be a very good way of getting to know more repertoire, and learning how to accompany different instruments,” he said. “That really lent itself well to directing an orchestra.” 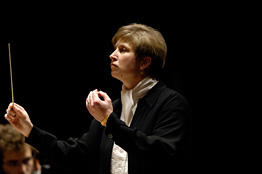 At some point, he also realized he should focus more on efficiency — a lesson he learned from Bridget-Michaele Reischl, a former professor of conducting at Oberlin. “I never formally studied with her, but I took some of her classes in my freshman and sophomore years,” Ellis said. “And then studying with Tim Weiss later on, I realized that’s also how he views himself on the podium.”

When the time came to start charting a career as a conductor, Ellis felt a desire to bring something new to the community rather than join a pre-existing group. “That’s where Earth and Air came from,” he said. “There are a lot of string players in Cleveland, but there wasn’t a strings-only orchestra.”

Next came the opportunity to lead the Case Camerata, a group which is open to all CWRU students, faculty, and community members by audition. “It’s been a very good match — a lot of fun,” Ellis said. “It’s an outside-of-work environment for them to enjoy the music thoroughly.”

What has Ellis noticed about bringing together the two ensembles? “It’s been really nice for the Camerata to have voices of input that are not me.” He mentioned the sectional coachings the Earth and Air players have given in the past couple weeks. “The music on this program is very nuanced, which really requires more individual attention. It’s been nice to have these very accomplished players help out.”

The cimbalom was the feature of the show, an instrument capable of taking on many personas. Its performer, Chester Englander, has shaped his career around the instrument, and has inspired composers to write more repertoire for it, some of which was presented on the program. END_OF_DOCUMENT_TOKEN_TO_BE_REPLACED

You wouldn’t expect that acoustic from a glance at the nave, which is wide and long, but not especially lofty. But when I guest conducted a local amateur choir and professional orchestra in Beethoven’s Mass in C there a few years back, during the first rehearsal we released the final chord of the “Gloria” and listened in astonishment for the next several seconds. The sound continued to roll down the space like the big wave that surfers dream about. END_OF_DOCUMENT_TOKEN_TO_BE_REPLACED