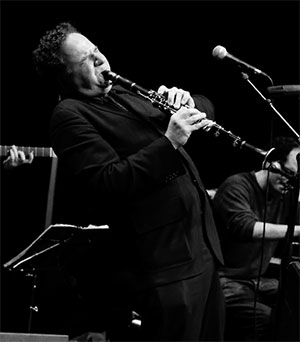 We will be playing a mixture of my compositions along with traditional Klezmer songs. It does have the new Klezmer approach, but it is acoustic. It’s kind of on the chamber music side.  I’ve been offering this group to smaller venues or venues that are acoustically suited for a string quartet. When you start bringing in things like a full drum set, electric guitar, samples and everybody amplified, it’s just too much.
MT: A couple years back, you wrote an article called “Reflections of being a 21st Century Klezmer Musician. I’m not sure if you remember it or not?

DK: Oh I sure do, it was a beautiful day in Riverside Park and I was under this deadline and I needed to write this for some program notes. I remember that the sun was setting and I got out my notebook and wrote it.

MT: It is really quite good. I enjoyed reading it. In it you say there are two important parts of playing Klezmer, one is to preserve the Jewishness and two is to make sure that it does not stay in the museum. Can you tell me how you go about keeping it out of the museum?

DK: People of my generation who are playing this music are faced with a kind of an esthetic dilemma. This music comes from an oral tradition, but that oral tradition was interrupted for people of my generation because of the Holocaust, then Stalin and then through general assimilation. My grandparents’ and great grandparents’ generations came to the United States at the beginning of the last century. They had endured terrible hardship and anti-Semitism in Belarus and Poland, so they just said we’re done with Yiddish, we’re done with Klezmer. We’re done with anything having to do with this culture.

Then when people of my generation began to come to this music in the late 1980’s, we are saying wow! there is this culture. I can hear a trace of it in my grandmother’s thick Yiddish accent. As I have gone along I see more traces of it in families, in how they talk and how they think. So again, people from my generation have had to do a lot of archeology just to listen to this music. It was not like growing up we heard Jewish music at every wedding we attended. We first had to find the records and then reconstruct the music.

There is that part, but at the same time we are living in the 21st century. I think it is important to make something new and different. Keeping the old pieces of pretty music the same simply by copying the recordings would be keeping it in the museum. I do think there is a place for that and I think people have done creative things with that approach. Kind of like playing baroque music on period instruments, as opposed to performing programs the mix classical music with contemporary and ones own music. Many people in the new classical genre are doing just that, and doing so keeps classical music out of the museum. So that is how I keep it out of the museum, having one foot in the past and one foot in the future.

MT: You also continue to keep a foot in the classical music world. I believe you were part for the Aspen Wind Quintet?

DK: Yes I was. We won the Naumburg Chamber Music Competition back in 1984.

MT: When did you become interested in Klezmer and what attracted you to it?

DK: I was actually about 30 years old back in the late 1980’s. I already had a career going in classical music. As I said, the wind quintet had won the Naumburg, I had won the Concert Artist Guild award. I was doing a lot of recitals, as well as attending the Marlboro Music Festival, playing chamber music with Rudolph Serkin, as well as performing in wind groups that were conducted by the legendary flutist, Marcel Moyse. Growing up I also studied jazz, but I had abandoned jazz when I started pursuing my classical career. I started to begin to feel like I needed to go back to creating my own music, and suddenly, through a series of chance meetings, I started playing Klezmer. This made sense to me, because it was a way to explore my own culture, and sort of reclaim something that I felt was mine. It was something that belonged to my culture. As I said before, it was a lost culture for me anyway. I still collaborate with quartets like the Emerson, the Tokyo, and the Orion, playing pieces such as the Brahms clarinet quintet as well as other masterpieces of the great chamber music literature. The composer David del Tredici wrote a quintet for me and the Orion Quartet recently.

MT: When you move from one genre to the other, what do you change in your approach to playing?

DK: I absolutely change. I use a different mouthpiece for Klezmer, and therefore I also change the reed, because you need to have the mouthpiece/reed marriage that works. This gives me a completely different feeling when I play and it also gives me a completely different sound. If I tried to play classical music with a Klezmer sound, it would be ridiculous, and vice versa. It would just be wrong. When I work with students I usually have to talk a lot about sound. When students come to me who have been playing Klezmer, they all have a very distinctive jazz sound. Vibrato, the whole nine yards. I need to tell them no, this is the wrong sound. It’s like trying to play a Beethoven symphony with a jazz sound. It’s just plain wrong.

MT: Do you always use the same clarinet?

DK: Yes, I use a Selmer, and Privilege is the name of the model.

DK: I always use the same strength, a number 4, which surprises many people, because to them it seems kind of hard. But with the right mouthpiece it feels just fine. I do need to play with a harder reed because it gives me the power that I need to play very high in the register.

MT: Thank you so much for taking the time to talk, this conversation has been most enjoyable. Is there anything else you would like to add?

DK: Something that I think you might enjoy knowing about is a project that I really love, something call Abraham Inc. In this project I collaborate with a young Jewish Hip-Hop renegade rapper named Socalled. He creates beats by taking samples of old Klezmer records. The great trombonist Fred Wesley is also part of this. He has performed with James Brown, Bootsy Collins and Parliament Funkadelic. It is amazing to be able to work with these guys. They both bring their own incredible cultural traditions. Also, recently the young Polish composer, Wald Marhulets, composed a concerto for Klezmer clarinet and orchestra that I performed with the Detroit Symphony and Leonard Slatkin. It is great that these new pieces continue to be written and projects like Abraham Inc. are happening, because they take old forms and give them a 21st century relevance. I like that.

END_OF_DOCUMENT_TOKEN_TO_BE_REPLACED

Rodgers & Hammerstein’s Cinderella was originally produced for television in 1957 — seven years after the animated Disney film was released — and starred Julie Andrews. According to the Rodgers & Hammerstein website, it was viewed by over 100 million people. END_OF_DOCUMENT_TOKEN_TO_BE_REPLACED

The story line has its origin in an 1855 play and an 1842 farce that Thornton Wilder mined for his 1938 play The Merchant of Yonkers. When that turned out to be a flop, in 1954 Wilder made the crucial decision to re-center the show around the character of the legendary marriage broker Dolly Gallagher Levi and renamed it The Matchmaker. END_OF_DOCUMENT_TOKEN_TO_BE_REPLACED

The Dodero Center for the Performing Arts at the Gilmore Academy in Gates Mills is one feature of an impressive campus. The auditorium is shallow, the stage is deep, and the ensemble played without a shell. Throughout the program, the sound, especially in instruments’ lower registers, tended to disappear. END_OF_DOCUMENT_TOKEN_TO_BE_REPLACED